"It's job done and now it's on to Montenegro" | Diane Caldwell

"It's job done and now it's on to Montenegro" | Diane Caldwell

Caldwell's first-half goal was enough to give Vera Pauw's side a 1-0 win over the Greeks, who had scored a late equaliser against the Girls in Green last November.

Ireland are second in Group I with 10 points from a possible 12 but they still have to play top seeds Germany home and away.

Caldwell, winning her 75th cap got on the end of a header from her central defensive partner Louise Quinn.

"We worked a lot on our set-pieces, we've obviously tried to hit Louise with her height, she's so dangerous from the set pieces.

"We tried to hit her back post and we worked on me just following in on that ball whether or not she can get it goalward or just knock it down for me to be there in the right place and it was funny how it all worked out, just as we planned." 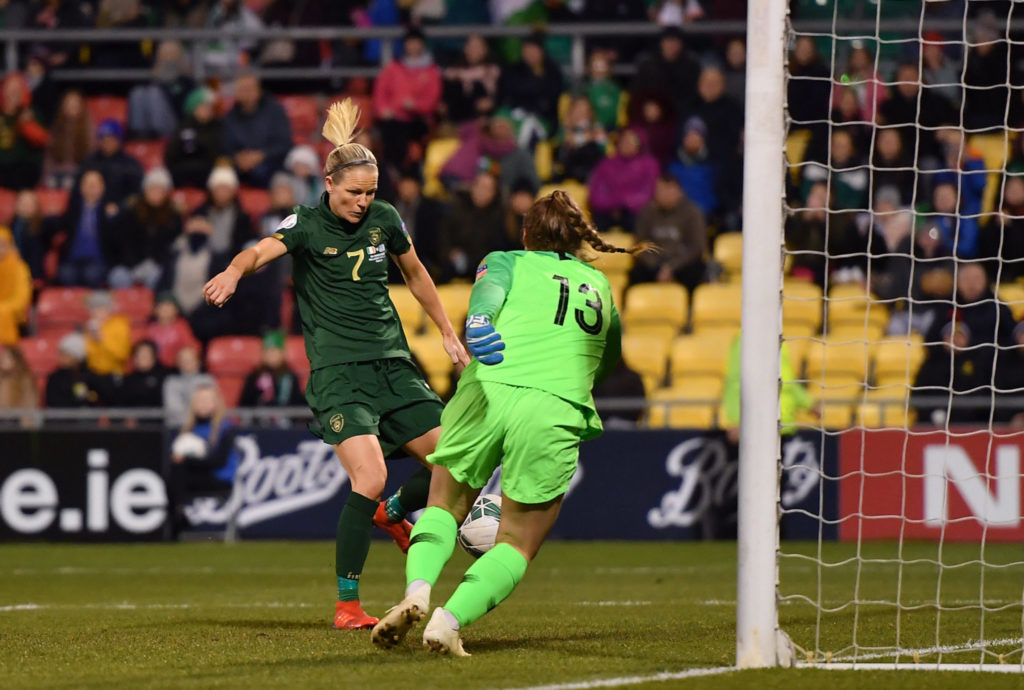 Diane Caldwell of Republic of Ireland shoots to score her side's first goal, past Anthi Papakonstantinou of Greece

It was only Caldwell's second international goal, something the SC Sand defender wants to improve on.

"It was a long time ago (first goal), it was against Northern Ireland so it's nice to get on the scoresheet.

"It's not often I score but I need to improve on that and be a bit more dangerous on attacking set-pieces so I was very happy with the goal.

"I didn't quite know what to do, my girlfriend was in the crowd so I wanted to go over to her and dedicate the goal to her because she made the journey from Germany."

Vera Pauw's side couldn't find the second goal but unlike the previous meeting between the two, there was no sting in the tail.

"Defensively we're really solid from the top all the way through the team to the defence, that's our strength.

"We don't score many so that's what we have to work on.

"There was a sense of deja vu when it's only 1-0 and then they start to put a bit more pressure on and send numbers up but we learned a thing from Greece as you can see.

Attention now turns to Wednesday's qualifier away to Montenegro, with Caldwell in line to add to her 75 caps in the green jersey.

"I'm really proud, every cap I'm really honoured to have so it's obviously nice to get it capped off with a goal as well.

"Today was just all about the three points, it's job done and now it's on to Montenegro because we have to win again.