The All-Ireland football final of 1998 was the game in focus on the Classic Game Club on this mor...

The All-Ireland football final of 1998 was the game in focus on the Classic Game Club on this morning's OTB AM - when Galway toppled a great Kildare side.

It was John O'Mahony versus Mick O'Dwyer, and it was the Tribesmen's first Sam Maguire triumph in 32 years, with Michael Donnellan's solo run one of the moments well remembered 22 years on.

It was September 27th, 1998 and ultimately an excellent second-half display earned Galway a 1-14 to 1-10 win over the Lilywhites.

Ger Gilroy, Eoin Sheahan, and Tommy Rooney watched the game back in its entirety for us on the Classic Game Club, and all in all gave the 70 minutes the two thumbs up.

Eoin says the context of the two teams involved gave it more allure than a regular All-Ireland final pairing.

"Martin Breheny in the Irish Independent did a list of the greatest All-Ireland finals of all time, somehow Galway and Kildare manages to come third in this list!

"There's a lot to talk about when it comes to this All-Ireland final - except for the actual football, which is grand. Galway are really good to watch, but you could watch any other Galway game from this era and say it's as good.

"You've got the Michael Donnellan solo run so there are of course great moments in it, but I just think it's the lore of this Galway team that makes them so special.

"And the fact that Kildare are in an All-Ireland final within the last 25 years - a novel pairing. It's exciting!"

So just what made the final so great?

The quality of football:

Bear in mind this was before the days of blanket defences, sweeping goalkeepers and other modern twists on the gaelic football genre, and Tommy says it's hard to ignore the fact that the quality on display in the '98 decider was of a pretty high standard. 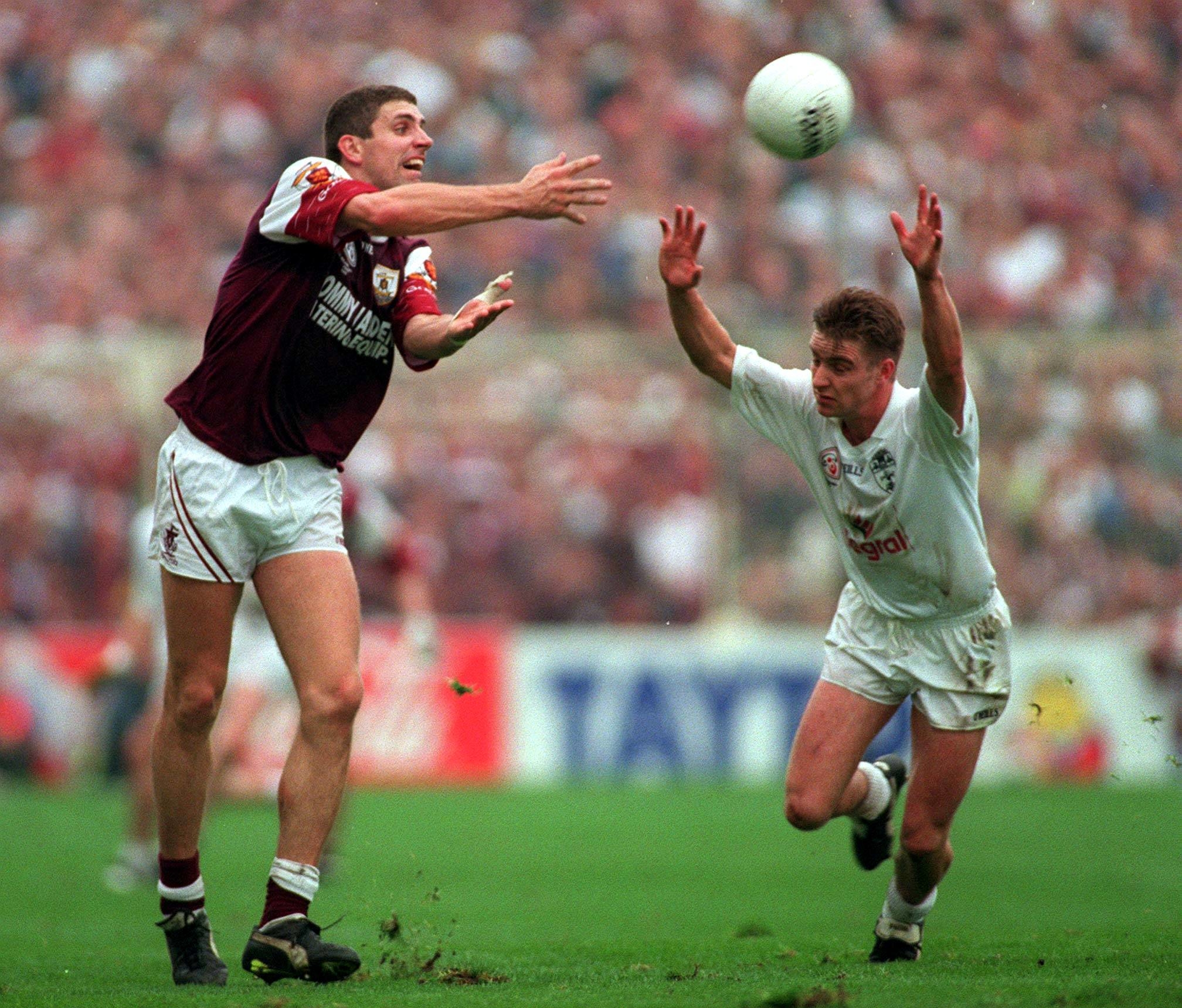 A tough watch for Kildare fans:

Ger managed to watch this game back for the first time since seeing it live, and that can't have been easy for a Lilywhite.

"I was at this game, I was reporting for FM104, and I was at every game that year, I covered the whole thing.

"At that stage, this was back in the glory days of journalism where you could walk into dressing rooms after matches. I had been at every Kildare match and in the changing room after every game, and at some training sessions in the build-up to it.

"It's very hard for me to put this in any other context... in the 1990s, Kildare were the Mayo of that decade. At the start of the decade Micko [O'Dwyer] arrived.

"They reached a league final in his first season, and then he left and Dermot Earley came in, and Micko eventually came back.

"In retrospect I think the [Kildare] '97 team was better than the '98 team, particularly the '98 final team because of the injuries some key players had.

What makes the Kildare team of that era different to recent teams in white? Ger has a hypothesis.

"That team you saw in '98 was a team of men, and the team under Kieran [McGeeney] had several men in it, probably was short one or two absolute bastards that it needed to get over the line.

"Everybody says it... Kildare are too nice. Everybody would be happy to have those lads home to meet the parents. Whereas actually, that's not what you want. What you want are a team of killers.

The Tuam Stars clubman excelled on the day for the westerners, hitting three points in front of the crowd of almost 66,000 at Croke Park, and Ger says it's a display he will never forget.

"I actually think that second-half performance from Ja Fallon is one of the greatest 35 minutes of individual sport I have ever bore witness to.

"Ja Fallon looked at Kildare and with his bare hands ripped their heart out, and feasted on it in front of their children. He was the one who killed us.

"Shoulders slumped as Fallon hit one first from the left-hand side and then the right-hand side.

"There weren't many lads kicking it from the touchline in the 90s!" 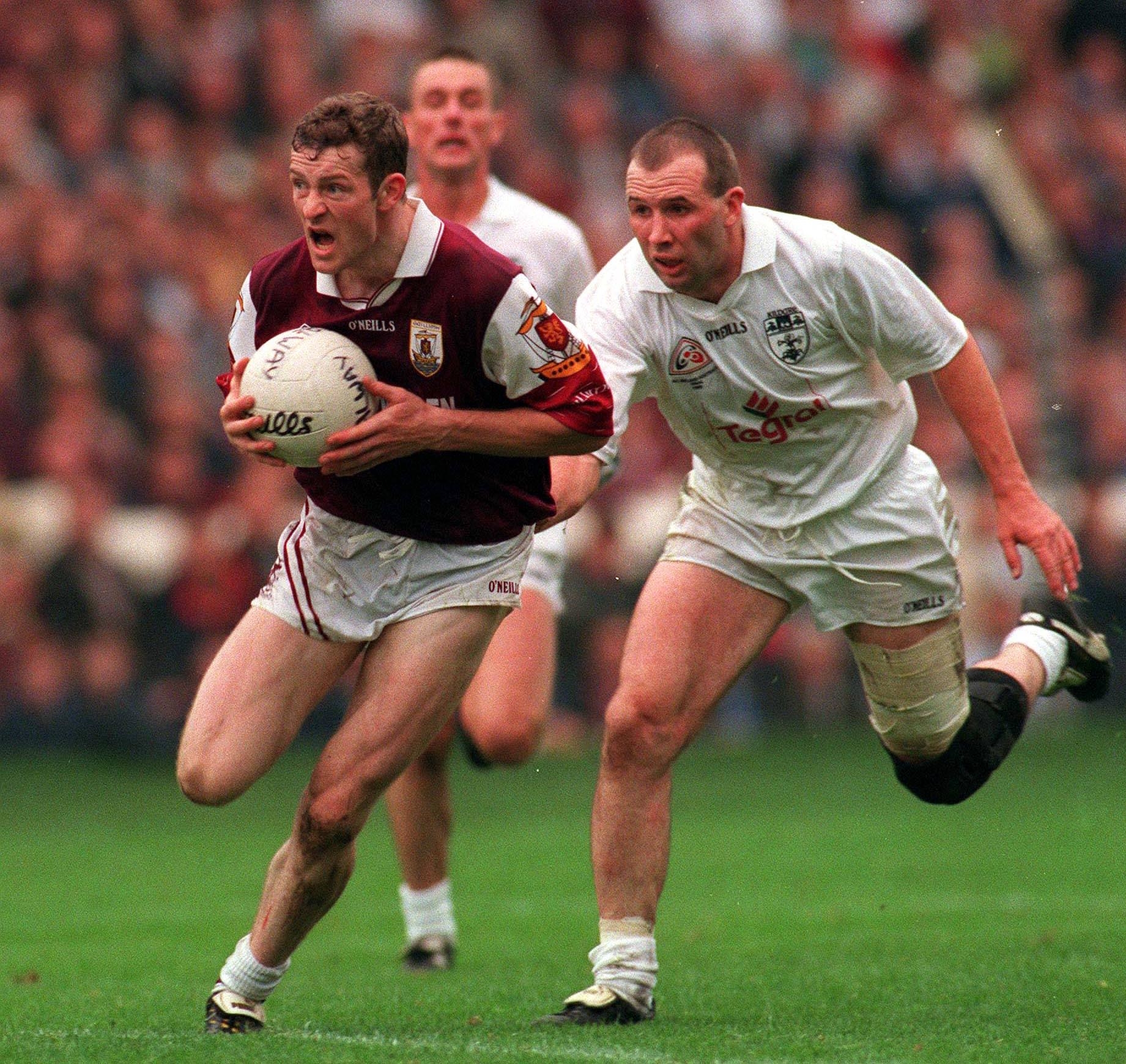 27 September 1998, Jarlath Fallon of Galway in action against Glenn Ryan of Kildare during the All-Ireland Senior Football Final match between Galway and Kildare at Croke Park in Dublin. Photo by Brendan Moran/SPORTSFILE

The then-Dunmore MacHales man picks the ball up in his own half early in the game, exchanging passes with Kevin Walsh in midfield, before a mazy run that ultimately leads to a score for his teammate Seán Óg de Paor.

Ger says he had thought it was actually later in the game per his memory.

"I didn't remember that the [Michael] Donnellan run happened so early in the game, in my head it's part of that second-half!

"I'm not even sure it was the moment of Michael Donnellan's game though!"

Eoin referenced a poll 15 years ago that solidified the moment as the best of all-time in gaelic football.

"I remember watching this event... Maurice Fitz's sideline point came in number two, beaten by Michael Donnellan's solo run. It was like a moment planned, there was an RTÉ banquet on in Galway that night!"

And Tommy says it was actually something that happened a few minutes after the solo run that impressed him the most.

"I kinda thought that Donnellan run ended a little differently than it did, when it started I was like 'Oh it was this early!', and when it finished... it was a lovely little score, but I was a little underwhelmed. It was his chip-up a few minutes later that made him stand out as different class.

"He just looked to be playing a level above other players."

THE OTB LUNCHTIME WRAP - Kiernan ruled out of World Cup playoff, Ireland to play Norway and Malta in friendly matches