With just three days until the close of nominations, only 33% of Ireland's General Election 2020 ...

With just three days until the close of nominations, only 33% of Ireland's General Election 2020 candidates are women.

Under new legislation, political parties face losing half of their funding if at least 30% of their candidates are not female. That quota will rise to 40% for the next election.

On Newstalk Breakfast with Susan Keogh this morning, Women for Election CEO Ciairín de Buis said some of the larger parties appear to view the quota as “the bare minimum” rather than the target.

“The two larger parties are just tipping into that 30%,” she said.

“The smaller parties are doing much, much better,” she said. “By-and-large they are in or around 40% - with the Social Democrats soaring ahead at 60%.

“You have to wonder, if all of those smaller parties can find women who are politically engaged, who are interested, who have the skills, who are willing to put their name on the ticket – why can’t the larger parties?”

Can we make history in #GE20?
We are calling on all parties to aim for 40% gender balance among their candidates this year.
Nominations close on Jan 21st. There's still time to see lots #MoreWomen on the ballot in #GE2020. pic.twitter.com/wdgsuJnqD3

She said Ireland has a “significant problem” when it comes to gender in politics – with women making up more than half the population and less than one-quarter of our elected politicians.

Susan recently ran an Instagram poll asking women if they would consider a life of politics – with 87% of the 231 women who responded saying they wouldn’t.

THREAD: I’ve been running a poll asking women on my Instagram would they consider a career in politics. A resounding No is the answer for a myriad of reasons but childcare & culture coming up a lot. Also the fear of online abuse & harassment 🗳 #Newstalk #MoreWomen #GE2020 pic.twitter.com/clbNmgzSG5

Ms de Buis said there are five main barriers for women considering a career in politics.

she said academic research and the results of the last local and general election have shown that women are just likely to get elected as men - if they are put forward as candidates.

“If you take the local elections, the number of councillors elected by party, generally reflected the number of women they were running.

“Again the smaller parties ran more women. The Green Party had around 40% women and around 40% of their councillors are women. Similarly the Labour Party.

“So the barrier to women is not actually getting elected. The barrier is getting on the ticket.” 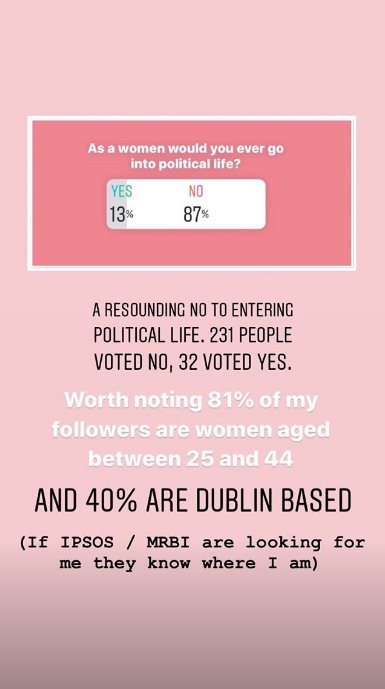 She said there is still time for Fine Gael and Fianna Fáil to rectify the gender imbalance amongst their candidates and voiced hope that some new names will be put forward before the deadline.

“In our training sessions, we hear from trainers and those with expertise in campaigning as well as elected politicians.

“The political parties need to ask a woman to run.”

The closing date for nominations for General Election 2020 is Wednesday, January 20th.

You can listen back to Susan's full interview with Women for Election CEO Ciairín de Buis here: