Immunologist Dr Lara Dungan has said approval could be sought for a coronavirus vaccine in as lit...

Immunologist Dr Lara Dungan has said approval could be sought for a coronavirus vaccine in as little as a few weeks.

It comes after US pharmaceutical giant Pfizer and German firm BioNTech have announced the first interim results from their large-scale trials.

They said the candidate was effective for more than nine out of 10 people in the trial who had not been infected before.

It is a far higher efficacy rate than many experts had hoped for - with regulators prepared to accept a vaccine that is just 50% effective.

The European Union has already bought 200 million doses of the vaccine with the option to buy another 100 million.

"Pfizer and BioNTech - who is the German company that they're working with - they've put out a press release, they have not put out the raw data.

"So we have not seen the published, raw data in a peer review paper.

"But it has been looked at by an independent panel of scientists, who have assessed to see whether or not it looks real or looks useful.

"And the bottom line is that they are saying this vaccine prevents coronavirus in 90% of the people who take it."

"We do know a lot - there's 43,500 people who were given the first dose of the vaccine - this is what we call an MRNA vaccine - so it's never been brought into any real vaccine in any humans before.

"This would be the first time that an MRNA vaccine was approved by the FDA [US Food and Drug Administration] if this was to get approved.

"They've gotten their second dose, which is given 21 days later in over 38,000 people, and they have used a hugely diverse background.

"They say 42% of the people who received this vaccine are from ethnicities other than Caucasian.

"And they have also done it in a wide age range as well.

"So it does look like it's reasonably efficacious across the board, is what it seems to be saying at the moment".

What is in the vaccine?

She said some of the wording can be confusing - as some people received a placebo.

"Of those 94 people, 90% of them are in the group that didn't get the real vaccine - [they] got the placebo vaccine.

"So less than 10% of them - that's about nine people - are in the group that got the real vaccine.

"They word it in an incredibly difficult manner, but it's actually quite simple. 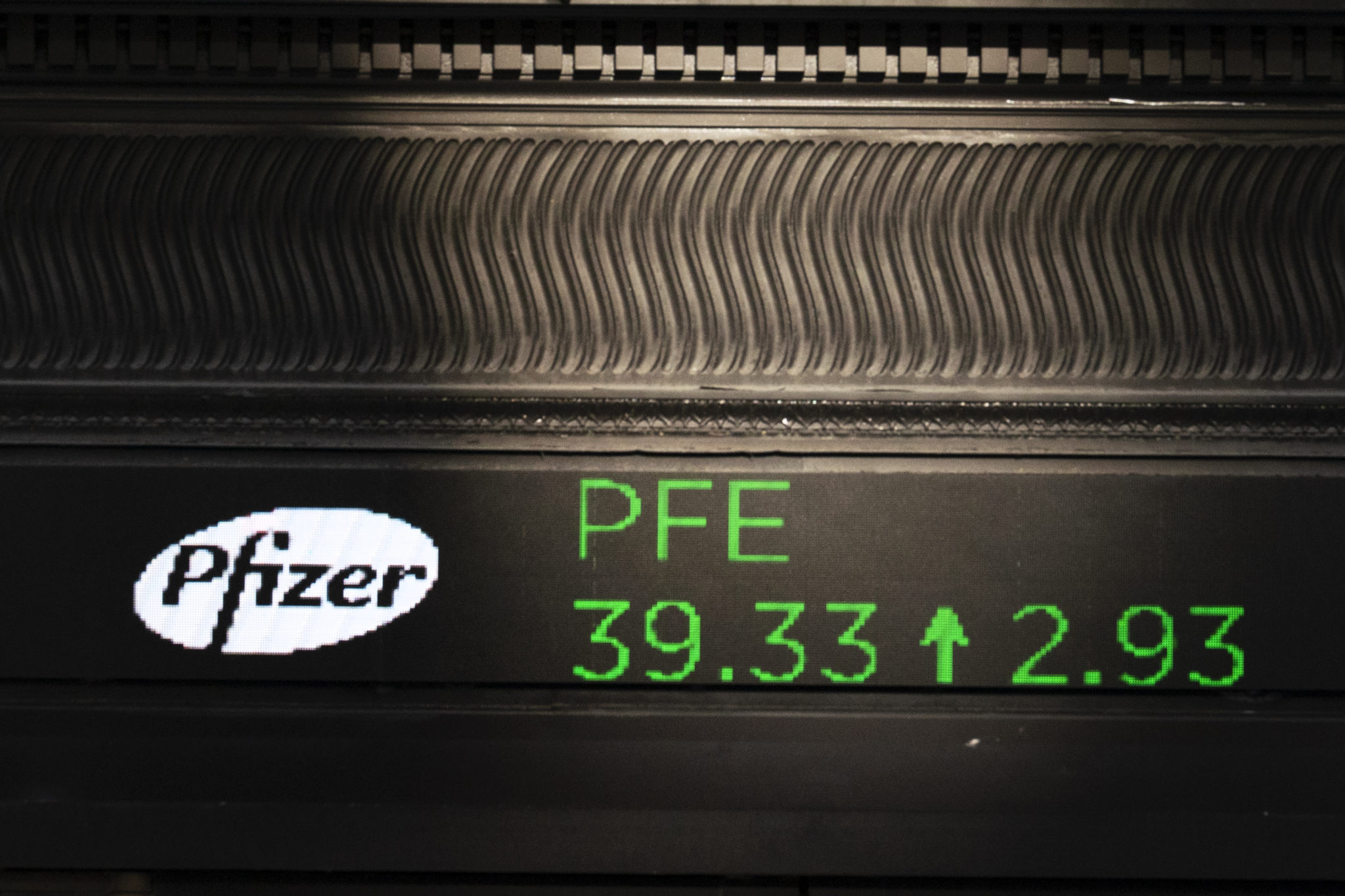 A stock ticker with Pfizer stock information is shown at the New York Stock Exchange in the US. Picture by: Mark Lennihan/AP/Press Association Images

"These numbers are low".

The two doses are given 21 days apart, but do not contain the coronavirus itself.

"So you're not giving the virus, you're not actually giving a part of the virus to these people.

"You're just giving them almost a photographic image of what the virus will look like if you were to encounter it in the future, and your body is then supposed to make immune cells against this.

"So it's almost as if you can imagine security guards standing at airport security with photographs of people on the 'Most Wanted', list and then they don't get past".

On the next steps, Dr Dungan said safety will be an issue.

"We don't even have two months of full safety data for this.

"So this is baby steps in this trial, I think".

But she explained the US FDA needs to see two months of safety data for emergency approval.

"You need to show two months of good data from the end of the last person being vaccinated to prove that it is safe and there are no big, adverse outcomes.

"Two months in the grand scheme of things - it's very good for a lot of reactions... but there are long-term problems that can occur from taking certain medications.

"Although they're very unlikely, is is possible.

"And one of the most important things with any coronavirus vaccine is that it is safe.

"You do not want to put a vaccine out there that is going to make people sick.

"So it's a tightrope that they're walking.

"But the piece of string for the FDA they're saying is two months, so that would come somewhere in the third week of November they will apply for full FDA approval for this vaccine".

Main image: A nurse prepares to inject flu vaccine Jacopo Leoni at the Museum of science and technology in Milan, Italy in this file photo. Picture by: Luca Bruno/AP/Press Association Images

Luke O'Neill: Pfizer's vaccine can now be kept in a regular freezer