Ruth Morrissey's solicitor has said COVID-19 restrictions meant she could not have a party to cel...

Ruth Morrissey's solicitor has said COVID-19 restrictions meant she could not have a party to celebrate her daughter's holy communion, at what would have been her last family event.

Ms Morrissey, who had cervical cancer, died on Sunday with her husband by her side.

She was awarded €2.1m by the High Court in 2019 over the misreading of her smear test results.

Her solicitor Cian O'Carroll told Pat Kenny: "Ruth has been very sick for quite a while now, and after the High Court trial within a week she was in the hospice.

"While that obviously doesn't mean that you're at the end of your life, it shows that things were very bad.

"There were a number of episodes between then and now where she was in a very bad place and she's had an awful time of it.

"It really has been all the worst complications and she has had just a really awful time.

"And then you imagine the effect that has on her family, her husband and her daughter being the closest obviously - but she's a young woman with parents and siblings and a lot of people who really loved her because she was a very endearing, lovable person.

"Stepping out of the Four Courts, Ruth had remained very private and quiet up to then.

"Originally, the case in fact had been granted that facility of anonymity by Mr Justice Kevin Cross."

"When it came to the point of the trial starting, she felt that something had to be done and that she had to show herself.

"And just the physical appearance of Ruth at that stage was dramatic because it was the image we often imagine as somebody who's going through chemotherapy and having a very difficult time. 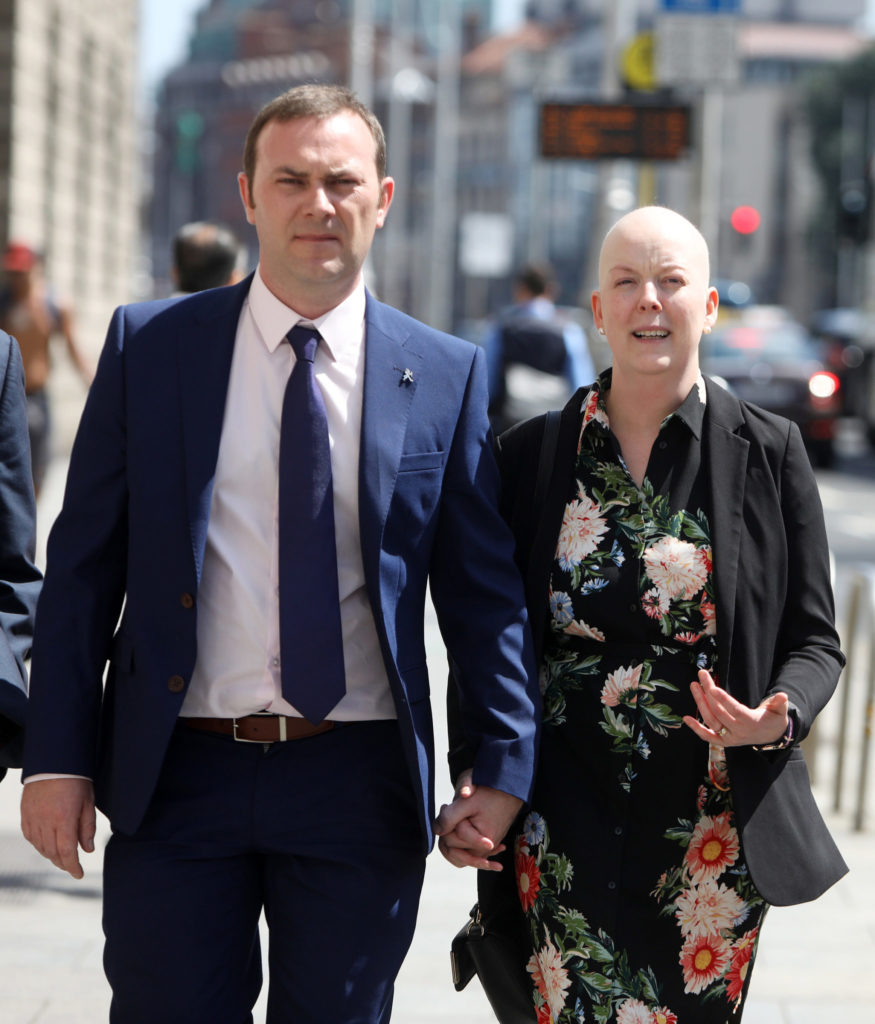 Ruth Morrissey and her husband Paul arriving at the High Court in Dublin in 2018. Picture by Leah Farrell/ RollingNews.ie

"As she could joke herself, she was bald as an egg, and she was obviously somebody who was very sick with cancer - and so she asked the court to lift that anonymity and then the case became Ruth Morrissey.

"She was seen, pictures of her, but she didn't speak because she was still private.

"And then at the end of that trial she did go out, and I spoke to her about that at the time, and she felt it was just about something she was willing to do for a very brief remark.

"But, as you said, it was about the well-being and the safety of others."

On fighting the case itself, Cian said: "She certainly ended up in the hospice for her first time very shortly after the trial.

"It had to take quite a lot out of her, and she did ask for that cup to pass, and she was really hoping then after the success in the High Court that the State - well, the laboratories appealed as well - I don't mean to put all the pressure on the State here.

"But I do feel that there is a different issue with the State and with the laboratories.

"But she really wanted that appeal not to happen and she was gutted when it did go ahead.

"It was another huge delay and it meant she was watching the clock running down on her life, she knew that.

"She was looking towards hopefully this spring for her daughter's first holy communion and she was planning something that would be akin to a large family wedding to mark that - because she knew that was going to be her last family occasion with her little daughter.

"And that, unfortunately, didn't happen because of COVID-19 restrictions - but she desperately hoped that the last six months maybe wouldn't be marred by an appeal - and yet, her case was last before the Supreme Court of Ireland last Wednesday."

"And I think where it didn't engage in the High Court on the key issue of what is the standard of care... the State never engaged with that.

"They were asked to give an opinion on absolute confidence and they said 'we're not commenting' and then they came out - having not commented on it - and made a big deal about it and then appealed the matter to the Supreme Court.

"And I think that is where I have a difficulty".

Mr O'Carroll said the HSE's declining to comment "I believe precluded them from then using that as a basis for appeal.

"There would still have been an appeal.... but the conduct of the State in that I think was misguided and wrong and unfair to her".

Asked about an apology  last year by then-Taoiseach Leo Varadkar to the women affected, he said: "That apology in October in the Dáil, that was primarily around the issue of non-disclosure.

"The State was still then contesting that it had any responsibility for errors in the laboratories  - they're still actually contesting that, even despite the Supreme Court judgement.

"But in October when that apology was made, Ruth Morrissey was fighting a Supreme Court appeal by the State - claiming that they had no responsibility.

"So I don't see how you can now say that that October 2019 apology had anything to do with Ruth Morrissey.

"It couldn't, cause if it did they couldn't have maintained their fight".

Main image: Ruth Morrissey addressing the media outside the High Court in Dublin in 2019, after the court ruled in her favour in her case against the HSE and two US laboratories. Picture by: Leah Farrell / RollingNews.ie