The CervicalCheck campaigner Ruth Morrissey has died at the age of 39. Ms Morrissey, who had cerv...

The CervicalCheck campaigner Ruth Morrissey has died at the age of 39.

Ms Morrissey, who had cervical cancer, passed away peacefully at Milford Hospice with her husband by her side.

She was awarded €2.1m by the High Court in 2019 over the misreading of her smear test results.

The Supreme Court was told last week that the Limerick woman and her husband Paul had been paid the full sum.

Mr Justice Kevin Cross said in his judgment last year that if her 2009 smear had been properly analysed and her 2012 slide was deemed inadequate, what probably would have followed meant she would never have contracted cancer and would not have less than two years to live.

'An enduring inspiration of strength and determination'

In a statement issued on behalf of Paul Morrissey by their solicitor Cian O'Carroll, Ms Morrissey was described as having "a sparkle to her smile, her wit and her intelligence".

"That sparkle made her wonderful company and her friendship was a gift she gave generously to anyone who knew her.

"Though just 39 years old, Ruth achieved so much in her life and chief among those accomplishments is the love she and Paul shared and the wonderful daughter they brought into this world and raised with love."

The State's appeal of the High Court ruling was described as "a terrible blow". 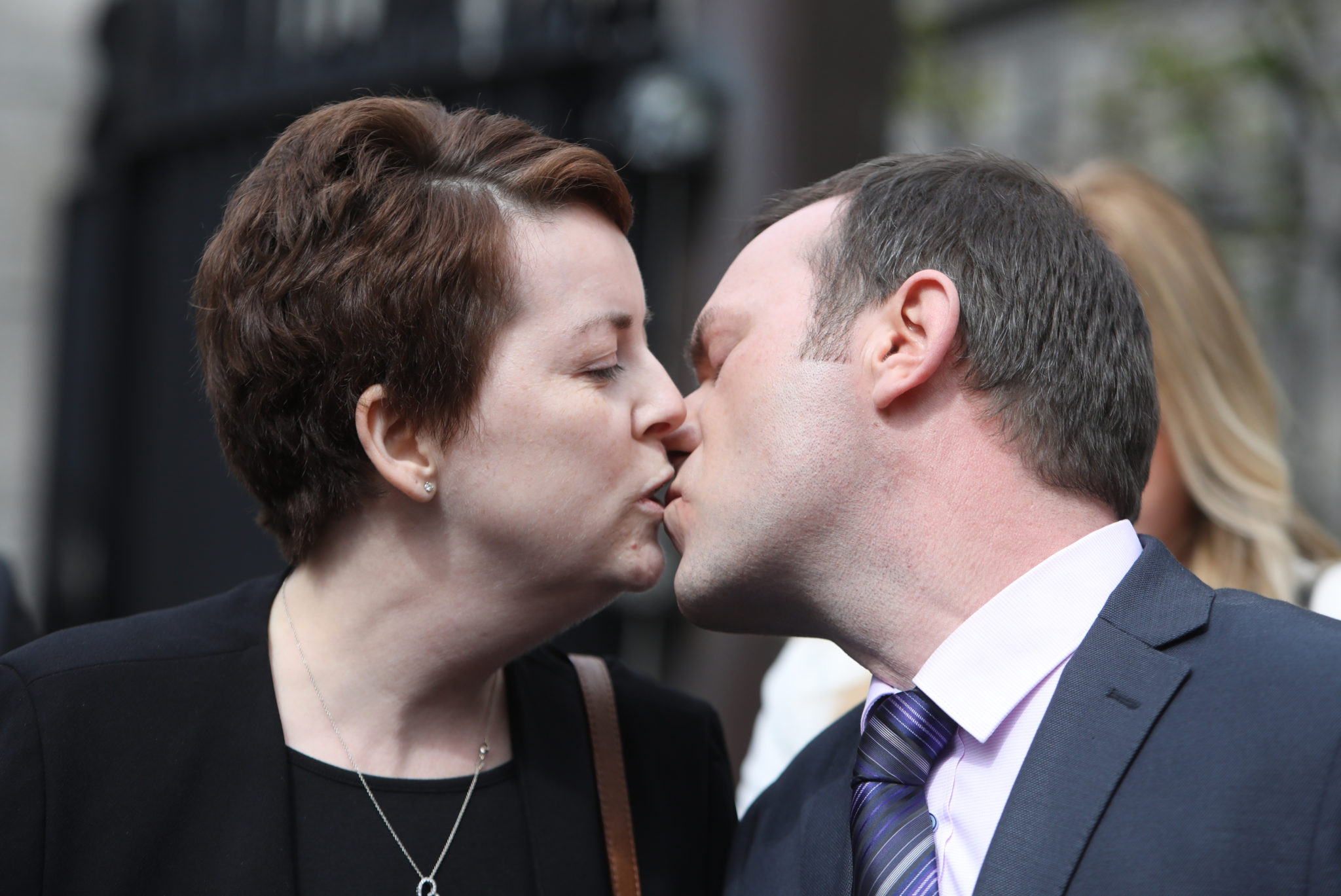 Ruth Morrissey kisses her husband Paul outside the High Court in Dublin in May 2019. Credit: Leah Farrell/RollingNews

The statement continued: "Despite the magnitude of the harm caused to her by avoidable errors, despite the broken promise of a Taoiseach who said no other woman would have to go to trial, despite using Ruth as a test case through the final years and months of her life, neither the HSE nor the State has ever apologised to her, and now it is too late.

"The Morrissey and Moloney families, in their grief, wish to thank all those who have given help, support and medical care to Ruth over these past few difficult years.

"Ruth’s life was a very happy one and none of the hardships of recent years robbed her of her good cheer and positive spirit.

"She fought fiercely to stay alive for the family she adored. The example she set stands as an enduring inspiration of strength and determination that should help many others through difficult times in the future."

Health and CervicalCheck campaigner Vicky Phelan said today: "Ruth was one of the strongest women I know, and also one of the most positive.

"I never once saw her without a smile on her face and I saw her when she was very ill.

"My thoughts today are with Ruth's husband, Paul and their beautiful daughter, Libby who Ruth adored."

My children are away for a few days at my parents. I am so glad they are not here. I don't have to try to put on a brave face and can just sit here with my feelings and grieve for Ruth and for the life that she didn't get to live, for the time she didn't get to spend with Libby

Writing on Twitter she said: "Rest in Peace RuthMorrissey a beautiful, gentle lady, your life has been cut short far too soon, you shouldered a great burden for many of us, 221plus, my sincere condolences to Paul & Libby and your family, May your gentle soul rest in peace."

Campaigner Stephen Teap, whose wife Irene died from cervical cancer in 2017, said on social media: "Struggling to find the words to display my sadness at hearing this news this morning, #ruthmorrissey was a kind and gentle soul who I was honoured to know, always checking up on me and my boys even in the middle of her own battles, this world is at a loss without her, may she now RIP."

Labour leader and party spokesperson on health Alan Kelly extended his condolences and said Ms Morrissey and her family "have shown so much bravery in the eyes of adversary since her cancer diagnosis".

He added: “Ruth’s fight for justice while enduring a devastating cancer diagnosis has not just been an inspiration for me but for so many people right across our island."

Main image: Ruth Morrissey addressing the media outside the High Court in Dublin after it ruled in her favour in her case against the HSE and two US laboratories. Credit: Leah Farrell/RollingNews.ie