US says coronavirus outbreak 'may kill 200,000' as measures extended

US President Donald Trump has said coronavirus deaths in the US are expected to peak in two weeks - as his top scientific adviser warned the outbreak could kill up to 200,000 Americans.

Mr Trump announced he was extending the 15-day period of social distancing in the country, which was due to expire on Monday, until April 30th.

In a briefing at the White House, Mr Trump said his remarks last week that he wanted the US economy running again by Easter were "aspirational".

"The modelling estimates that the peak in the death rate is likely to hit in two weeks," he said.

"The better you do, the faster this whole nightmare will end. Therefore we'll be extending our guidelines to April 30th to slow the spread."

The US has the most coronavirus cases in the world - with more than 136,000 suspected and confirmed infections, according to Johns Hopkins University, which is tracking the outbreak.

More than 2,400 people who have contracted COVID-19 have died in the US.

At least 1,026 deaths have been recorded in New York. 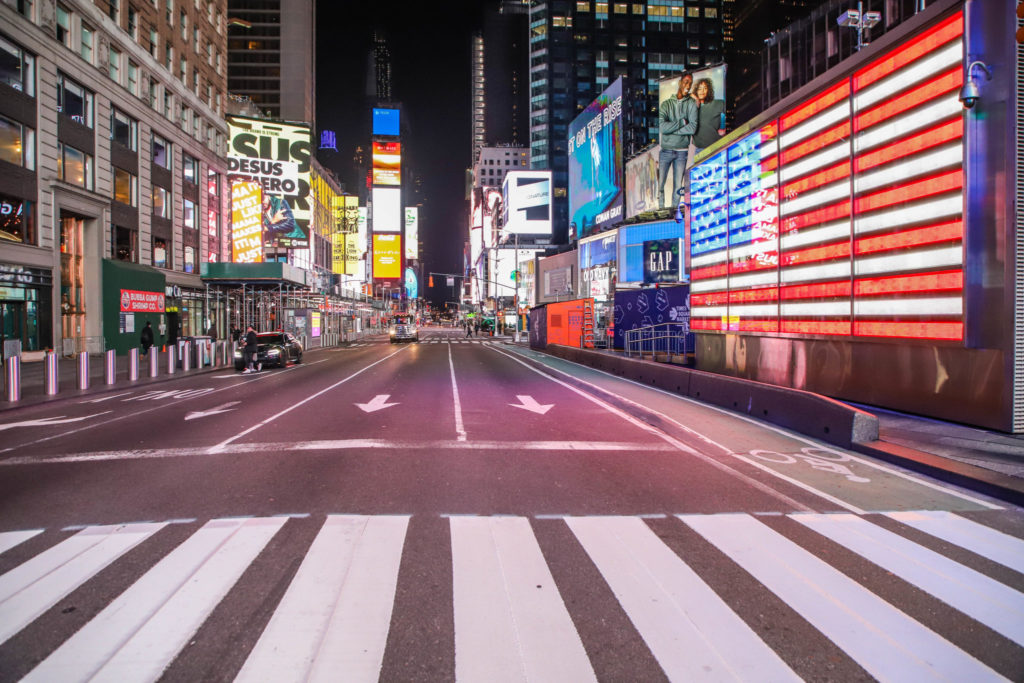 Times Square in New York on Thursday March 26th. With more than 82,000 cases, the United States has become the country with the most confirmed cases of COVID-19 in the world - surpassing Italy and China | Image: Vanessa Carvalho/Zuma Press/PA Images

The US government's guidelines recommend against large group gatherings and urge older people and anyone with existing health problems to stay at home.

People are urged to work at home when possible and avoid restaurants, bars, non-essential travel and shopping trips.

Dr Anthony Fauci, director of America's National Institute of Allergy and Infectious Diseases, has warned the COVID-19 outbreak could kill 100,000 to 200,000 Americans.

Speaking at the White House briefing on Sunday, Dr Fauci said the projection was "entirely conceivable" if not enough is done to mitigate the crisis.

Mr Trump said projection models had showed potentially 2.2 million people could have died had the US not put social distancing measures in place.

"It's a horrible number," Mr Trump said. "We all together have done a very good job."

The US says the #coronavirus 'may kill 200,000' people there, as Donald Trump extends restrictions to April 30th.https://t.co/2DqT36IO3F pic.twitter.com/r0eTLvSh1H

Mr Trump claimed that some hospitals and healthcare workers were "hoarding" ventilators which are in scarce supply across the US.

"We have to release those ventilators - especially hospitals that are never going to use them," he told reporters.

The president said he also wanted the governor and mayor of New York to check why "a hospital that's getting 10,000 masks goes to 300,000 masks during the same period", adding: "I think people should check that because there's something going on.

"I don't think it's hoarding, I think it's maybe worse than hoarding."

He added: "We're delivering millions and millions of different products and all we do is hear: 'Can you get some more?'"

Mr Trump said the US had 10,000 ventilators which are being held in a case of emergencies in different states.

The president - who has previously tested negative for coronavirus - also said he would be willing take the test again "if appropriate".

What will weddings look like under the latest COVID-19 restrictions?

Clothes to be 'quarantined' as browsers return to shops