Ireland's unemployment rate may not return to pre-COVID levels until 2024. Just over 1 million pe...

Ireland's unemployment rate may not return to pre-COVID levels until 2024.

Just over 1 million people, or 22.5% of the population, are now out of work, according to the Central Statistics Office.

The bank expects this to fall to 14.5% by the end of the year, if lockdown measures continue to be unwound on a phased basis.

Its Director of Economics and Statistics Mark Cassidy said it could be four years before unemployment returns to levels seen before the pandemic.

“Even by 2022, our forecast unemployment is around 7%, which is still around 2% higher than pre-COVID,” he said.

“We think it could be end 2023, possibly into 2024 before unemployment might return to pre-COVID levels.”

The predictions are included in the bank’s latest quarterly assessment, which sets out two projections for Ireland’s recovery – one based on the continued reopening of the economy and another based on the potential for a resurgence in the virus.

The “baseline” scenario predicts an initial rebound in the economy, followed by a gradual recovery. This would see economic output returning to pre-COVID levels by 2022; however, the bank notes that the level of activity will still be far lower than it would have been if the virus had not hit.

In the “severe” scenario, lockdown measures would return in some areas, making for a subdued economic recovery with a larger permanent loss of output.

This would leave the level of GDP in 2022 about 5% below its pre-crisis level. 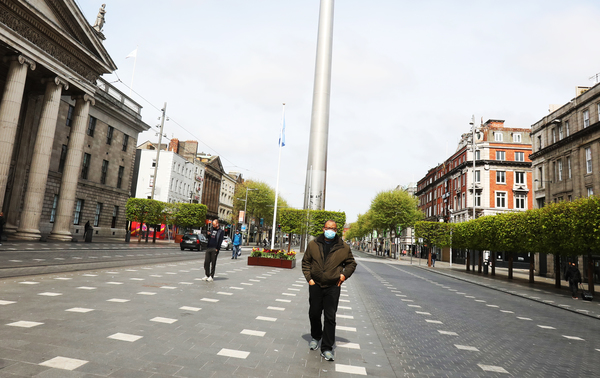 A member of the public wearing a mask on O'Connell Street in Dublin, 22-04-2020. Image: Leah Farrell/RollingNews

The assessment also highlights regional differences in the impact of lockdown, with workers in Donegal, Kerry, Louth and Carlow making the most use of the COVID-19 state supports.

It notes that the hardest-hit sectors have been those with a high dependence on physical interaction – such as accommodation, food services, retail and construction.

Mr Cassidy said the outbreak’s impact was hardest in areas that are reliant on tourism and hospitality – with city’s faring better.

“Already we see that some regions are more affected than others and those that more affected, that have the highest share of the population on income supports, are those that are most heavily involved in the most affected sectors such as accommodation and food services and parts of the retail sector,” he said.

“Also, those in jobs or occupations that are less able to physically distance.

The report also warns that 30,000 fewer homes could be built over the next three years due to the crisis, with activity in the construction sector activity expected to decline by 25%.

Mr Cassidy says the pandemic has already had an impact on the housing supply.

“We think housing output this year could be around 16,000 units whereas previously we were forecasting around 26,000 units,” he said.

“Indeed, over the next three years we think output could be lower by around 30,000 units compared to what we were previously expecting.

“That will have a significant effect because there was already a serious shortage of housing in the country affecting many households and individuals.”

He said the path ahead will depend on the behaviour of the virus and our ability to respond to any resurgences.