Leaders in Northern Ireland have said they will not follow a new COVID-19 approach set out by Lon...

Leaders in Northern Ireland have said they will not follow a new COVID-19 approach set out by London.

People in the UK are now being told to "stay alert, control the virus, save lives" - a change from a previous mantra of "stay at home, protect the NHS, save lives".

This has been criticised by some for being unclear and confusing.

While the leaders of administrations in Scotland, Wales and Northern Ireland have already said they will not use this updated message - telling people to simply "stay at home" instead.

It comes as Irish people travelling by plane to the UK will not have to go into a 14-day quarantine when they arrive.

The British Prime Minister Boris Johnson has given people from Ireland and France an exemption to the self-isolating rules.

But according to reports, the Irish government will not make a return gesture for people arriving by air from the UK.

In a speech on Sunday, Mr Johnson said he was taking "the first careful steps" in easing the coronavirus lockdown.

In a pre-recorded address, he said the British government wants to "encourage people to take more and even unlimited amounts of outdoor exercise" - provided they stick to social distancing guidelines and stay two metres apart.

And in a bid to kickstart the economy, he said anyone who cannot work from home - such as those in construction and manufacturing - should be "actively encouraged" to go to work from Monday.

He stressed that now "is not the time" to end the lockdown altogether - and said his government is simply taking "the first careful steps" to ease certain measures. 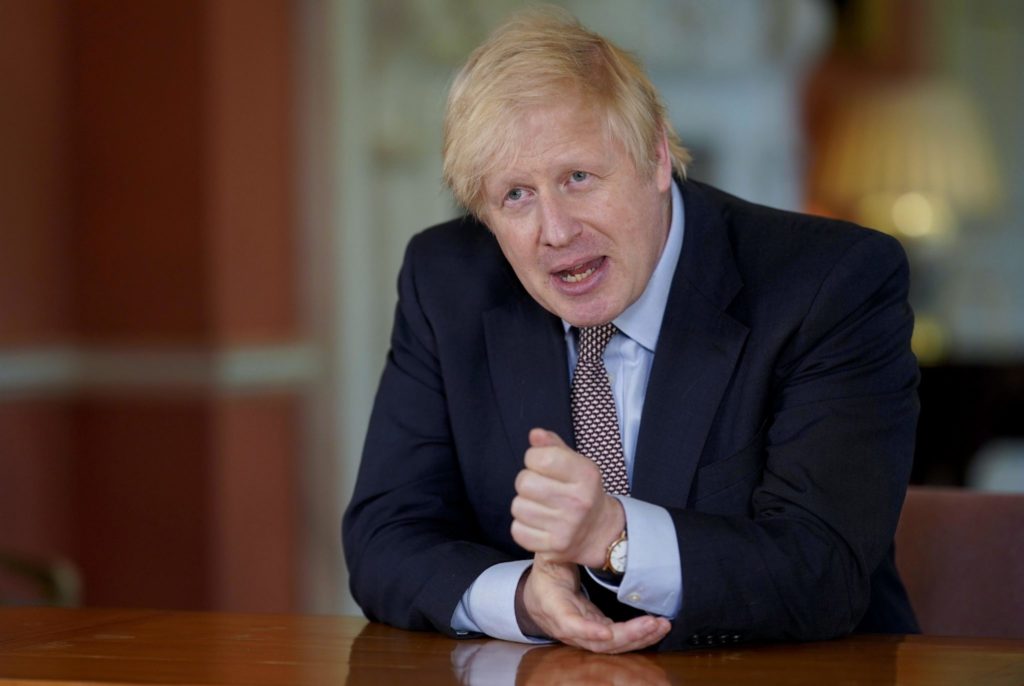 UK Prime Minister Boris Johnson speaks during the filming of an address regarding developments on coronavirus at 10 Downing Street. Picture by: Andrew Parsons/DPA/PA Images

Explaining how things will change from Wednesday, he added: "You can sit in the sun in your local park, you can drive to other destinations, you can even play sports but only with members of your own household."

However, Mr Johnson warned that fines are going to be increased for the "small minority" who fail to obey social distancing rules.

And he said that the impact of all of these changes is going to be "closely monitored" at a local, regional and national level, adding: "If there are outbreaks, if there are problems, we will not hesitate to put on the brakes."

He also said he believes children could gradually return to primary school from June 1st at the earliest.

While at least some of the hospitality industry and other public places could begin to reopen in July at the earliest "if and only if the numbers support it".

He said: "Throughout this period of the next two months we will be driven not by mere hope or economic necessity.
"We are going to be driven by the science, the data and public health."

Although people there can return to their workplaces if necessary, he said safety should be a priority when they are commuting.

"You should avoid public transport if at all possible, because we must and will maintain social distancing, and capacity will therefore be limited," he added.

He also unveiled a five-stage coronavirus warning system to guide the UK government's response as it begins easing the lockdown.

It will detect increases in COVID-19 infection rates and judge how strict lockdown measures and social distancing rules should be locally.

"This statement raises more questions than it answers, and we see the prospect of England, Scotland, Wales and Northern Ireland pulling in different directions.

"The prime minister appears to be effectively telling millions of people to go back to work without a clear plan for safety or clear guidance as to how to get there without using public transport.

"What the country wanted tonight was clarity and consensus, but we haven't got either of those."

The coronavirus has so far killed at least 31,855 people across the UK.

Mr Johnson's speech comes after British ministers were accused of sending "mixed messages" and creating false hope that a significant easing of the restrictions was on the cards.

The Northern Ireland parliament buildings at Stormont in Belfast are seen in February 2004. Picture by: Paul Faith/PA Archive/PA Images