Gardaí have insisted they responded immediately after they were alerted to the robbery of two AT...

Gardaí have insisted they responded immediately after they were alerted to the robbery of two ATM machines in County Meath overnight.

A stolen digger was used to rip the machines from Bank of Ireland and AIB on the main street in Kells in the early hours of this morning.

Homemade spikes were laid outside Kells Garda Station and a tractor and trailer were used to block access to the banks.

However, Gardaí said they acted immediately when they were alerted at 4:20am – and have insisted the spikes did not affect their response time.

“To stop further thefts like this the Gardaí will do everything they can,” said Superintendent Dermot O’Connor.

“The Gardaí in this case made an immediate response. Unfortunately those involved had left the scene.

“It is the subject of a full investigation; an incident room has been established and we are appealing to the public to assist us and provide us with any support, knowledge or information they have in order to bring those involved to justice.”

Locals in Kells told Newstalk they are disappointed with the speed of the Garda response.

“I would say the [Garda station] is about a brisk five minute walk away,” one said.

“It is just that the place is not manned properly – there is not enough people in it.”

“I have often walked that way,” said another. “They could have run down from the station.”

“Never mind the cars, they could have run down.”

In total four ATMS were robbed on both sides of the border last night – with two more stolen in County Antrim.

Meanwhile, thieves attempted to steal another machine in Craigavon in County Armagh.

It brings to 15 the number stolen on both sides of the border in recent months.

A JCB Fastrac tractor, trailer and an excavator were left at the scene in Kells.

Both the JCB tractor and the excavator were stolen in the Louth and Meath areas overnight.

Gardaí have called on anyone owns or uses heavy plant machinery to “take every possible step to secure and immobilise your vehicles.”

“Please ensure they are stored securely and not left in an area that is easily accessible overnight.

“If criminal groups cannot steal diggers and other similar machinery, they cannot tear out ATMs.

“This will also mean that these expensive pieces of machinery are not destroyed or burnt out after they are stolen.”

Investigators also appealed to the public to report any unusual movement of plant machinery, commercial jeeps or pickup trucks during night hours. 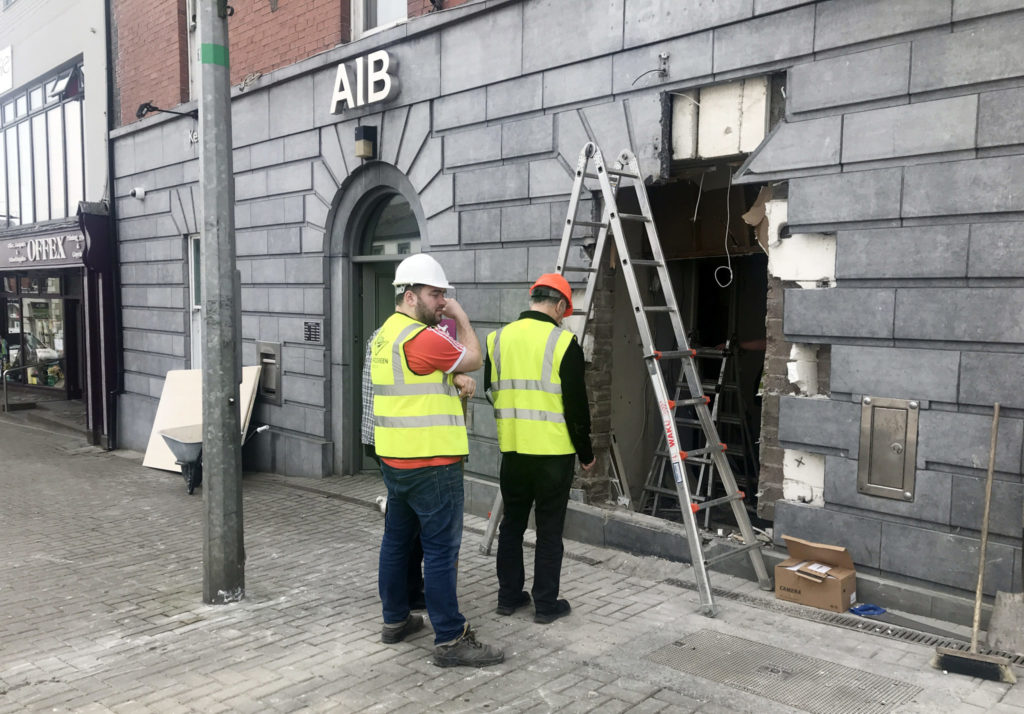 The scene in Kells County Meath, after two banks were hit in the latest series of ATM robberies, 19-04-2019. Image: Eamonn Farrell/Rollingnews

A "significant amount of damage" was caused to both premises, and the scene is preserved pending a technical examination.

Gardaí are appealing to any person in Kells on Friday morning between 3.30am and 4.20am and who saw anything unusual to make contact.

They are also appealing to any person who saw heavy machinery being moved or transported between Ardee and Kells, the N52 or adjoining roads in the early hours of Friday morning to contact Gardaí, and any person who may have been driving in that area and who has dashcam footage. 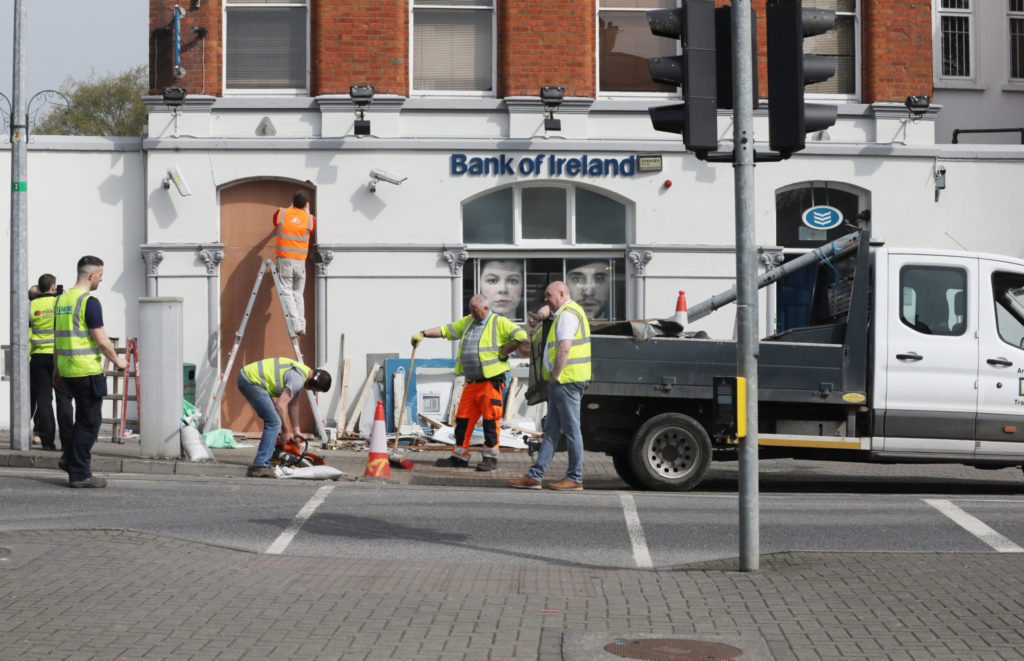 Superintendent Dermot O'Conner said: "This crime was an organised planned attack on the community of Kells.

"This crime is not a victimless crime and will have a significant impact on the community of Kells and the local area over this Easter bank holiday weekend.

"I appeal to the local and wider community to support An Garda Síochána and to provide any information to bring these criminals to justice".

In Co Antrim, thieves targeted a Tesco store in the Crumlin area - which housed two machines.

Both of these were stolen.

The thieves used a stolen digger, tractor and a trailer.

The PSNI, meanwhile, has appealed to the public to report any suspicious activity over the bank holiday weekend.

Detective Chief Superintendent Darren Evans said: "As the bank holiday weekend approaches and some construction work comes to a halt, I want to reiterate our appeal to anyone who owns or uses heavy plant machinery - please take every possible step to secure and immobilise your machinery.

"If criminals cannot steal diggers and other similar machinery, they cannot tear out ATMs.

"This will also mean that these expensive pieces of machinery are not destroyed or burnt out."

It is also asking people to report anything suspicious, including any unusual activity, people or vehicles loitering in areas close to ATMs.

🎬 WATCH: With 14 ATM thefts since December, reporter @BarryWhyte85 gives us an overview of what has gone on over the past few months. pic.twitter.com/OoPvm4PB0O

Bank accounts in Ireland: Here's what's on offer if you're making the switch