Trump doubles down on threat to target Iranian cultural sites

The US President has warned Iran that it would face “major retaliation” if it seeks revenge f...

Trump doubles down on threat to target Iranian cultural sites

The US President has warned Iran that it would face “major retaliation” if it seeks revenge for the killing of one of its top generals in a US drone strike.

President Donald Trump sanctioned the airstrike that killed Major General Qassem Soleimani and a number of Iraqi leaders in Baghdad on Friday.

Speaking on board Air Force One last night President Trump doubled down on his threat to target 52 sites in Iran if there was a response – some of which, he said, are important to Iranian culture.

Targeting an area due to its cultural significance would constitute a war crime.

He also threatened Iraq with “sanctions like they have never seen before” if US troops are forced to leave the country. 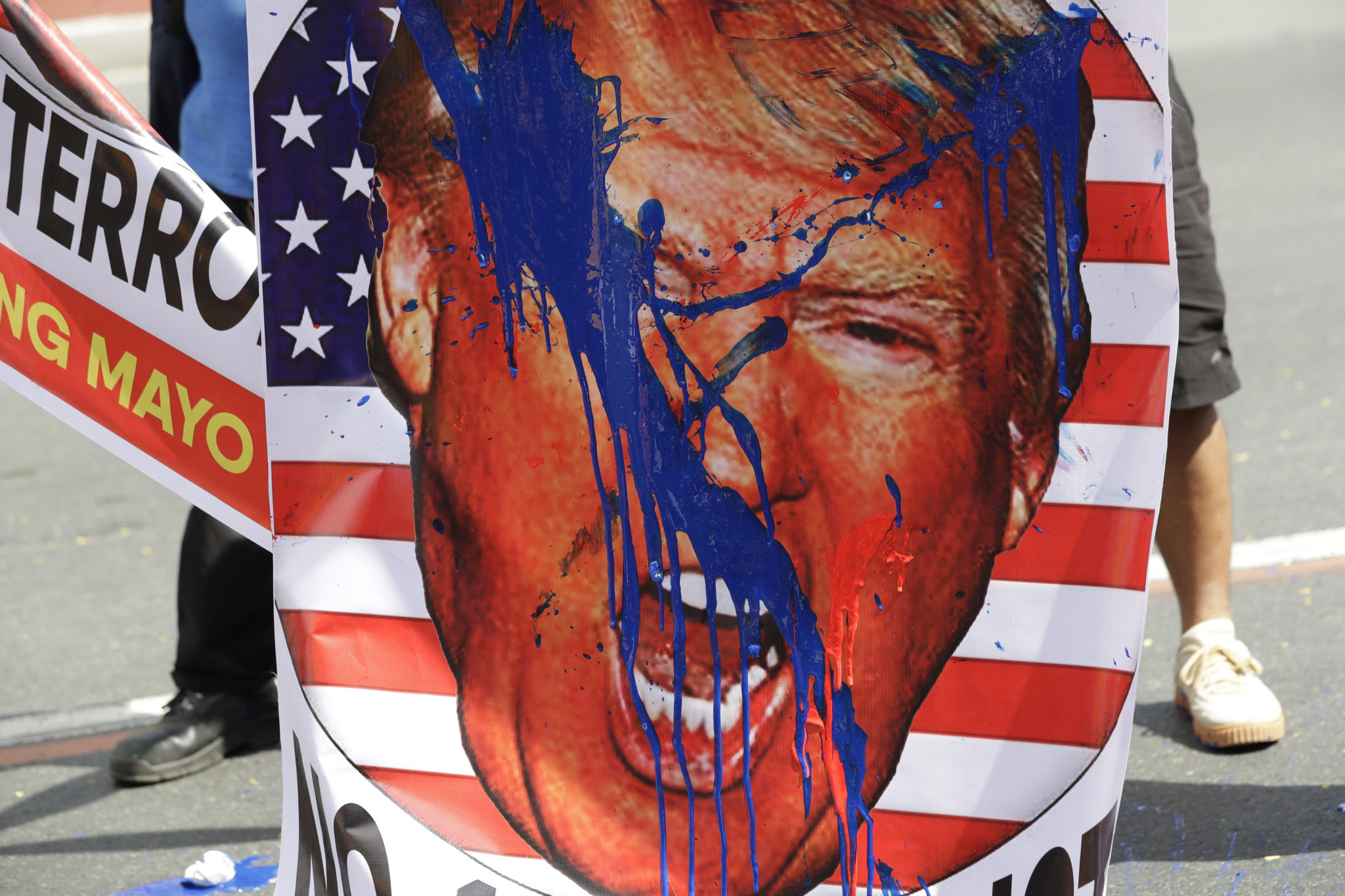 An image of US President Donald Trump is splashed with paint by protesters as they hold a rally opposing the US drone strike, 06-06-2020. Image: Aaron Favila/AP/Press Association Images

Yesterday, Iraq’s foreign ministry denounced the airstrikes as a "blatant" violation of sovereignty and a breach of the agreement between Iraq and the US-led coalition.

The country’s parliament passed a non-binding resolution asking the government to end the presence of foreign troops in the country and ensure they do not use its land, air and waters for any reason.

President Trump said such a move would prompt the US to level sanctions on Iraq that “make Iranian sanctions look somewhat tame.” 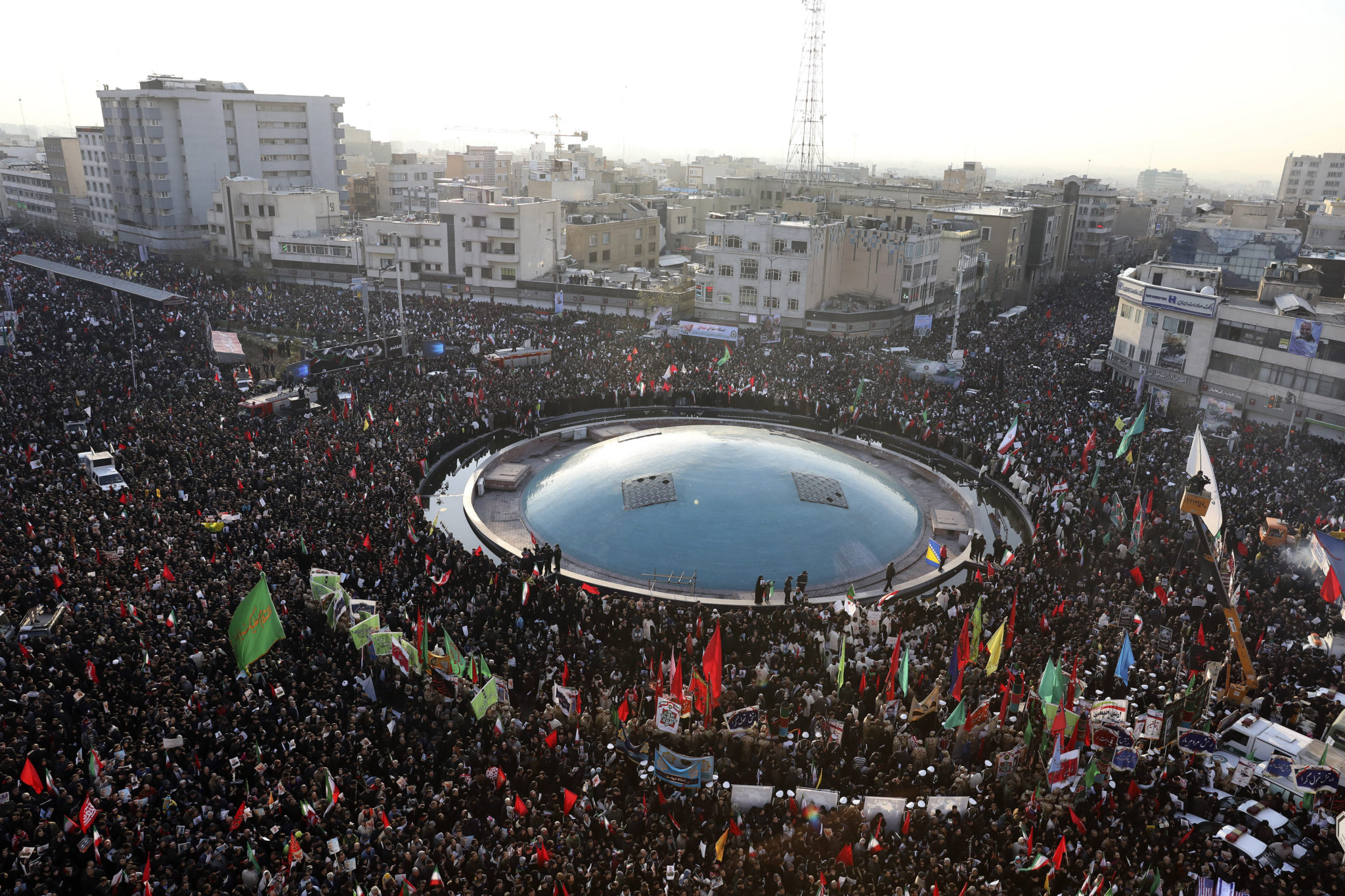 Mourners attend a funeral ceremony for Iranian General Qassem Soleimani and his comrades, who were killed in Iraq in a US drone strike on Friday, 06-01-2020. Image: AP Photo/Ebrahim Noroozi

The attack has prompted Iran to abandon the 2015 nuclear deal – a move which could bring it closer to building an atomic bomb.

Meanwhile, the French President, German Chancellor and British Prime Minister have released a joint statement calling for an "urgent easing" of tensions in the Middle East.

They said there was now "an urgent need for de-escalation".

"We call on all parties to exercise utmost restraint and responsibility. The current cycle of violence in Iraq must be stopped," the joint statement said.

"We specifically call on Iran to refrain from further violent action or proliferation, and urge Iran to reverse all measures inconsistent with the JCPOA (the Iran nuclear deal)."

It added: "We stand ready to continue our engagement with all sides in order to contribute to defuse tensions and restore stability to the region."

President Trump spoke to UK Prime Minister Boris Johnson by phone on Sunday, with the White House saying the two leaders “reaffirmed the close alliance between the two countries.”