Thousands of people attended Trans and Intersex Pride in Dublin amid concern that there is growin...

Thousands of people attended Trans and Intersex Pride in Dublin amid concern that there is growing “backlash” against the community and its rights.

Kicking off at the Garden of Remembrance, Dublin was awash with the pink and blue of the trans pride flag and hundreds of hand painted signs demanded equality, inclusion and healthcare.

“So many people don’t understand how vilified and oppressed the trans community has been for decades,” a spokeswoman for Amnesty International told Newstalk.

“And in fact right throughout the world today, a lot of them feel that they have to lead invisible lives and in fact there’s been quite a growing backlash against trans rights - as if trans people don’t exist or are somehow some sort of danger.”

Perhaps more than any other year, trans rights has been subjected to media scrutiny and debate. Many of the community have found that experience exhausting - and in some cases terrifying:

“We want to end the culture of transphobia and homophobia - especially within the media - that I think emboldens people to be violent against trans people and other members of the LGBTQ+ community.” 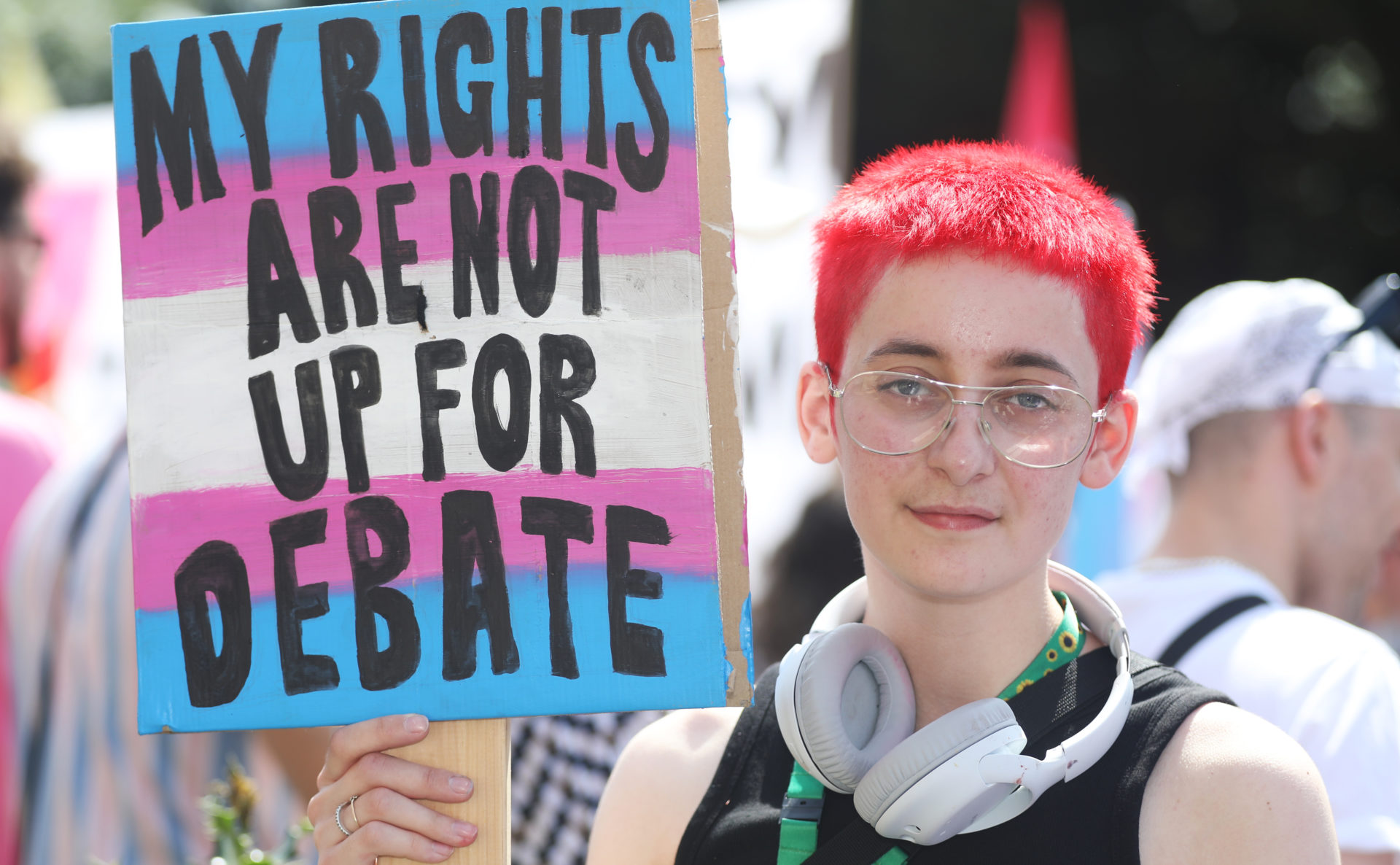 16/07/2022 Sabrie Reid from Dublin marches at the third Trans Pride which was taken place from the Garden of Remembrance to Merrion Square in Dublin. Photo Leah Farrell/Rollingnews

Access to healthcare was another concern by attendees; public waiting lists for gender affirming healthcare are notoriously long and many trans people resort to crowdfunding in order to go private.

“For example, waiting seven or 10 years to even start medical treatment. So if you bring your papers to the doctor, say today, and decided, ‘I found out I’m trans, I want to start my transition!’ - seven years waiting!

Teni is delighted to be here at @DubTrans with so many trans people and allies. The trans community needs better healthcare. We need to end transphobia and see trans inclusion in Irish society. #TransAndIntersexPrideDublin pic.twitter.com/8kAvc0GELl

Absent from the event were Taoiseach Micheál Martin and Tánaiste Leo Varadkar - both of whom marched in last month’s LGBT Pride parade. However, both political leaders have made clear that their support for LGBT rights was inclusive of all sections of the rainbow community.

An Tánaiste has previously made spoken of his distaste for what he described as Boris Johnson, “having a bit of a go at trans people, maybe hoping that will curry favour in certain sections, which is a bit sad.”

While An Taoiseach has said he wants Ireland to avoid the “toxic” debate Britain is having about trans rights:

“First of all, acceptance is the key for trans persons and I think we need a debate that creates a space for understanding and from an informed perspective, and sometimes we don’t get that in a highly charged forum.”

Mr Martin has also previously backed giving 16 and 17-year-olds the right to change their legal gender if they wish to do so.

Main image: People march at the third Trans Pride which was taken place from the Garden of Remembrance to Merrion Square in Dublin. Picture by: Leah Farrell/Rollingnews