Third patient tests positive for coronavirus in the UK

A third person in the UK has tested positive for coronavirus, the Department of Health there has ...

Third patient tests positive for coronavirus in the UK

A third person in the UK has tested positive for coronavirus, the Department of Health there has said.

The person did not contract it in Britain or China, but another Asian country the department would not specify.

The chief medical officer for England, Professor Chris Whitty, said: "A further patient has tested positive for coronavirus, bringing the total number of cases in the UK to three.

"The individual did not acquire this in the UK.

"The patient is being transferred to a specialist NHS centre, and we are using robust infection control measures to prevent any possible further spread of the virus."

Doctors in the UK are to be given new guidance on Thursday to tell patients who have travelled to specific countries, not just China, and who are feeling unwell to self-isolate.

Previously, this advice was only relevant to patients coming from China.

The first two cases in the UK of coronavirus, which originates from Wuhan, central China, were confirmed on January 31st.

Both people were staying at a hotel in York, England when they fell ill and one of them is a student at the University of York - while the other is not but is related to them. 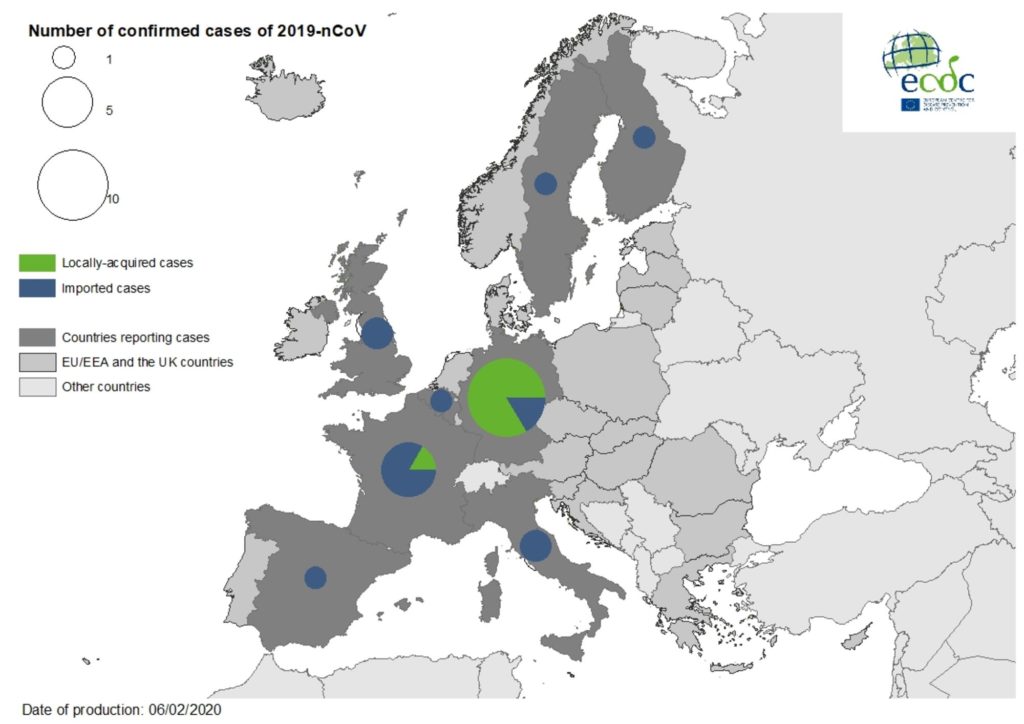 They are being treated at a specialist hospital unit.

Another case in Germany was also confirmed on Thursday, bringing the country's total to 13.

All cases, including two children, have centered on auto parts supplier Webasto, whose headquarters outside Munich were visited by a Chinese trainer.

The latest case is the wife of an employee who was previously diagnosed.

The death toll from mainland China jumped by 73 people on Thursday to 563 - mostly in Hubei province - with 28,018 confirmed infections inside the world's second largest economy.

Hong Kong has had 22 cases, including one death, while the Chinese autonomous region of Macau had had 10 cases.

Japan has had the most cases outside China, with 45, while Singapore, Thailand and South Korea follow behind with 28, 25 and 23 respectively.

Outside mainland China, 26 cases have been reported in the EU and the UK.

The World Health Organisation (WHO), which declared a global public health emergency on January 30th, said on Thursday it is too soon to say the outbreak is peaking, however Wednesday was the first day the overall number of cases in China dropped since it started in early January.

Ireland has no confirmed cases, but two Irish passengers are among thousands of people quarantined on a cruise ship off the coast of Japan over coronavirus fears.

The Department of Foreign Affairs here said it is aware of the case and is providing consular assistance.

The Diamond Princess has been quarantined off Yokohama.