An Tánaiste Leo Varadkar has given people food for thought, after he posted a picture of his fridge showing meals pre-prepared for the week ahead in plastic storage containers.

The 16 lunch boxes contained a range of meals made up of ingredients including sausages, eggs, ham and pancakes.

The image sparked light-hearted debate online, with some people questioning whether it was safe to store uncovered food in the fridge

The Food Safety Authority of Ireland (FSAI) has said it recommends the use of lids to prevent cross-contamination. 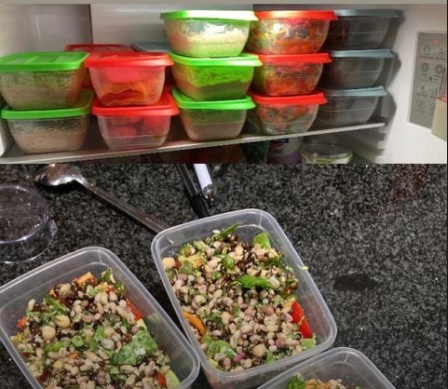 Mr Varadkar later posted an update, confirming that he and his partner Matt do in fact use lids when storing their pre-prepared food.

Chef Edward Hayden told Lunchtime Live he can see the merit in it.

"I'm just thinking the whole world must be in a state of chassis if we're starting to peruse the contents of the Tánaiste's fridge.

"I'm not a fan of batch cooking; my life doesn't necessarily endear itself to it - but that being said, I know so many people that are.

"I was thinking how gorgeous it is for someone to cook your dinner or your breakfast or your lunch for you - albeit whether that's cooked in advance or not.

"That being said the meals, from a culinary point of view, they might leave a lot to be desired.

"The food is looking shook, I have to say, to say the least," he said.

Odile Le Bolloch is an environmental scientist with the Environmental Protection Agency (EPA).

She said the idea behind batch cooking will help prevent food waste.

"I'm actually delighted to see people meal planning, because it's one of the best things you can do to reduce food waste.

"We do know that that's actually why people throw food away; they buy too much and then they don't eat it on time.

"Knowing what you're going to eat is a great way - not only do you save money, you save time - because you're not shopping for food you don't need - and you feel more organised.

"Batch cooking we're all for it; but I think what we'd be saying is make sure to incorporate food that you already have.

"You can batch cook soups, curries, stews, one-pot recipes; there's loads of stuff - and if you actually use your freezer as well as your fridge, you won't get that same level of fatigue," she added.