Arriving early on Friday, it will bring severe and potentially damaging winds

This story has been updated - for the latest version, click here

There is a warning of potential power cuts, and updated weather alerts, ahead of the arrival of Storm Eunice.

The storm is making its way towards Irish shores on Thursday and will cross the country overnight.

Arriving early on Friday, it will bring severe and potentially damaging winds.

There will be gusts of up to 130km/h, higher in exposed areas.

Some disruption is expected in these areas, along with a possibility of coastal flooding. 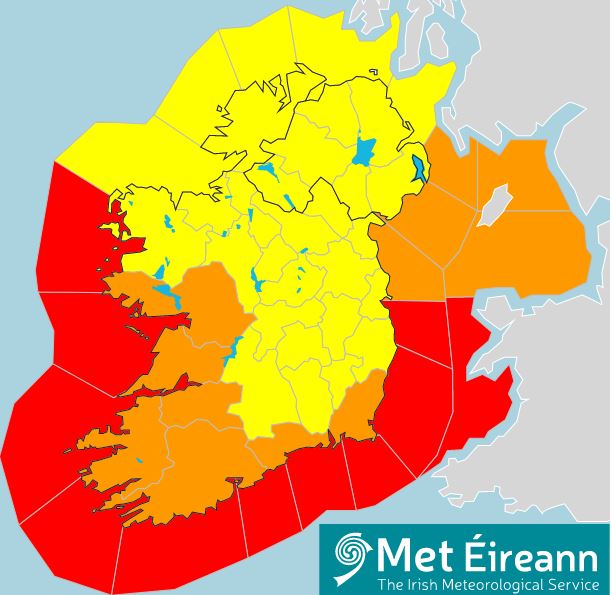 While a status yellow wind, rain and snow warning will be in place for the entire country.

This yellow alert will be in place from 1:00am until 3:00pm on Friday.

There are also red, yellow and orange gale and storm force warnings for all Irish coastal waters and the Irish Sea.

And a yellow wind and snow warning has been issued for Northern Ireland by the British Met Office.

It is the second storm in a number of days, after Storm Dudley passed over the north of the country on Wednesday.

Gerry Murphy, meteorologist at Met Éireann, told Newstalk Breakfast: "The south-west of the country will start to see the winds picking up early tonight.

"And then as we go through the night further rain, sleet and snow will spread across the country.

"The snow will be mainly over the northern half of the country - with the most significant falls of snow over Connacht and Ulster."

He says the wind will turn very strong overnight.

"More significantly, then, overall is the wind.

"The wind is going to get very strong overnight along the south and the west coast.

"Then those very strong winds will turn to a north-westerly direction, and it'll become extremely strong right across the country tomorrow morning".

He says there is a possibility that warnings will be upgraded in some counties.

But he says the storm will be 'short and sharp'.

"The storm itself will be gone by Friday afternoon - beyond that then it'll be windy and showery.

"But it'll be what we call normally windy, blustery and showery".