State of emergency declared in eastern Australia over deadly bushfires

The state of New South Wales in Australia has declared a state of emergency as deadly bushfires t...

State of emergency declared in eastern Australia over deadly bushfires

The state of New South Wales in Australia has declared a state of emergency as deadly bushfires there are expected to get much worse.

The state of emergency will last for seven days and allows the fire service to direct government agencies.

This could include ordering the shutdown of utilities such as gas and electricity, or taking possession of property to help the emergency response.

The fires have already killed three people and destroyed more than 150 homes in Australia's most populous state.

New South Wales State Emergency Services Minister David Elliott said residents were facing what "could be the most dangerous bushfire week this nation has ever seen".

NSW Rural Fire Service warned that Tuesday would bring "catastrophic fire danger" in the greater Sydney and the Hunter Valley areas, adding: "lives and homes will be at risk".

It is the first time the 'catastrophic' warning has been used since the fire danger ratings were introduced in 2009.

Rural Fire Service Commissioner Shane Fitzsimmons said it was "off the conventional scale".

The danger in most of the rest of the state will vary between severe and extreme.

Since Friday, 64 fires have ripped through more than 850,000 hectares of forests and farms in the state's northeast. At least 40 of the fires are out of control.

Temperatures are expected to hit the mid-30s in Sydney, with higher temperatures in more rural parts of the state, along with strong, dry winds. 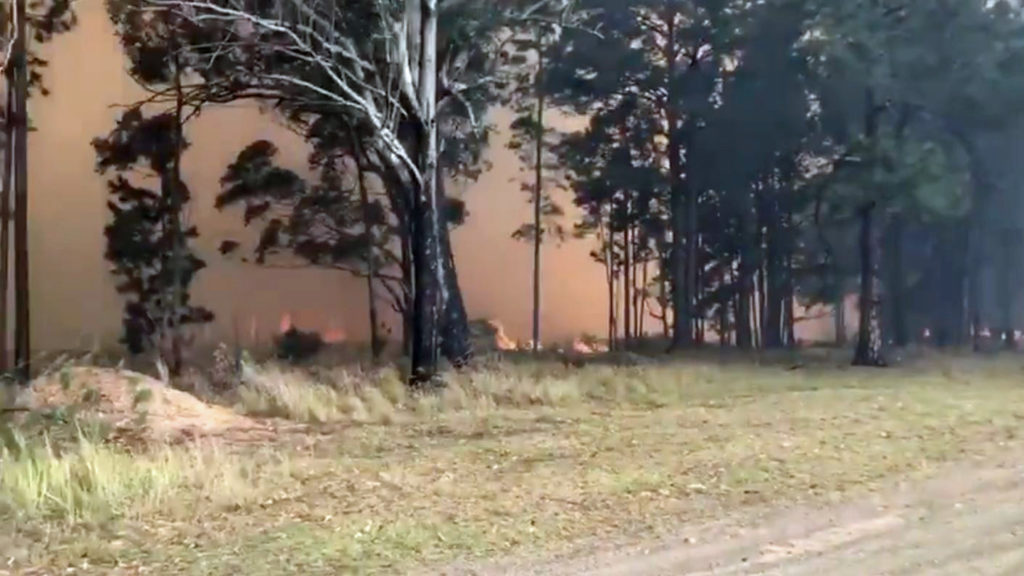 Residents have been warned that firefighters may not be able to help them on Tuesday.

Mr Fitzsimmons said: "Relocate while things are calm without the pressure or anxiety of fires bearing down the back door."

Fires can start up to 12 miles ahead of established blazes, he added, and even fireproofed homes would not survive catastrophic conditions. He said this would be "when lives are lost, where people die".

Firefighters and trucks are being sent from neighbouring Victoria to help their New South Wales colleagues.

There are also dozens of fires burning further north in the state of Queensland, with fire and emergency services acting commissioner Mike Wassing saying: "We're experiencing tinder box-like conditions across much of the state and all it takes is one spark to start a fire that may burn for days."

Bushfires are common in Australia during the summer - but this year's have come slightly earlier than usual, made worse by a drier and warmer than usual summer.

The worst fires killed 173 people and injured 414 in the state of Victoria on a day dubbed 'Black Saturday' in 2009.