The extent to which the Delta COVID-19 variant spreads in Ireland will depend on travel and vacci...

The extent to which the Delta COVID-19 variant spreads in Ireland will depend on travel and vaccinating people with two doses of the vaccine.

That is according to Kingston Mills, Professor of Experimental Immunology at Trinity College Dublin, who believes it will be "very difficult to stop".

There have been 188 cases of the strain in Ireland so far, but according to NPHET, the pandemic is still shrinking.

It has been reported today that a vaccine booster campaign against coronavirus is being planned for the winter.

The paper also reports that NIAC will use available immunity data to decide when the revaccination campaign will begin.

It is believed most mass vaccination centres will begin to close in the autumn, and the rollout will move to pharmacies and GPs.

Speaking to Stephen Murphy on Newstalk Breakfast Weekends, Professor Mills said the good news is that the vaccines are working in Ireland and internationally.

"That's all against the Alpha variant, which is the dominant variant that's now here in Ireland.

"But what's happening in the UK, there have been 75,000 cases of the Delta variant and that accounts for 90% of all their cases.

"That compares with the couple of hundred we know of in Ireland.

"For example, in the US they have a small number, I think around 2,000. 700 in Germany, 300 in Spain, 100 in Denmark, so the UK is standing out as being the country in Europe and the western world that has the dominant number of the Delta variant.

Professor Mills said statistics from England showed that over 2,000 people who had received at least one dose of the vaccine ended up getting the Delta variant.

"That means a significant number of people who are vaccinated are getting the disease and some are ending up in hospital," he said.

"That's the worrying thing for Ireland, we're using a mixture of the Pfizer, Moderna and AstraZeneca vaccines.

"The Pfizer and Moderna are giving very good protection but that's not the same for the AstraZeneca vaccine, unfortunately, it's just not quite as good as the other two when it comes to dealing with the Delta variant." 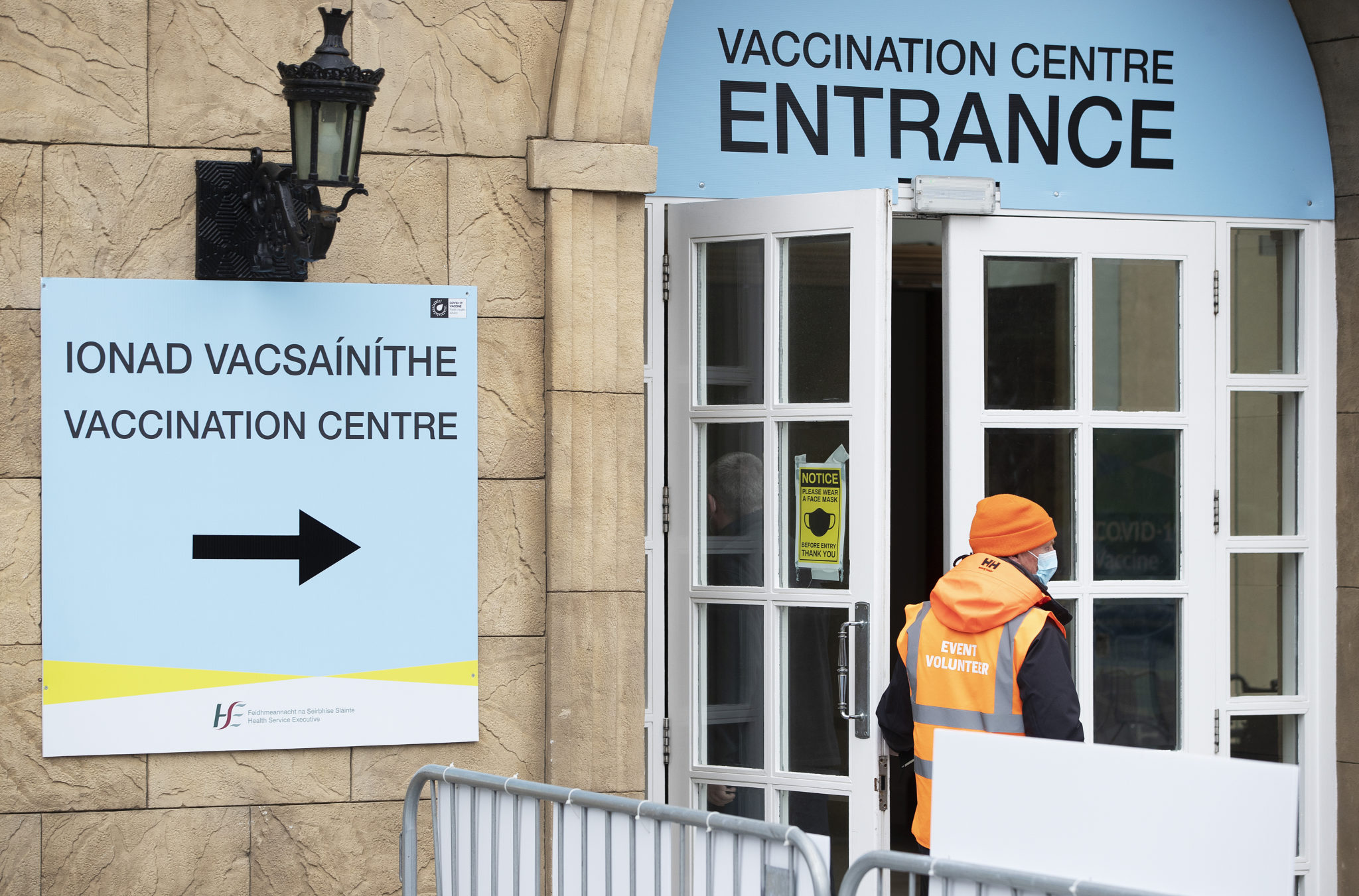 A view of the Citywest COVID-19 vaccination centre in Dublin. Photo: PA

Vaccinating people fully with two doses of the inoculation is "imperative", he added.

It comes as the vaccination portal opened today for those aged 35 to 39, beginning with 39-year-olds on Sunday, 38-year-olds on Monday, and so on.

"60% of adults have had one vaccination and 30% have had two, so we still have 70% of the population to give two doses to," Professor Mills stated.

"Still a good bit to go and the predictions are it will be the end of September before all adults are vaccinated and then they'll have to start with children, assuming the EMA approve it."

He said how the situation with the Delta variant proceeds in Ireland will also depend on international travel and the movement of people across the Irish border.

"Clearly it was not possible to contain it in the UK, what happened there were 50,000 travellers from India came in before they really put the right restrictions on travel from India and that let it spread in parts of northern England initially and then spread throughout the entire country," he explained.

"It's going to be very difficult to stop it here, to be honest."

NIAC: COVID-19 vaccines can be given with seasonal flu jab

Booster vaccine to open to over-40s ahead of schedule