The school where murderer Alan Hawe taught has said it was not aware of any inappropriate activit...

The school where murderer Alan Hawe taught has said it was not aware of any inappropriate activity by him on school grounds.

Jacqueline said: "There were bits and pieces of information and as you know we went through and inquest and the law for the inquest is very limited so we only find out where, when, how it happened and who it happened to but we never found out the why and we were advised that that probably would never happen at the inquest. 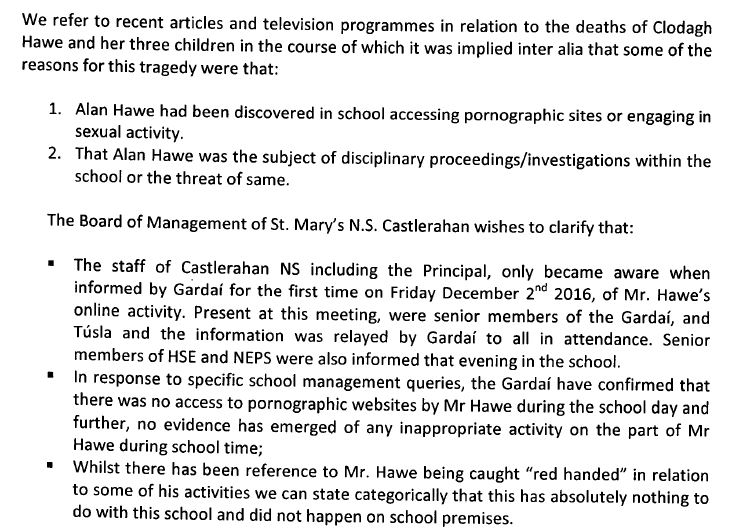 Part of the statement from St Mary's National School

But solicitors acting on behalf of the board of management of St Mary's National School, Castlerahan have released a statement.

It said: "Gardaí have confirmed that there was no access to pornographic websites by Mr Hawe during the school day and further, no evidence has emerged of any inappropriate activity on the part of Mr Hawe during school time".

"Whilst there has been a reference to Mr Hawe being caught 'red handed' in relation to some of his activities we can state categorically that this has absolutely nothing to do with this school and did not happen on school premises".

It added: "At no stage was there any disciplinary process or any other investigation instigated or threatened by the school in respect of Mr Hawe".

The board claimed some reports have damaged the reputation of school personnel, who are easily identifiable in a small rural community.

The letter also said their privacy had been compromised.

Main image: Gardaí and hearses at the Hawe family home in Co Cavan in 2016 | File photo