Some 12% of COVID-19 tests taken in Co Louth are coming back positive - the highest in the countr...

Some 12% of COVID-19 tests taken in Co Louth are coming back positive - the highest in the country.

While the test centre with the highest swab positivity rate is Buncrana in Co Donegal.

Some 28% of people who booked a test in Buncrana came back positive, the highest figure for a test centre in the country.

Dr Denis McCauley is a Donegal GP and head of the IMO's GP committee. He says he has never seen figures like this.

"It is jaw-droppingly high - I have never seen such a high positivity rate in any series before this.

"I think it just means that every fourth person who has, probably, mild symptoms who goes into the swab centre is actually coming back positive.

"Positivity rates, remember, could be 2.8% nationally - we get very excited when they're about 9 or 10%.

The second highest swab positivity rate by centre for those who booked a test is Tallaght Stadium in Dublin at 23%.

This is followed by Castlesaunderson in Co Cavan at 18%, then Ardee in Co Louth and South Douglas in Cork - which both have a rate of 14%. 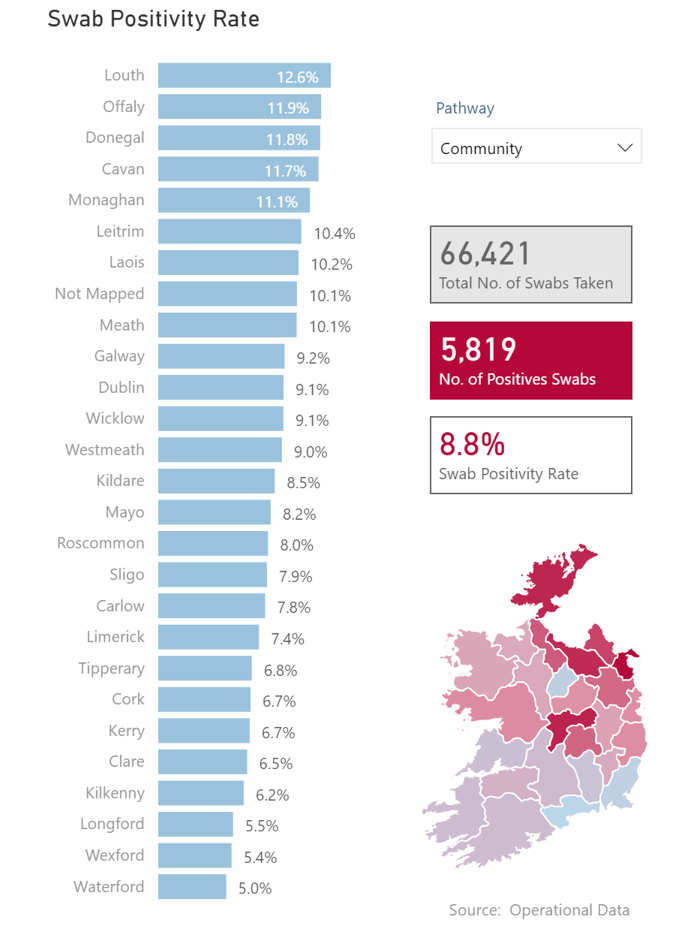 Dr McCauley is urging people to keep their guard up.

"if you're going indoors, and there's somebody in that grouping that has not been vaccinated, you mjust wear a mask.

"Because it is in these situations that the spread is particularly easy".

The lowest swab positivity rates are currently being recorded in Waterford (5%), Wexford (5.4%) and Longford (5.5%).