The organisation representing retailers across the country has said it expects 200,000 people to ...

The organisation representing retailers across the country has said it expects 200,000 people to be out of work by the end of the week.

David Fitzsimons, the chief executive Retail Excellence, said this figure would be in addition to the 140,000 people who have already lost their jobs.

The potential losses of 340,000 jobs would be as a result of measures introduced to help reduce the spread of COVID-19.

The news comes as it was announced that the Minister for Finance Paschal Donohoe will meet banking representatives tomorrow to discuss the industry's response to the coronavirus pandemic.

Mr Donohoe is also expected to clarify the situation on mortgages later this week after the Taoiseach said thousands of people who may not be able to make payments should be given a break during the crisis.

It follows the announcement on Sunday that all pubs and bars have been requested by the government to close until at least March 29th.

However, as it stands, cafés and restaurants are permitted to remain open once they implement social distancing.

Retail Excellence, which represents 2,000 businesses nationwide, proposed a three-pillar plan in preparing for the possibility that retail outlets would be ordered to close. 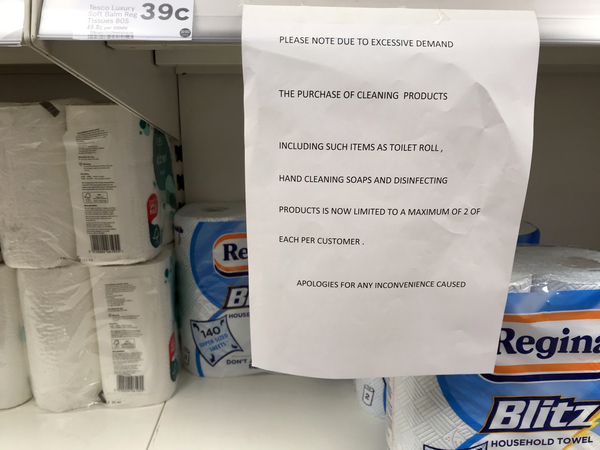 Notices in Tesco about due to excessive demands the purchase of cleaning products. Photo: RollingNews.ie

The group said that in the event of "a decree as to curtailed retail activity", it would require a full definition from the government as to what will constitute "essential retail".

This would be part of the first aspect of its three-part plan concerning "immediate common-sense measures", which includes launching health and safety protocols for retailers.

Emphasis would be placed on pharmacy and food as "they are our first responders".

Guidelines regarding perspex glass installation, distancing protocols, the use of gloves and masks would also be issued.

When businesses return and recommence commercial activity, they must not be met with any of these costs, the group said.

'Our colleagues have never faced a crisis of this scale'

With regard to people working in these businesses, Retail Excellence said: "We must support our people at this time. 200,000 retail colleagues and their families will be financially impacted by this crisis."

It said all rent and mortgage payments should be paused and adequate Social Welfare supports must be put in place to see people through the next six to ten weeks.

The organisation added: "Our colleagues have never faced a crisis of this scale. Their mental health is extremely important."

Finally, the third pillar of the plan would entail steps to recovery, with the group advising that the government think about establishing an economic recovery team.