A new report has recommended banning the public from rape trials in Northern Ireland. The review ...

A new report has recommended banning the public from rape trials in Northern Ireland.

The review by retired British Judge John Gillen was ordered in the wake of a trial in Belfast last year - in which rugby players Paddy Jackson and Stuart Olding were acquitted of rape.

Mr Jackson was also found not guilty of sexual assault.

Mr Gillen has said he is in favour of "confining access to trials of serious sexual offences to officers of the court, persons directly concerned in the proceedings, bona fide representatives of the press, a parent, relative or friend of the complainant".

"I fully appreciate that a criminal trial is a public event. The principle of open justice puts the judge and all who participate in the trial under intense scrutiny.

"The glare of contemporaneous publicity ensures that trials are properly conducted.

"It is a valuable check on the criminal process.

But he added: "Open justice is never an absolute concept. In Northern Ireland we exclude the public in family cases and youth justice cases."

He also pointed out that members of the public are excluded from attending rape trials, and certain other sexual offences, in the Irish courts.

While in New Zealand, New South Wales and Scotland the public are excluded when the complainant gives evidence. 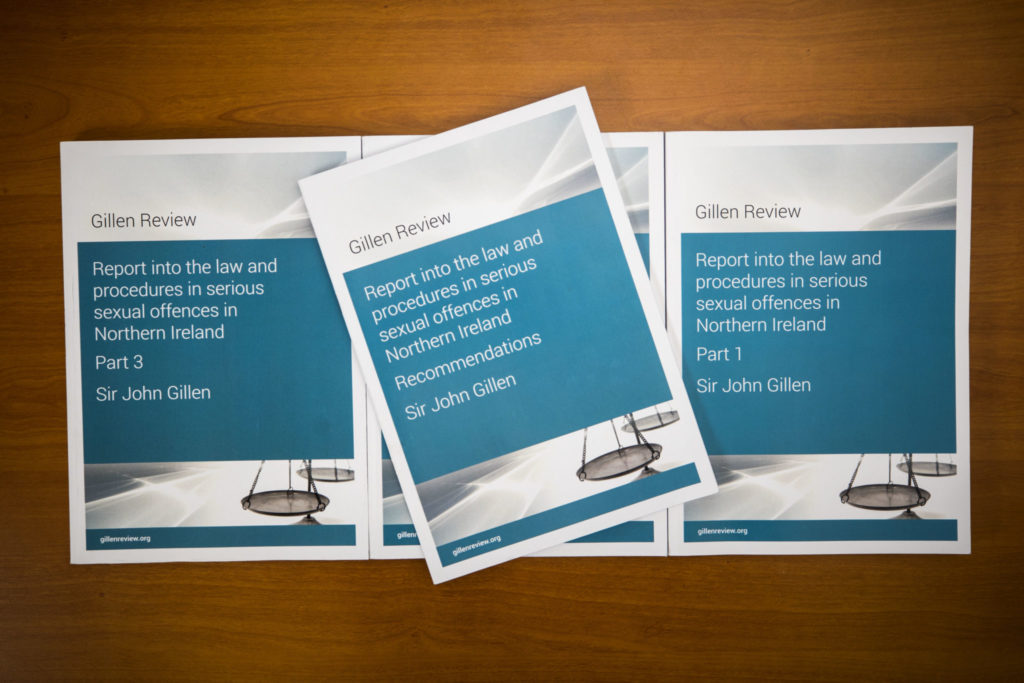 A view of the Gillen Review Report byJohn Gillen into the law and procedures in serious sexual offences in Northern Ireland | Image: Liam McBurney/PA Wire/PA Images

"If we are to challenge gross under-reporting, high dropout rates and an unacceptably daunting trial process, I consider the arguments in favour of restricted access measures carry convincing weight", he said.

Mr Gillen has also weighed in on the use of social media in court.

He said he was in favour of "strong measures" to control the current impact that social media is having in trials of serious sexual offences.

"Use of social media is having an adverse impact", he said, to the extent that in some instances it is potentially "removing the right to complainant anonymity".

He also said it could destroy the reputations and lifestyles of complainants and innocent accused persons.

"This is a widespread concern throughout jurisdictions worldwide.

"We need to avoid piecemeal approaches and instead to push forward a cohesive national framework to meet a problem that is national in nature and potentially strikes at the heart of our criminal justice system", the report said.

"That joint approach needs to be based on empirical evidence rather than broad assumptions often based on anecdotal accounts."

As part of his recommendations, Mr Gillen said measures should be introduced at the outset of a trial to combat "rape myths."

"This may involve presenting to the jury educational material, a short video, judicial directions and, where appropriate, supported by expert evidence.

"In the wider context there is a need for an extensive public awareness and school education campaign."

'I made the right decision not to report my assault'

One in Four charity says almost half its clients are men