A large family syndicate from The Naul in north Dublin have emerged as winners of last night's me...

A large family syndicate from The Naul in north Dublin have emerged as winners of last night's mega €175.4m Euromillions jackpot.

The family have said they are overjoyed at their massive win.

This is the highest winning jackpot in the history of the National Lottery.

The last highest win was €115m won by Limerick woman Dolores McNamara on a Euromillions jackpot in 2005.

A family spokesperson, who is married to one of the syndicate, said: "This is unbelievable. It will take us some time to get our heads around this win and to organize ourselves."

He added: "We are a very close family. We meet every week and we take holidays together every year. This is a dream come true for us.

"We don't want this to change our lives.

"What is so exciting is that we will be able to share this money with children, grandchildren and extended family members."

After realising their good fortune, one syndicate member put the winning ticket in an Argos catalogue and put it under her mattress for safe keeping.

"I didn't sleep a wink all night", she said. 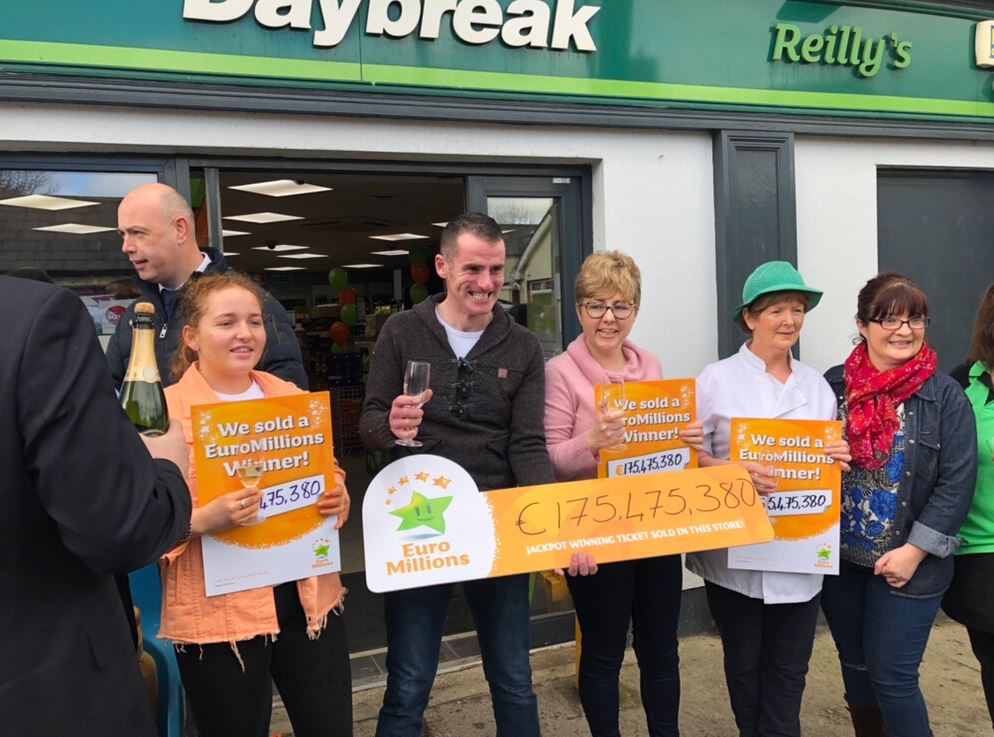 Reilly's Daybreak in Naul, where the winning ticket was sold, will receive €25,000 | Image: Aideen Finnegan

The family has deposited the winning ticket for safe keeping with the National Lottery, and arrangements are being made for the prize claim to be paid out in the next few weeks.

The spokesperson said: "We know this is a huge story and there is great excitement over this win. We need time to let this news sink in and to prepare to collect our winnings.

"We are a normal family and we don't want this to dramatically change our lives."

Most of the family group are retired and are looking forward to having time to enjoy their winnings.

Spokesperson for the National Lottery, Miriam Donoghue, also explained that the shop where the ticket was sold gets a big bonus.

"We have heard this morning from the winner of the €175m Euromillions jackpot," she said.

"We are also in a position to reveal the shop that sold this golden ticket - it is Reilly's Daybreak in Naul in north county Dublin.

"That is standard for any shop that sells a Euromillions winning jackpot, so they have a lot to celebrate as well."

Welcome to the @NationalLottery winners room. Some lucky person(s) will be waking in here very soon #Euromillions 💰💰💰 pic.twitter.com/zROsR4xqKC

The owner of the shop, Les Reilly, said he literally got sick when he heard the news.

“I was disappointed we didn’t win the big jackpot [ourselves] and then, as a normal Wednesday morning, I came to work put out the papers and then the National Lottery contacted us and said, ‘you sold the winner,’” he said.

It was announced last night that one Irish ticket holder took home the prize.

It will take a number of days before the money from partner Euromillions countries will arrive in Ireland.

#BREAKING We can confirm that Ireland's 14th #Euromillion's winner of last nights incredible record-breaking €175m jackpot has made contact with @NationalLottery 🎇😁🙌 pic.twitter.com/YGXAMi5Ll8

It is the 14th Irish Euromillions win since the game was launched in Ireland in 2004.

The jackpot had been rolling for several weeks.

With reporting from Kim Buckley and Jack Quann