Britain’s Prince William and Kate Middleton have met with community groups on the second day of...

Britain’s Prince William and Kate Middleton have met with community groups on the second day of their royal visit to Ireland.

The couple met with young people at a mental health charity in Dublin on Wednesday morning.

The British royals spent around 30 minutes at Jigsaw in Temple Bar.

The organisation works with young people aged 12 to 25.

The couple first sat down met with three young people who have used the facility.

They drank what appeared to be tea out of mugs that said ‘One Good Adult’ - the motto of the organisation.

One of the young people who they spoke to, Lauren Russell, said they were very interested in her story.

"They really listened and they asked questions. They asked how I found the stigma which was a thing for me and I wasn’t always open."

She added: "I was nervous when they walked into the room as it was surreal. But once they sat down, the nerves went as they were so lovely and genuine."

One of the Jigsaw volunteers could be heard saying to Prince William: "It’s surreal, you being here" and he replied - alluding to the photographers and reporters - "Even stranger when all these people come in half way through your conversations."

In conversation with community campaigners, teachers, parents and coaches on the impact of @JigsawYMH — which provides vital support to young people across a range of one-to-one, community, school and online services #RoyalVisitIreland pic.twitter.com/Ml4LgwjB74

Along with young people who use the organisation, the couple also met with members of the Jigsaw team and volunteers.

Volunteer Josh Graves says the royals were more ordinary than he thought.

"I just found it weird because you hear all these horror stories about the protocol, you know that you’re not meant to have any other contact apart form a handshake.

"But in mid-conversation William would put his hand on my shoulder and just engage, which is normal from any other humans but when you meet the royals you expect different circumstances".

Jigsaw are working hard to spread the message of the importance of having 'One Good Adult' in a young person’s life, and the positive benefits this can have on their mental health.

Alba Mullen, a youth representative on the Jigsaw board of trustees, said: “I was so struck by the similarities in our community work in Jigsaw and that of Heads Together, the campaign the Duke and Duchess spearhead in the UK.

"I really hope this is the start of an ongoing conversation. Supporting young people’s mental health in places where they learn, live, work and play is crucial. It’s all about a collective effort.”

It wasn't smokin bones but freezing bones in Temple Bar but despite the cold crowds still came out for Will & Kate. @NewstalkFM @PatKennyNT #RoyalVisitIreland @KensingtonRoyal pic.twitter.com/1hJ4g1I0ej

Hundreds of people lined the streets outside Temple Bar for a glimpse of the couple.

They are also visiting Kildare, Meath and Galway as part of their trip.

The pair moved on to another youth charity based in Prosperous, Co Kildare - where crowds had again gathered to catch a  glimpse of the couple.

The Duke and Duchess of Cambridge have arrived at Extern. Traffic restrictions in place in Prosperous have now been lifted #RoyalVisitIreland pic.twitter.com/hypoYKtEFY

Extern works with children at risk of trouble with the law or in school.

While there they worked in the kitchen, chopping vegetables and talking to staff and users.

At Savannah House The Duke and Duchess of Cambridge joined young people supported by @Extern1978 for a spot of cooking 👩‍🍳👨‍🍳 the charity provides a safe space to support vulnerable young people and families who are going through challenging times #RoyalVisitIreland pic.twitter.com/Y3pTErBY6U

They also visited Teagasc in Co Meath - where they spoke to farmers about sustainability.

The couple were met and welcomed by acting Agriculture Minister Michael Creed.

Before departing, the royal couple were presented with a gift by Teagasc chairman Liam Herlihy: a 5,000-year-old piece of Irish bog oak.

Principal of local primary school Kiltale National School, Eileen O'Reilly, said the couple told her they loved their trip to Ireland and want to return with their three children.

"They said they would like to come back her with the kids and do a cycling tour and see the Irish countryside."

"It was so exciting to meet a real life princess." 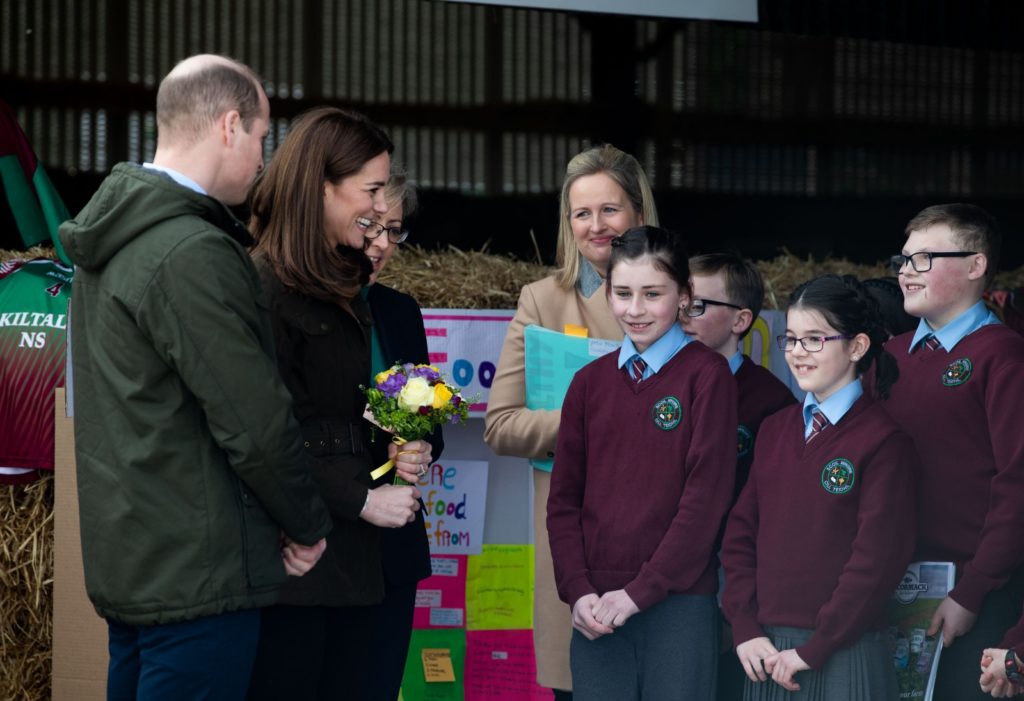 "They were very nice and lovely to us. They asked us all about our project on healthy eating and exercise as we learned that Irish young people don’t get enough exercise and that one in four are overweight."

Kiltale pupil Rachel Mulligan who met the couple said: "William told us that it is important to go outside more and to get lots of sleep."

"I told them Irish people are very proud of their cattle and farms because the grass is so green and they stay outside and not in sheds."

Kate gave her first nod to Irish fashion on the trip, as she wore a jacket and a pair of flat boots by Irish brand Dubarry.

From there, it was back to Howth in Co Dublin to meet with officials from the Marine Institute.

At the Marine Institute - Ireland's state agency for marine research - the role of the ocean, climate change and actions to safeguard it were the focus of conversations.

Other topics included Ireland's role in exploring and mapping the seabed and international collaboration on ocean research.

Back in Co. Dublin, The Duke and Duchess visited incredibly scenic Howth this sunny afternoon, taking in sweeping views of the Irish coastline on the famous cliff walk☀️ #RoyalVisitIreland pic.twitter.com/aSGCL7DtBD

During a coastal walk of Howth Head, CEO Dr Paul Connolly spoke with the royal couple on several subjects that are central to the work of the institute - including the importance of the oceans to coastal communities and climate adaptation.

Dr Connolly said: "I was delighted to meet with their royal highnesses, the Duke and Duchess of Cambridge, to talk about shared interests in protecting our oceans and adapting to a changing climate."

"Our oceans are fundamental to life on Earth. They unite us - yet they face a multitude of challenges."

"Our focus in the Marine Institute is to further our understanding of our changing ocean."

The final stop for the royal couple was the Museum of Literature Ireland on St Stephen's Green in Dublin.

They attended a reception at the museum, and were welcomed by acting Tánaiste Simon Coveney. 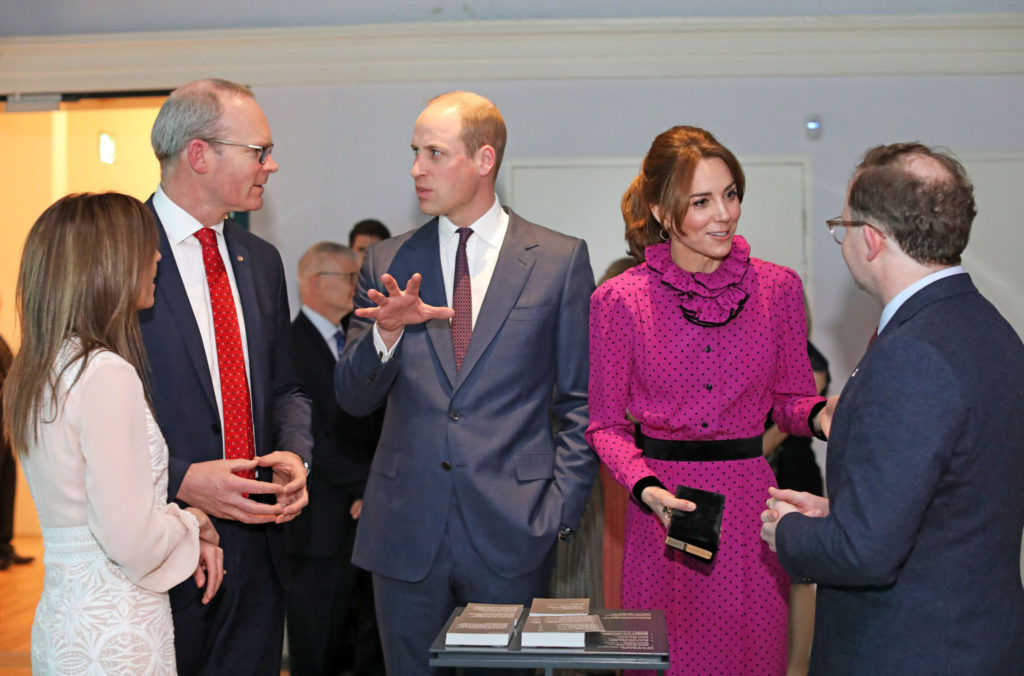 Britain's Prince William and Kate Middleton at the Museum of Literature Ireland, greeted by Simon Coveney and Ruth Coveney | Image: Julien Behal Photography/Pool images on behalf of the Department of Foreign Affairs and the British Embassy

Mr Coveney said: "This is an important visit. We have of course welcomed members of the British royal family to Ireland before, including Prince William’s grandmother, Queen Elizabeth, in 2011, a visit which represented a watershed moment for the Ireland-UK relationship.

"I very much welcome this visit by the Duke and Duchess, their first to Ireland, and hope this will be the first of many visits in the coming years.

"The Ireland-UK relationship is powered at its core by the hundreds of thousands of people who live, work and move seamlessly between these islands every single day, building and renewing connections between us.

"I am glad that their programme this week affords the Duke and Duchess an insight into the depth and intensity of those connections."

"And I am hopeful for the future of the Ireland-UK relationship, in particular when it is marked by the warmth, mutual understanding and respect that this week’s visit does so much to enhance."

The Duke and Duchess of Cambridge met representatives from Irish sport, film and television, business, charity and education sectors and of course, sampled pints of Guinness @homeofguinness #RoyalVisitIreland pic.twitter.com/mfFomld9Qa

On Thursday, the visit will include Galway city centre and a local GAA club.

Gardaí say traffic restrictions for the visit will be kept to the minimum required.

They spent Tuesday night at Farmleigh after a trip to the Guinness Storehouse ended their first day of engagements.

The event was hosted by the British ambassador to Ireland, Robin Barnett.

Earlier in the day, they met with President Michael D Higgins and the acting Taoiseach Leo Varadkar.

They also laid a wreath at the Garden of Remembrance.