Britain's Prince William and his wife Kate Middleton are in Ireland for a three-day visit. The co...

Britain's Prince William and his wife Kate Middleton are in Ireland for a three-day visit.

The couple touched down at Dublin Airport just after 2.00pm on Tuesday.

Their first stop was a meeting with President Michael D Higgins at Áras an Uachtaráin and his wife Sabina.

All four shared a laugh over when to stop posing for pictures! pic.twitter.com/IemJ3jxNH4

The couples discussed the close ties between the people of Ireland and Britain, and the importance of continuing and deepening close relations.

President Higgins, his wife Sabina and the royal couple also spoke about the implications of the UK's departure from the European Union, and the importance of continuing to build on the foundations of the Good Friday Agreement.

They also discussed the global challenges of climate change and biodiversity loss - and the urgent need to re-visit the fundamentals of how we organise our economies and societies if we are to tackle these threats.

They also got on well with Bród, one of the President's dogs.

The other dog, Síoda, has had surgery on her paw and so felt it best to sit out the royal visit.

From there, they laid a wreath at the Garden of Remembrance in Dublin city centre.

Crowds cheered as the couple arrived and were greeted by acting Minister of State Paul Keogh and Major General Sean Clancy.

The Army No 1 Band played the British national anthem, before two members of the Defence Forces carried the wreath and placed it on a stand before them.

William and Kate stepped forward and bowed their heads. 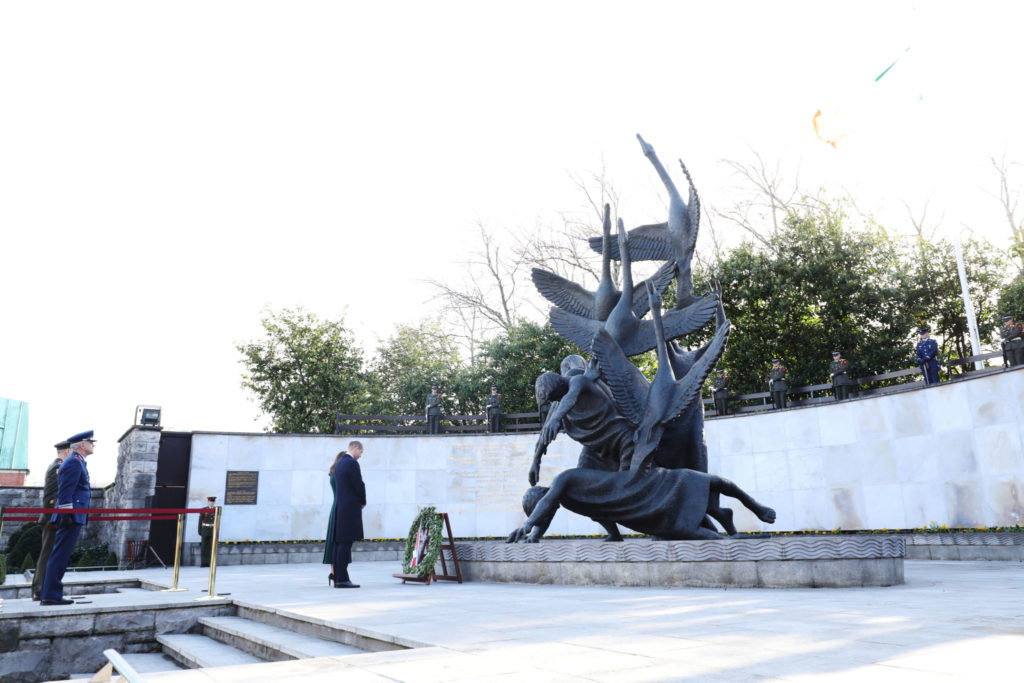 Britain's Prince William and his wife Kate Middleton at the Garden of Remembrance in Dublin | Image: Julien Behal Photography/Pool images on behalf of the Department of Foreign Affairs and the British Embassy

The wreath was decorated with a blue, white and red ribbon.

A Kensington Palace card attached to the wreath was personally signed by the couple.

It read: "May we never forget the lessons of history as we continue to build a brighter future together".

The couple then observed a minute silence, which was followed by the band playing the Irish national anthem.

William and Kate then went to Government Buildings, and were greeted by acting Taoiseach Leo Varadkar and his partner, Matt Barrett.

Taoiseach Leo Varadkar and his partner Matt Barrett greeting the Duke and Duchess of Cambridge at Government Buildings pic.twitter.com/YEurtZWGX0

The Cambridges were given a brief tour of the building en-route to Mr Varadkar's office, where they sat for a lengthy tete-a-tete.

There Mr Varadkar invited William and Kate to sign the visitor's book.

He translated it from Irish, explaining that it asked for a name and address - to which William asked: "Would you like an address?"

Mr Varadkar quipped back: "What's the postcode for Kensington Palace?"

He then lightheartedly asked Mr Barrett if he would like to sign the guest book, to which he laughed "No".

The four then sat down for a lengthy 25-minute private discussion.

The Duke and Duchess of Cambridge signed the visitors book in Taoiseach’s office, followed by a tête-à-tête. @LeoVaradkar @kensingtonroyal #RoyalVisitIreland pic.twitter.com/YCZzRWrzrE

They travelled on to Farmleigh and later visited the Guinness Storehouse following on from their diplomatic duties.

A party at the storehouse is being hosted by the British ambassador to Ireland, Robin Barnett. 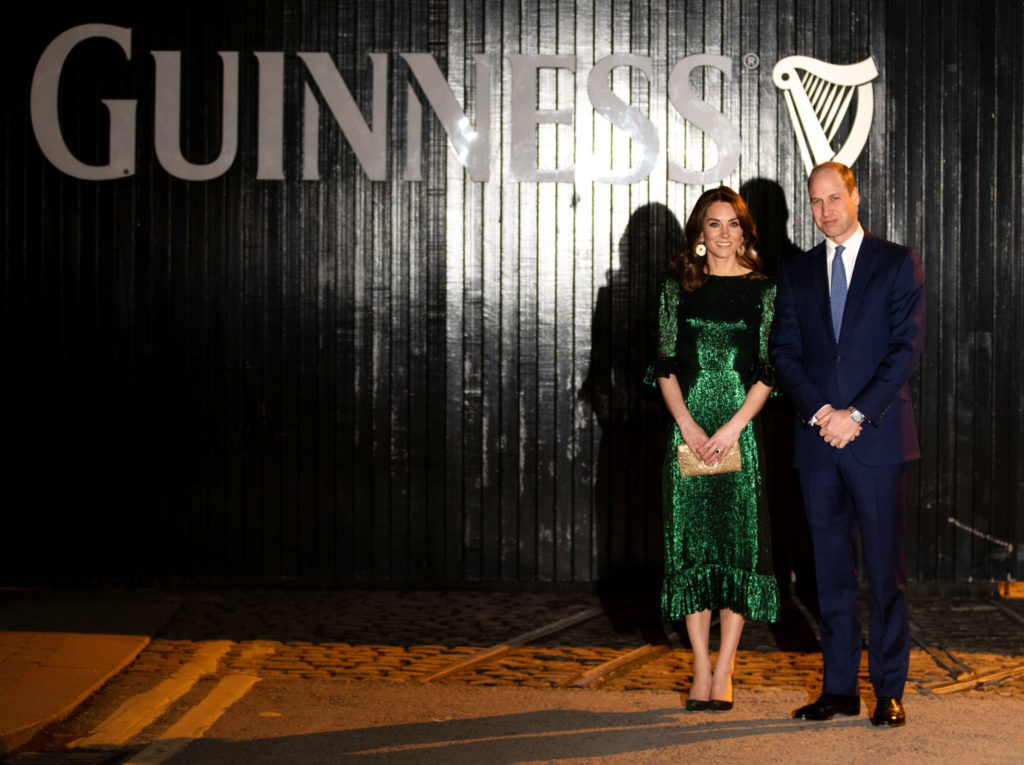 Britain's Prince William and his wife Kate Middleton arriving at the Guinness Storehouse in Dublin | Image: Julien Behal Photography/Pool images on behalf of the Department of Foreign Affairs and the British Embassy

The royal couple met a range of Ireland's famous faces from film, TV and sports - as well as people from sectors such as sustainability and environment, creative and cultural Ireland, education and research.

The couple were poured a pint of Guinness beer specialist Padraig McLaughlin.

The drinks were then served by the captain of the Irish women's rugby team, Sene Naoupu - who is Guinness' brand ambassador for the Six Nations.

Prince William opened a speech by addressing the people as 'Daoine uaisle'. 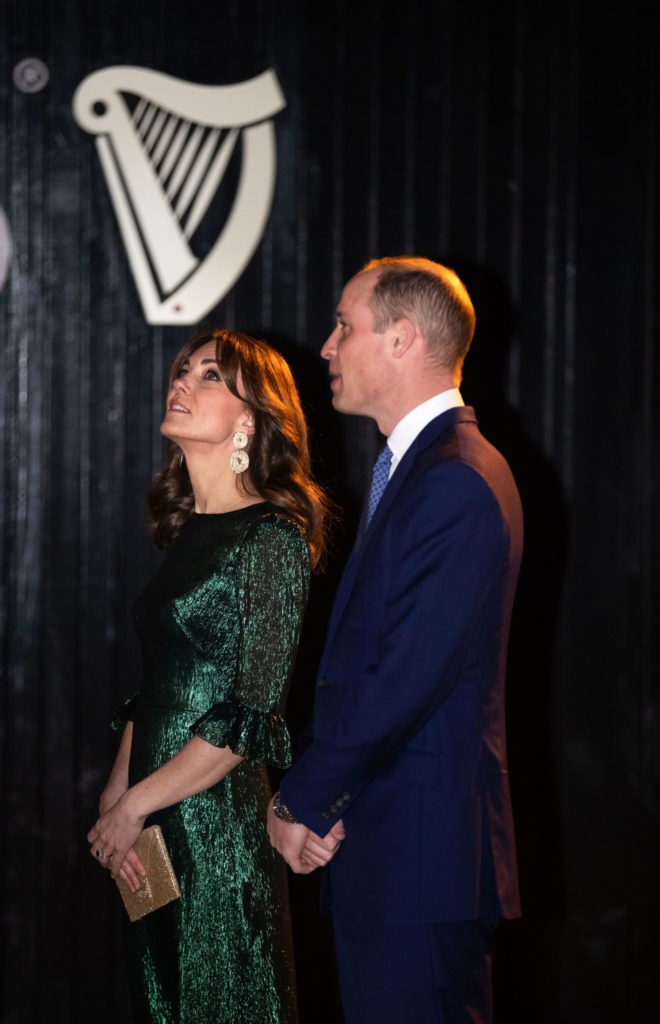 Britain's Prince William and his wife Kate Middleton arriving at the Guinness Storehouse in Dublin | Image: Julien Behal Photography/Pool images on behalf of the Department of Foreign Affairs and the British Embassy

He said that Ireland and the UK's friendship is very important.

"Catherine and I are delighted to be here tonight and are both very grateful to Robin for his generous words.

"Ireland is a country that we have both heard so much about, so we are really excited to be here with you to see it first-hand for ourselves.

"In coming to the Guinness Storehouse, we are retracing the footsteps of my grandmother, who was shown how to pour the perfect pint here in 2011.

"Ladies and gentlemen let me tell you it is not often that I find myself following the Queen to a pub!

"But I am looking forward to testing for myself the theory that Guinness tastes even better in Ireland than overseas.

"On a slightly more serious note I just wanted to thank all of you in the room for coming here this evening.

"Thank you for all that you do to support the very special relationship between our two countries.

"It has been a pleasure to meet so many of you this evening who demonstrate the breadth of our connections across the arts, sports, uniformed services, education and research, and charity sectors."

"We value it as we do your friendship and are committed to strengthening it further."

"We are very much looking forward to our next two days in Ireland, where I have no doubt we will continue to be impressed by the creativity, warmth and hospitality the Irish people have to offer."

He ended the speech by raising his pint and saying 'Slainte'.

They will also travel to Meath, Kildare and Galway as part of the trip.

On Wednesday visits will include locations in Temple Bar, Prosperous, Co Kildare, Grange in Co Meath and Howth.

While on Thursday, the couple will visit Galway city centre and a local GAA club.

Gardaí say traffic restrictions will be kept to a minimum for the visit.

"The public can expect temporary rolling road closures, to facilitate security escorts over the course of the 3rd - 5th March 2020, in the locations above.

Localised traffic restrictions in place in the vicinity of the Garden of Remembrance including North Frederick Street and Parnell Square North. Traffic will be diverted away from Parnell Square.  Local traffic diversions are in place.

"Any impact on the public will be localised and minimal", they say.

William and Kate will arrive and depart from Dublin Airport.

Kensington Palace has said the trip will "highlight the many strong links between the UK and Ireland."

"The visit will also focus on the relationship between the two countries, and build on the theme of remembrance and reconciliation."

The visit is at the request of the UK's Foreign and Commonwealth Office.

It followings on from the historic visit of Queen Elizabeth II here in 2011.

Tourism Ireland said the visit is good news for tourism and a unique opportunity to convince potential holidaymakers to visit Ireland. 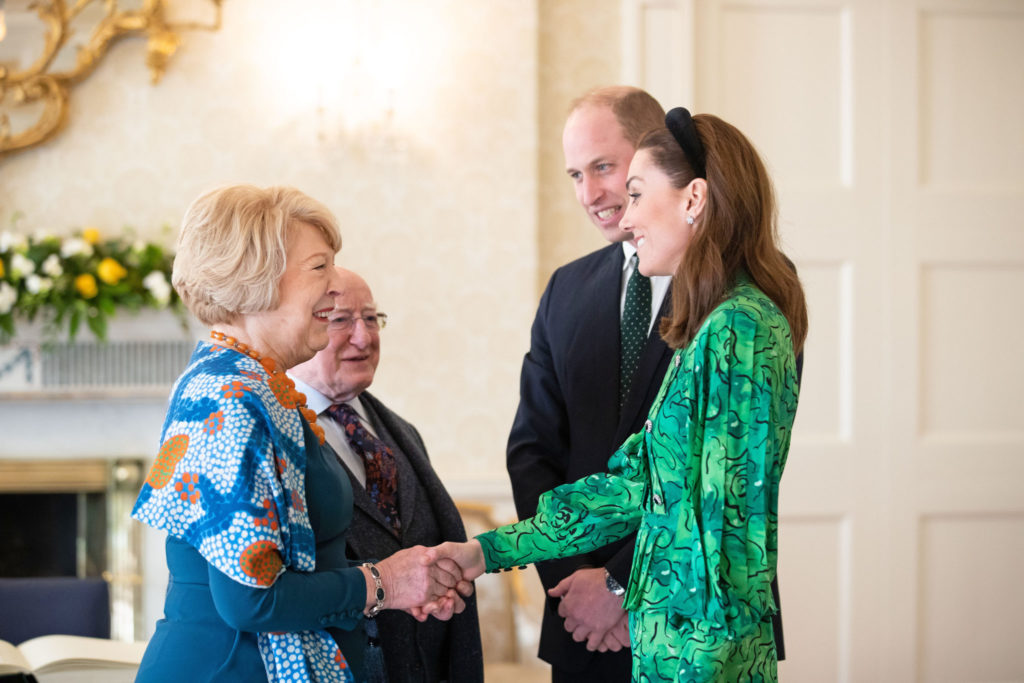 Britain's Prince William and Kate Middleton arrive at Áras an Uachtaráin and are greeted by President Michael D Higgins and his wife Sabina Higgins | Image: Julien Behal Photography/Pool images on behalf of the Department of Foreign Affairs and the British Embassy

A large media contingent has travelled here to cover the visit, bringing the story to millions of people in Britain and elsewhere around the world.

Tourism Ireland has said it wants to "inspire people to come and follow in the royal couple's footsteps, with inviting messages which demonstrate the friendliness, welcome and fun for which Ireland is renowned."

Niall Gibbons, CEO of Tourism Ireland, said: "This week's visit by the Duke and Duchess of Cambridge is a wonderful opportunity to showcase Ireland to a huge audience of prospective holidaymakers across Britain and has the potential to deliver a boost to Irish tourism.

"A large media contingent has travelled here to cover the visit, bringing the story to millions of people in Britain, and elsewhere around the world, and providing a truly unique opportunity to highlight Ireland as a wonderful holiday destination.

"Tourism Ireland will take every opportunity to exploit the tourism potential from the extensive publicity around the visit."