The speaker of the US House of Representatives has warned that there will be no new trade deal be...

The speaker of the US House of Representatives has warned that there will be no new trade deal between the US and the UK if Brexit harms the Irish peace process.

Nancy Pelosi was speaking as she began a two-day visit to Ireland.

In a speech at the Department of Foreign Affairs, she issued a direct warning to people who believe that the UK can ease the consequences of a 'no-deal' Brexit through a new trade deal with the US.

He said UK officials should 'not think for one minute' that there is "any comfort for them in the fact that if they leave the EU, they would quickly have a US / UK trade agreement."

"That is just not on the cards if there is any harm done to the Good Friday accords," she said.

"Don't even think about that."

It comes after she told an event at the London School of Economics last night that the Good Friday Agreement is not something that can be bargained away.

"This is not a treaty only," she said.

"It is an idea; it is a value; it is something that is a model to the world."

Speaker of the US House of Representatives Nancy Pelosi arrives with Tánaiste Simon Coveney at the Department of Foreign Affairs. pic.twitter.com/qwDbmgYKxC

Ms Pelosi is leading a US Congressional delegation that is holding high-level discussions with senior government officials and civil society leaders in London, Dublin and Northern Ireland.

She is due to meet with the Taoiseach this evening before delivering a speech to both houses of the Oireachtas in the Dáil chamber tomorrow.

She has described the opportunity to speak during the Dáil centenary as a "immense honour" and said it is an opportunity celebrate the "deep and enduring friendship between the United States and Ireland." 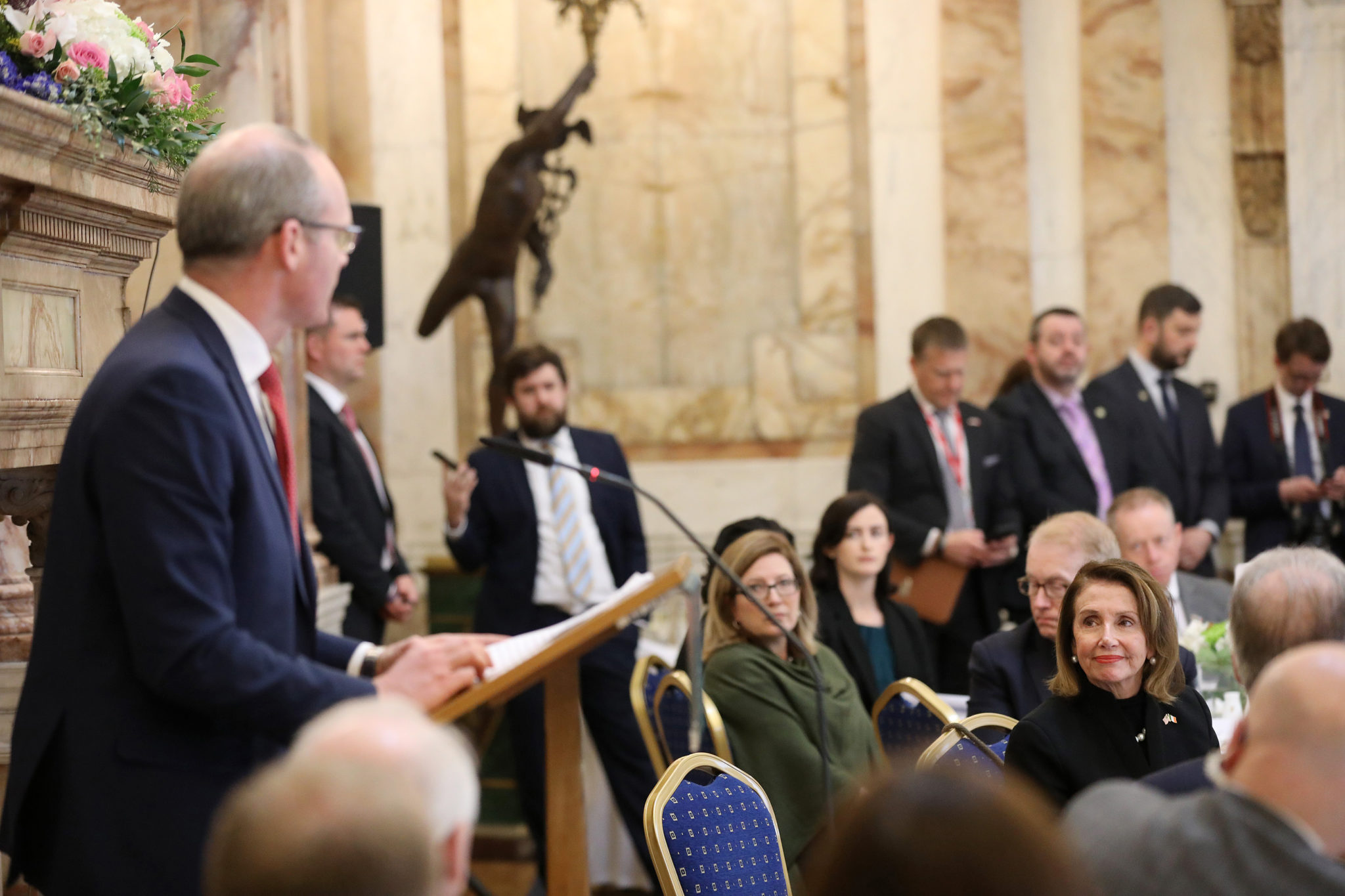 Nancy Pelosi, Speaker of the US House of Representatives, looks on as the Tánaiste Simon Coveney speaks at Iveagh House, 16-04-2019. Image: Julien Behal

Welcoming the delegation to Dublin this afternoon, the Tánaiste Simon Coveney said the visit offered an opportunity to "celebrate the deep and enduring US-Ireland ties of kinship and friendship, of culture and trade, of shared interests and shared values. "

"I welcome Speaker Pelosi and her delegation as strong and steadfast friends of Ireland," he said.

"I and my colleagues in Government deeply appreciate US Congressional support for peace on this island and for the provisions and promise of the Good Friday Agreement.

"I know that we also share huge ambition for the future Ireland / US relationship - an ambition set out in the Government’s new Strategy for the US." 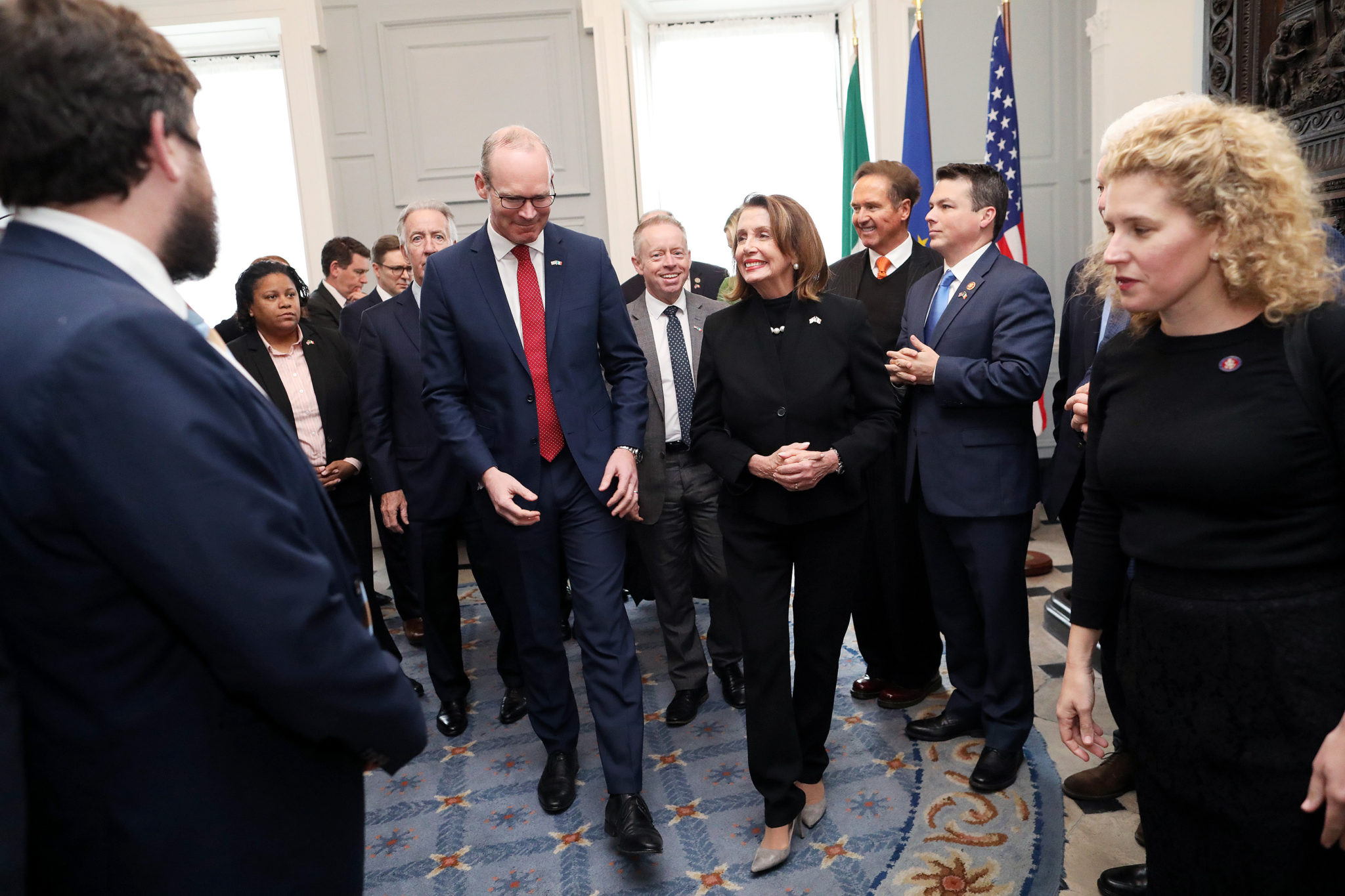 Nancy Pelosi, Speaker of the US House of Representatives, with the Tánaiste Simon Coveney at Iveagh House, 16-04-2019. Image: Julien Behal

The Taoiseach will host a dinner in honour of the delegation at Dublin Castle this evening.

The President Michael D Higgins will host a working meeting for the delegation tomorrow.