Criminal gangs linked to loyalist paramilitaries groups are orchestrating the violent protests in...

The North's Deputy First Minister says the PSNI has confirmed to her that 'people involved in racketeering and extortion' are among those responsible.

She said there's 'no rhyme or reason' why paramilitary groups such as the UDA (Ulster Defence Association) or UVF (Ulster Volunteer Force) should still exist.

She was speaking after a day of emergency meetings in the North, following the violent scenes in Belfast last night and wider disorder in recent days.

At least 55 PSNI officers have been injured in the violence, while a bus was set on fire and a photographer attacked during last night's protests.

The Northern Ireland Executive, meanwhile, also issued a statement condemning the violence over recent days and calling for an end to the protests.

On The Hard Shoulder, Michelle O'Neill said the last few days have been 'pretty horrendous'.

She said: "Over the course of the week, we had sporadic pockets of violence and disruption. What we had last night was nearly an upping of the ante… that very much troubles me and worries me.

“Certainly, I spend a good bit of today talking to the PSNI and the Chief Constable, who has confirmed it’s being orchestrated by criminal gangs… people involved in racketeering and extortion.”

Ms O'Neill said unionist paramilitary groups such as the UDA and UVF still exist, despite there being 'no rhyme or reason' why they should 23 years after the Good Friday Agreement.

She observed: “These groups are the heart of sending youngsters as young as 13 out onto the streets to do their bidding.

"The vast majority [of those young people] don’t even know what they’re out on the streets for."

She said the young people involved now risk ending up with a criminal record. 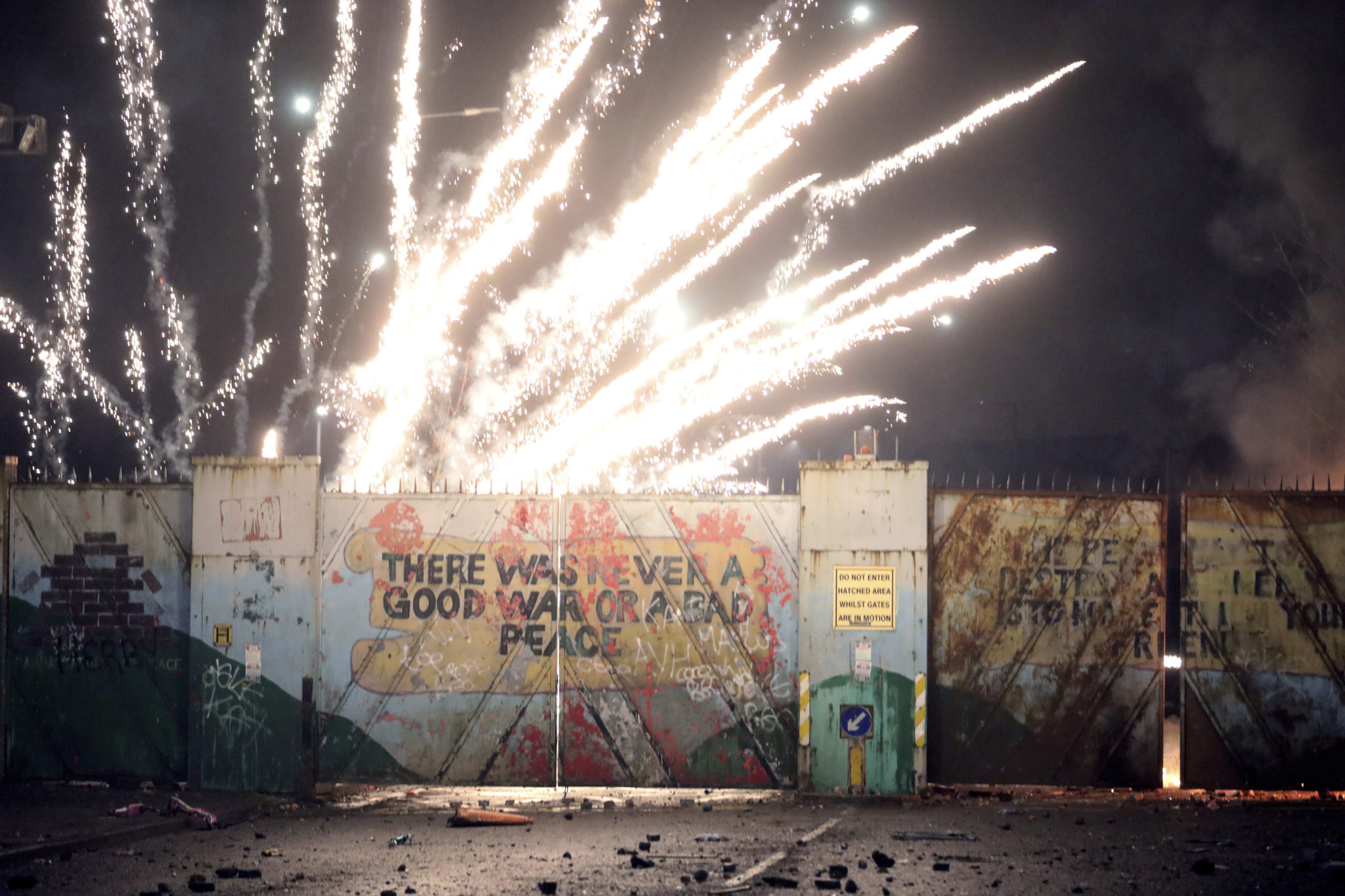 A firework explodes as Nationalists and Loyalists clash with one another at the peace wall on Lanark Way in West Belfast, Northern Ireland, Wednesday, April 7, 2021. The police had to close roads into the near by Protestant area as crowds from each divide attacked each other. (AP Photo/Peter Morrison)

The Sinn Féin vice-president said poverty is a major issue in some of the communities impacted, and that everybody needs to 'take on board' that some people are feeling left behind.

First Minister Arlene Foster has come under fire for a tweet in which she condemned the violence but accused Sinn Féin of being 'the real criminals'.

It comes after a decision by authorities not to prosecute senior members of Sinn Féin for attending the funeral of veteran republican Bobby Storey last summer while COVID-19 restrictions were in place.

Ms O'Neill said the DUP leader's tweet was 'most unfortunate, to say the least' - saying there can be no false equivalence drawn between attendance at a funeral and violence on the streets.

Ms O'Neill observed: “At a time of such volatility, people need to be very careful - words are very powerful.”