The Taoiseach Micheál Martin has appealed for calm, after more violence on the streets of Northe...

The Taoiseach Micheál Martin has appealed for calm, after more violence on the streets of Northern Ireland.

It comes ahead of an emergency meeting of the Stormont Assembly, after a bus was hijacked and set on fire and a photographer attacked on Wednesday.

The scenes followed several nights of unrest in loyalist communities, amid tensions over the Northern Ireland Protocol in the UK and EU's Brexit deal.

Police said the bus was pelted with petrol bombs at the junction of Lanark Way and Shankill Road in west Belfast, while stones were thrown at officers and a press photographer was assaulted nearby.

Kevin Scott, photographer for the Belfast Telegraph, explained: "I'd went to move my car at one point, realising that the situation was ever-changing.

"And as I was walking to my vehicle I heard footsteps running behind me, and when I turned around I was being attacked by one male - while another one stood by and watched him.

"I was pulled to the ground, my cameras taken and thrown and kicked around the street before then the second male directed sectarian abuse towards myself".

In a statement, Mr Martin said: "I condemn the violence and attacks on the police that we have witnessed over the last number of days in the North.

"The only way forward is to address issues of concern through peaceful and democratic means. This evening’s attacks on a journalist and bus driver are deeply concerning and are in no one’s interests.

"Now is the time for the two governments and leaders on all sides to work together to defuse tensions and restore calm.

"My Government has listened to and will continue to listen to and engage with the views of all communities in Northern Ireland.

"But the way to address genuine issues of concern is through peaceful and democratic means."

He tweeted: "I am deeply concerned by the scenes of violence in Northern Ireland, especially attacks on PSNI who are protecting the public and businesses, attacks on a bus driver and the assault of a journalist.

"The way to resolve differences is through dialogue, not violence or criminality." 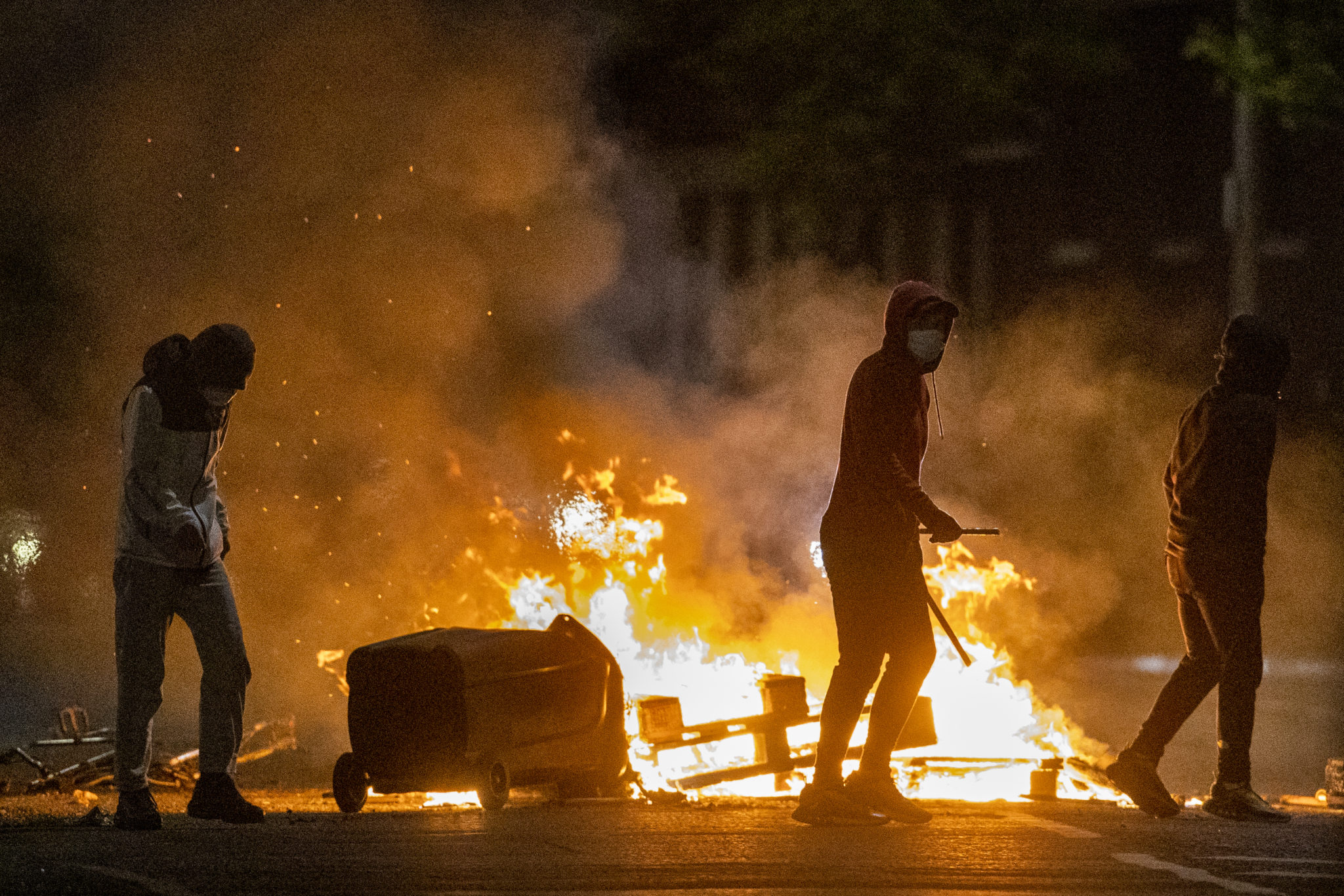 People stand next to a fire in a street in Belfast during further Northern Ireland unrest. Picture by: Liam McBurney/PA Wire/PA Images

The chief executive of bus company Translink said the driver was "badly shaken" but unhurt.

He said that all passengers had got off the bus when it was targeted and that all services in the area have been suspended until it is "safe" to reinstate them.

Crowds of up to 500 people gathered as the incident unfolded.

'This is not protest'

Ahead of Wednesday's violence, the Northern Ireland Assembly had already been recalled after rioting left more than 40 police officers injured.

It had not been due to return until April 12th.

Northern Ireland First Minister Arlene Foster tweeted: "There is no justification for violence. It is wrong and should stop."

In another tweet, containing video of the bus attack, she said: "This is not protest. This is vandalism and attempted murder. These actions do not represent unionism or loyalism. They are an embarrassment to Northern Ireland".

Deputy First Minister Michelle O'Neill confirmed the meeting would take place on Thursday morning and condemned the "huge distress" being caused to the communities involved.

A 13-year-old boy was one of nine people arrested when trouble flared in loyalist parts of Belfast and Derry earlier this week and over the weekend.

Tension has been simmering for months over the Brexit Protocol, establishing a trade border in the Irish Sea.

It is thought a decision not to prosecute anyone for alleged breaches of COVID-19 regulations at the funeral of Bobby Storey has also added to the situation.

Main image: Taoiseach Micheal Martin at a press conference during a visit to the Citywest COVID-19 Vaccination Centre in Dublin. Picture by: Brian Lawless/PA Wire/PA Images