Some one in 10 motorists intend on replacing their petrol or diesel car with a fully electric veh...

Some one in 10 motorists intend on replacing their petrol or diesel car with a fully electric vehicle, when they next change their car.

A recent AA car insurance survey has found that in total, one in three motorists now describe themselves as 'more likely than not' to purchase an electric vehicle when they next purchase a car.

AA has said this highlights importance of investing in charging infrastructure, to ensure Ireland is prepared for an uptick in electric vehicle demand.

The survey of over 5,000 Irish motorists found that 9.63% of respondents stated that they would likely only consider an electric vehicle when they move on from their current car.

Meanwhile, a further 23.56% indicated that while they were leaning towards purchasing an electric vehicle in the near future, they would also consider petrol or diesel alternatives when they next change vehicle.

AA director of consumer affairs Conor Faughnan said: "Over the last 12 months we have seen an increase in interest in electric vehicles, but it still remains relatively early days in the move away from petrol and diesel cars.

"At one stage we spoke about electric vehicles as the future of motoring, but that future is already a part of modern-day motoring.

"Right now, we're still speaking about relatively small numbers of electric vehicles on Irish road, but it's likely that the uptake will be somewhat of a hockey-stick style curve.

"Once people begin to become more comfortable with the idea of electric only cars and accept that current EVs are more than capable of meeting the driving needs of most people, then demand for these cars will surge quite quickly."

According to the survey, those over the age of 65 are the most likely to go electric in the near future, with 11.17% of respondents in this age bracket saying they would only consider electric vehicles in the future.

Electric vehicles also appear more popular with those driving in more urban areas - with Dublin having the highest percentage of those only willing to consider electric cars for future purchase with 11.20%. 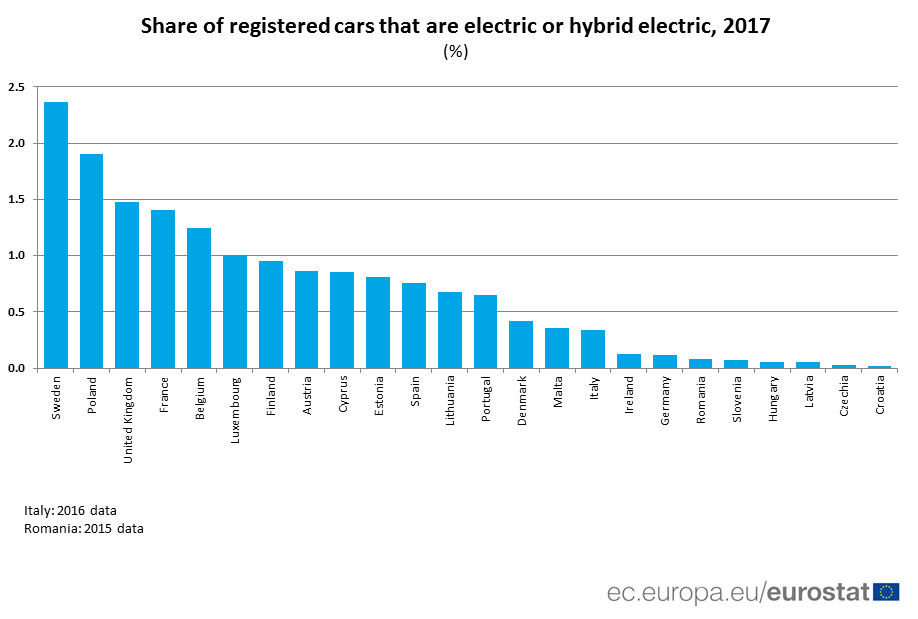 It comes as recent transport statistics for EU countries found the number of electric cars is on the rise.

In 2017, there were 262 million cars registered in the European Union member states, Eurostat said.

Around two million of these were classified as either electric cars or hybrid electric cars that can be driven in combination with a petrol or diesel engine.

"There has been a steady increase in the number of electric and hybrid electric cars registered across the EU in recent years.

"In particular, the number of hybrid electric-petrol cars in 2017 (1.5 million) was almost seven times the number recorded in 2013 (0.2 million)", Eurostat added.

The number of electric or hybrid cars registered in Ireland in 2017 was less than a quarter of one percent.