The Irish Government is advising citizens whose presence in China is "not essential" to leave the...

The Irish Government is advising citizens whose presence in China is "not essential" to leave the country.

The Department of Foreign Affairs also says anyone with underlying medical conditions should not travel there.

In updated travel advice, it says this is "a precautionary measure".

Citizens are being advised to contact their travel agency or airlines for available routes out.

The advice remains at 'Avoid non-essential travel' - the second-highest level of alert.

It comes after the Department of Health's National Public Health Emergency Team (NPHET) met earlier on Tuesday, amid the ongoing coronavirus outbreak.

It says there are still no confirmed cases here - but that Ireland is well positioned to detect and respond to a case that might arise.

The NPHET will meet again next Tuesday.

Meanwhile, the first meeting of the Expert Advisory Group, to be chaired by Dr Cillian De Gascun, will take place on Wednesday.

It adds: "Ireland will continue to monitor the situation and to participate in the international assessment of response to this novel Coronavirus through the European Centre for Disease Control and the WHO." 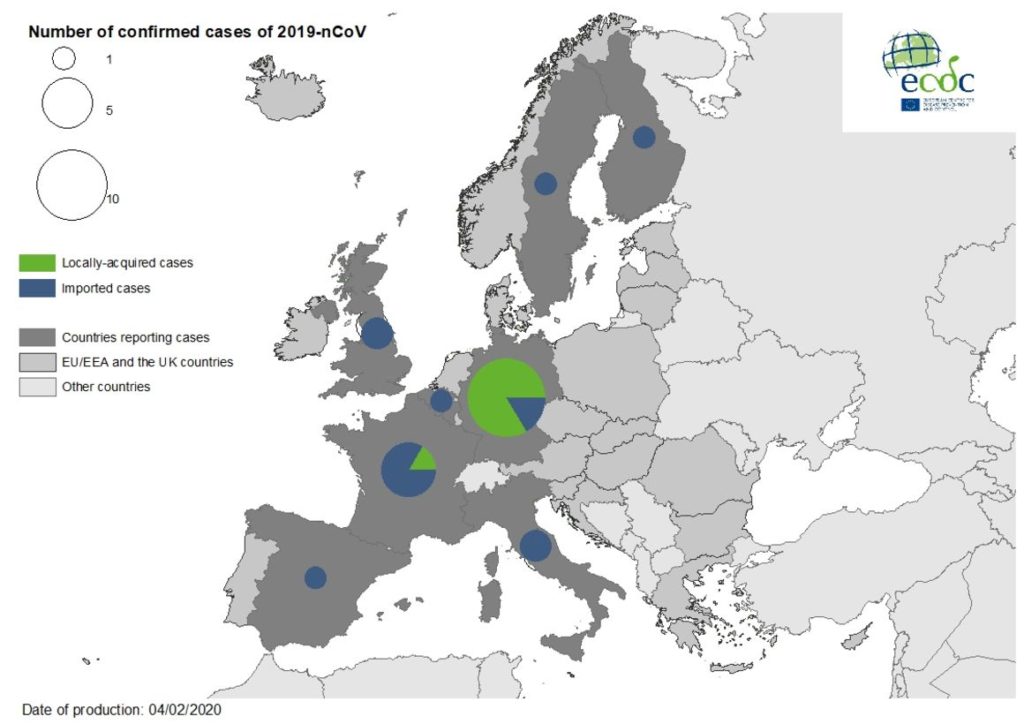 Confirmed coronavirus cases in the EU and the UK | Source: European Centre for Disease Prevention and Control

World Health Organisation (WHO) officials said there have been 27 cases of person-to-person coronavirus spread in nine countries outside China.

The WHO also said 22 nations have officially reported trade or travel-related measures linked to the virus.

Officials added that the measures should be short in duration, proportionate and considered regularly.

The WHO's director-general Tedros Adhanom Ghebreyesus has written to all health ministers and told them to improve data-sharing on the coronavirus immediately.

The number of deaths from the coronavirus outbreak in China has risen to 426, with the total number of cases now standing at over 20,400.

The European Centre for Disease Prevention and Control (ECDC) says of the 427 deaths reported, 426 have been from China.

One death has been reported from the Philippines.

Main image: An airline passenger wearing a face mask walks out of the international terminal at the San Francisco International Airport in the United States | Image: Yichuan Cao/SIPA USA/PA Images