Latest figures have revealed details of where Ireland's coronavirus outbreaks were reported last ...

A cluster or outbreak refers to situations when two or more cases of COVID-19 have been confirmed in a setting.

There was a sharp rise in the number of family outbreaks in private homes reported last week - up to 259, compared to 131 the previous week.

Dr Ronan Glynn had previously noted there was likely to be an 'unusual' numbers of family outbreaks as health officials 'catch up' with tracking and tracing - meaning they now have the resources to identify and link more clusters.

Overall case numbers have continued to decline in recent weeks, and some of the figures reflected in the newly-released figures are therefore related to older clusters. 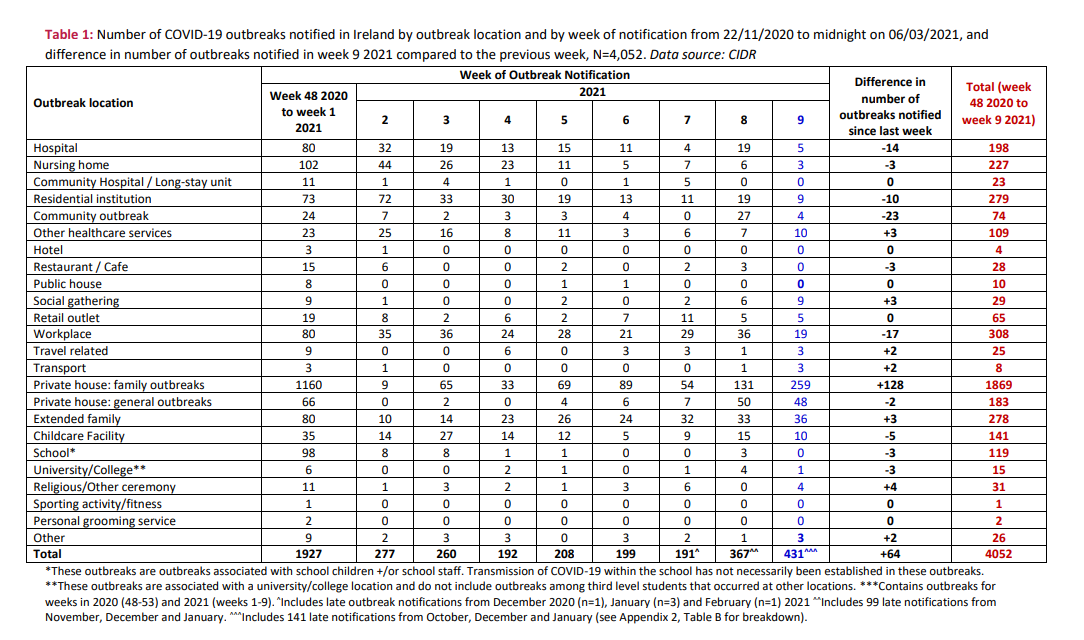 Last week was the first week around 300,000 children and teenagers returned to school after Christmas, and no new outbreaks had been reported in school settings as of last Saturday.

Officials have said there's no early signs of a surge in clusters after school reopenings.

One cluster was linked to a university/college last week, while there were ten associated with childcare facilities.

The number of outbreaks in hospitals dropped substantially, with just five recorded compared to 19 the previous weeks.

Nursing homes have been a key focus of the vaccination programme so far, and just three outbreaks were reported in nursing home settings last week.

19 outbreaks were associated with workplaces, including two in meat / poultry and plants and three within the construction sector.

Among vulnerable groups, meanwhile, 30 outbreaks were reported among Irish Traveller communities, although at least a third of those are older outbreaks.

There were also four outbreaks reported in homeless facilities, although one of those is a 'late outbreak notification' from January.

There was one cluster in a prison, amounting to a total of nine cases.

Revealed: Where coronavirus cases are coming from