British retailer Marks &amp; Spencer is being demoted from a top index on the London Stock Exchan...

British retailer Marks & Spencer is being demoted from a top index on the London Stock Exchange.

M&S is being taken out of the FTSE 100 for the first time since the index was created.

The widely-expected relegation was announced after markets had closed on Wednesday.

It comes after the company was no longer big enough for inclusion in the top tier of listed businesses.

But the official decision will not be implemented until September 23rd.

The FTSE 100 was set up back in 1984 to house the biggest listed companies by market value.

The index is re-shuffled several times a year according to share price movements. 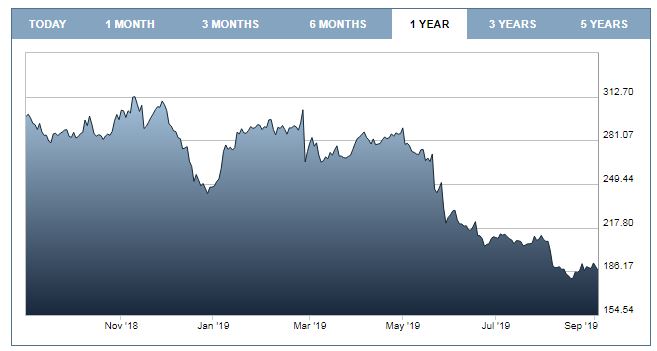 This chart shows the drop in Marks & Spencer value in the past year | Source: London Stock Exchange

The FTSE 100 index also houses a number of Irish firms - including CRH, Smurfit Kappa and DCC.

Figures from earlier this year showed international revenue at M&S dropped by 13.4%.

The results were driven by the closure of stores in loss-making exit markets, and the sale of its business in Hong Kong in December 2017.

Overall, the retailer saw an almost 10% fall in annual pre-tax profits - the third year of declines.

While back in 2016, the retailer announced plans to close 53 wholly-owned stores in 10 different countries, including 10 outlets in China and seven in France.

However no Irish outlets were part of the closures.

And in 2013 it cut 180 Irish jobs across four stores as part of a strategic review.