Students from well off and disadvantaged areas are just as likely to complete college, provided t...

Students from well off and disadvantaged areas are just as likely to complete college, provided they do well in the Leaving Cert.

Research from the Higher Education Authority (HEA) has also found that performance in the Leaving Cert can predict the likelihood of a student finishing third level education.

Almost half of people who got less than 200 points didn’t complete their course.

Completion rates for students who got between 505 and 550 points stood at 95%.

The research also revealed that college completion rates are higher for women (81%) than men (71%).

Students in education or teaching courses are most likely to complete their studies, with 91% finishing their course.

The lowest completion rate, meanwhile, is in computing, with only 55% completing their studies.

Meanwhile, the research also found that 63% of non-completion is accounted for by students leaving during their first year in college.

The study tracked more than 34,000 students who began their higher education in 2007/8.

In total, more than four in five students completed their degrees at Leven 8 Honours Degree level.

That breaks down as 94% in colleges (colleges of education and NCAD), 83% in universities and 74% in institutes of technology. 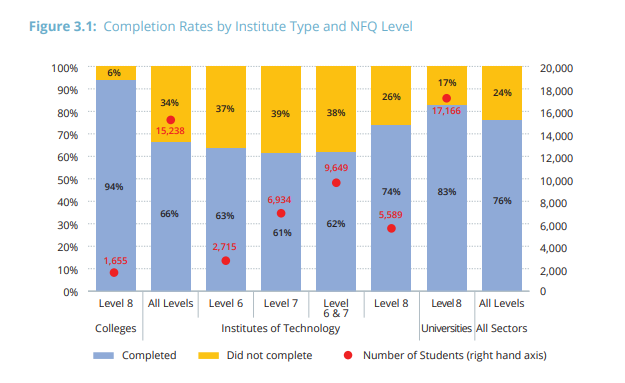 Dr Vivienne Patterson from the HEA said points are a better indicator than background when it comes to predicting drop out rates.

She explained: "The level of education attainment is the main thing.

Paul O’Toole, Chief Executive of the HEA, added that the findings help broaden understanding of how students perform in higher education.

He observed: "The findings are mostly positive but require further consideration to address some of the challenges that the evidence presents.

"In particular, we need to look at non-completion rates by males in certain areas, and the higher education system is seeking ways to improve the outcomes for those students.”

Colleges call for Leaving Cert to be moved to May