The lack of accommodation available to students should be declared an 'emergency' by the Governme...

The lack of accommodation available to students should be declared an 'emergency' by the Government.

That's according to the Union of Students in Ireland (USI), which is holding a protest outside Leinster House calling for urgent action.

Dozens of students have pitched up tents outside the Dáil and are planning to sleep there overnight.

It is estimated around 10,000 students across the country are on waiting lists for student accommodation.

Therese is a second year student at GMIT in Galway. She told The Hard Shoulder she is facing a two and a half hour commute.

"It's been very difficult to try find accommodation in Galway this year especially.

"Other days I'm commuting, so I'm up at 6.30 every morning to make college for 9 - and that's not making it home again until 7.

"And it's hard to find time for assignments or study".

She says most accommodations already have full waiting lists.

"It is a huge chunk out of my day, but it has to be done for the time being until accommodation becomes available.

"The student accommodation is fully booked... and the other accommodations they're fully booked, and they're not taking in any new students for that as they have two many people on the waiting list at the moment.

"And as well for the digs, they're out further - they're in Oranmore and Athenry - so it's even more difficult cause you're still having to commute in and out to college".

USI President Clare Austick says the Government needs to act on this.

"The accommodation crisis is affecting everyone, it's a national issue at the moment, it's not just students - it's everyone.

"And if the Government really want to do something about it, they have to first of all recognise that it's an issue to the extent of which it is at.

"And they need to declare it an emergency and have an effective, long-term sustainable strategy in place to deal with it".

She is calling for a short-term financial commitment in the upcoming budget, to provide capital grants to colleges so they can build their own accommodation.

"We cannot talk about access to education when there are no living spaces for students to stay in".

Clare says Therese's story is all too common, especially this year.

"This is what we're seeing, and this is why the USI has had to protest outside the Dáil today... followed by a sleep-out. 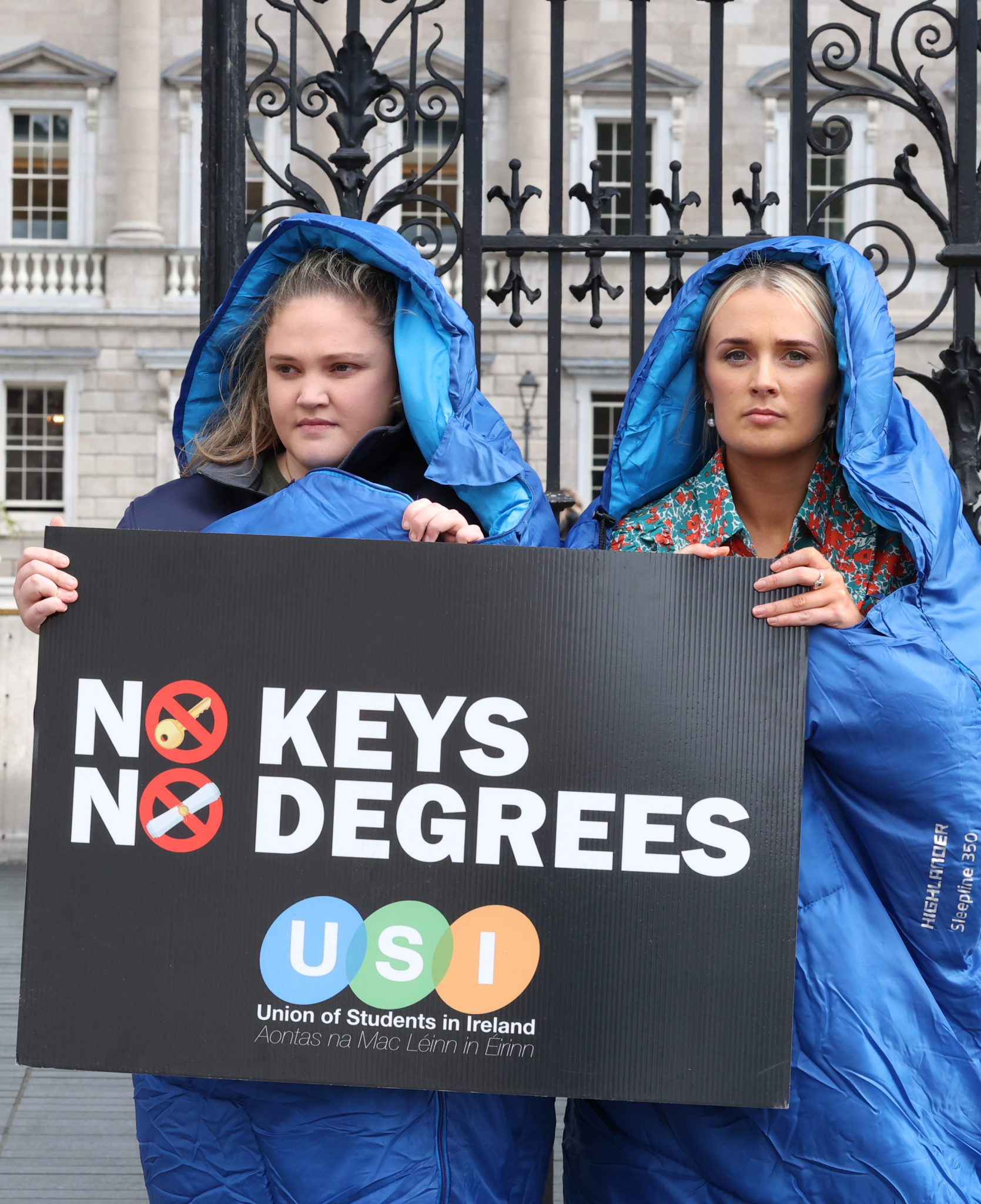 "It's because there are thousands of students who've returned back to college this week, who do not have accommodation, who are priced out of an education, who are looking at staying in hotels and hostels and B&Bs, who are commuting and who are couch-surfing just to access education.

"The thing that we need to remember is that this didn't happen overnight - this is not just as a result of COVID-19, it's been here for the last decade.

"And the Government have failed to act on it, and that's why it's such a severe situation.

"It's worse than ever: it was particularly bad over the last 10 years, but this year in particular after COVID."

Earlier a row erupted in the Dáil, after Sinn Féin said the Government should be ashamed of its record on housing.

It comes amid a severe shortage of student accommodation, with DCU saying it has received four applications for every on-campus bed for this academic year.

Tánaiste Leo Varadkar and Sinn Féin's Pearse Doherty clashed over whether the Government is doing enough.

Main image: Clare Austick (left), President of the Union of Students Ireland, and members of the USI outside Leinster House, Dublin to take part in a protest and sleep out against a lack of accommodation for students. Picture by: Brian Lawless/PA Wire/PA Images

Call for Contribution Fees to be scrapped as students 'really struggling'