Jacinda Ardern has won a second term in office after her rival conceded in New Zealand's general election.

Initial tallies showed Ms Ardern's Labour Party was ahead after her campaign was dominated by her successful handling of the coronavirus crisis.

The 40-year-old leader went head-to-head with Judith Collins of the country's National Party in the election to form the country's 53rd parliament.

It was seen as a referendum on Ms Ardern's three-year term.

Ms Ardern told roaring crowds: "Thank you to the people who worked so hard to share our message. Who volunteered in what felt like an endless campaign.

"But most importantly thank you to the many people who gave us their vote, who trusted us to continue with leading New Zealand's recovery.

"And to those amongst you who may not have supported Labour before - and the results tell me there were a few of you - to you I say thank you.

"We will not take your support for granted. And I can promise you we will be a party that governs for every New Zealander."

Ms Ardern's party was on track to win almost 50% of the vote as results rolled in on Saturday, while the opposition had under 30%.

Ms Collins - a 61-year-old former lawyer - congratulated Ms Ardern on the win, but said the government there would need to do better to navigate the economic wreckage of the coronavirus crisis.

She said: "To Prime Minister Jacinda Ardern, who I have phoned, congratulations on your result. Which has been an outstanding result." 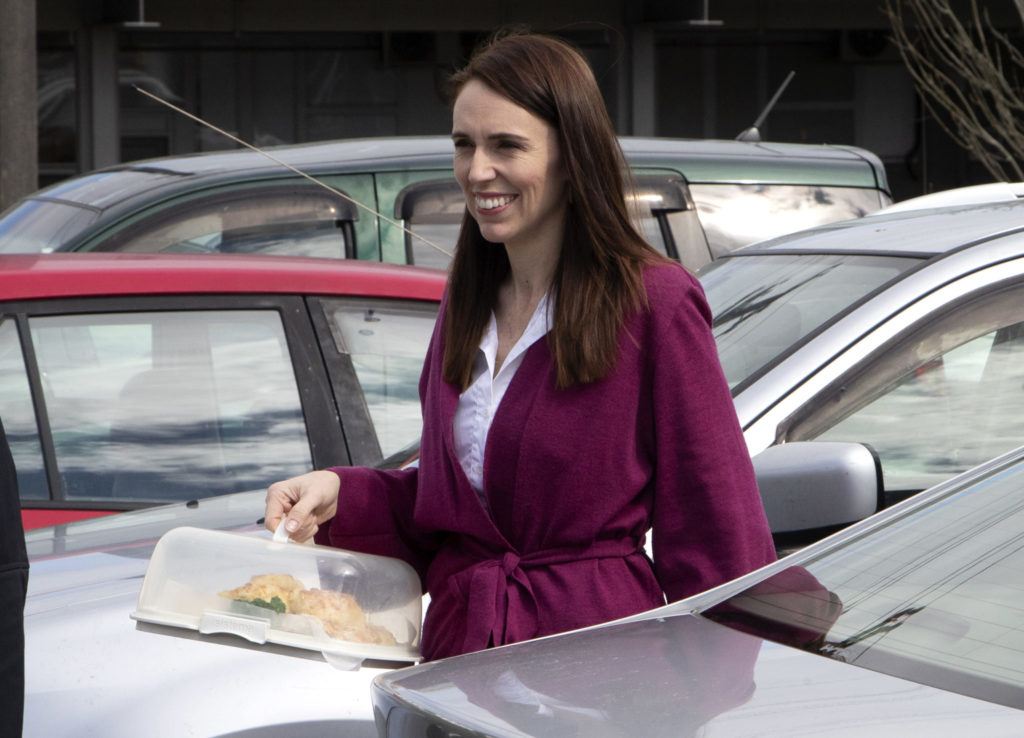 The two weeks leading up to the election saw a record number of voters cast early ballots.

Earlier in the day, Ms Ardern brought homemade cheese scones to campaign volunteers and appeared relaxed as she awaited results.

Ms Ardern - whose government has focused particularly on the New Zealand housing crisis, child poverty and social inequality since coming into power in 2017 - has been cheered on and greeted by crowds trying to get selfies with her on the campaign trail.

"Elections aren't always great at bringing people together but they also don't need to tear one another apart," she said after her win.

"And in times of crisis I believe New Zealand has shown that and for that again, I say thank you."

It comes after her popularity soared earlier this year after she led a successful effort to combat the coronavirus crisis in New Zealand.

There is currently no community spread of COVID-19 in the nation of five million and people are no longer required to wear masks or socially distance.

Labour was seeking a second term on the back of Ms Ardern's success of controlling the virus, however opposition leader Ms Collins argued she was best placed to tackle the financial challenges brought on by the pandemic.

Before the vote, Labour had led by wide margins in opinion polls, with surveys initially suggesting Ms Ardern was on course to be able to form a Labour-only government - which would be the first outright majority government since New Zealand adopted a proportional voting system in 1996.

When just around 100 people had tested positive for COVID-19 in late March, Ms Ardern put New Zealand into a strict lockdown with a motto of "go hard and go early".

She and her health officials shut the borders and outlined an ambitious goal of eliminating the virus entirely rather than just trying to control its spread.

Since New Zealand had the advantage of being an isolated island nation, the strategy worked.

She said: "Tonight's result has been strong. And it is clear that Labour will lead the government for the next three years.

"And over the next three years there is a lot to do. We will build back better from the COVID crisis."

New Zealanders are also voting on referendums to legalise euthanasia and recreational marijuana.

Results on these ballots are expected to be announced on October 30th.

Micheál Martin vows to lead Fianna Fáil into next election