Irish Whatsapp users will be cut off from the instant messaging service unless they agree to a co...

Irish Whatsapp users will be cut off from the instant messaging service unless they agree to a controversial privacy policy update.

Users will face weeks of "persistent" reminders before eventually losing the ability to send messages or make calls.

The update will allow businesses - in particular those on Facebook - to more easily communicate with WhatsApp users.

However, there are concerns it could be a backdoor or first step to data sharing between the two apps.

Facebook has insisted that is not the case, and says WhatsApp's privacy and security will "never change".

Users have been given a soft deadline of May 15th to accept the new terms - although they won't be cut off immediately if they refuse to accept.

Adrian Weckler, the technology correspondent for the Irish Independent, says people will instead be blocked from the app on a phased basis.

He said: "To start with, you'll start to see messages saying that you haven't agreed and you must agree.

"Then it will cut you off from your chat list - you'll still be able to accept messages and take calls."

However, a few weeks later, users who don't agree will have their WhatsApp functionality cut off completely. 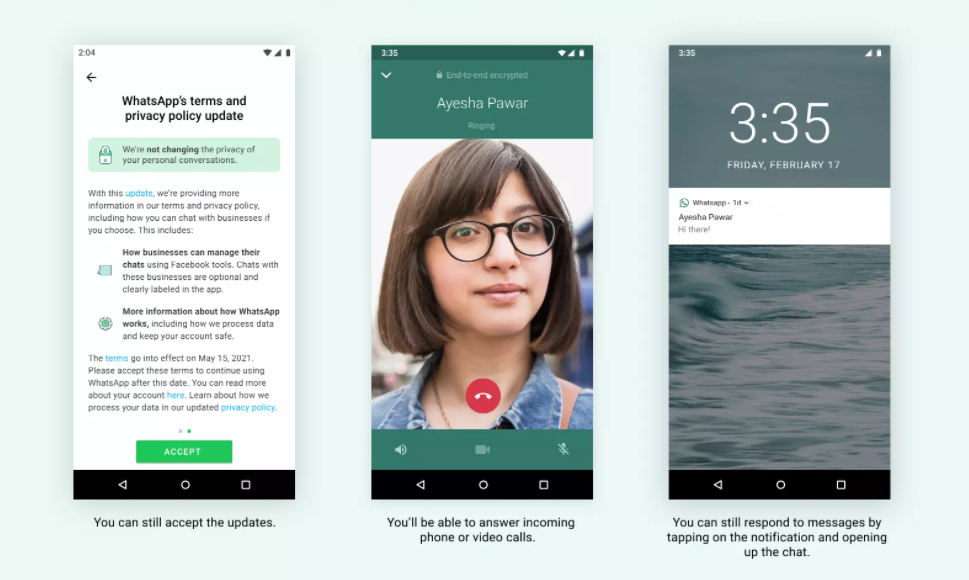 They said: "We're continuing to remind those who haven’t had the chance to do so to review and accept [the new terms].

"After a period of several weeks, the reminder people receive will eventually become persistent."

The new terms have faced opposition from some data regulators in Europe.

Regulators in Hamburg in Germany earlier this week ordered Facebook - whose European operations are based in Ireland - to halt processing personal data from WhatsApp.

The regulator suggested the new terms would mean WhatsApp would have "extensive powers to transfer data to Facebook".

The past year has already seen many people switch to other messaging apps such as Signal, amid changes to WhatsApp's terms of services internationally.

Europe is not impacted by some of the more significant changes, as GDPR rules restrict the sharing of data between Facebook and WhatsApp.