A new US study found the injury rate for e-scooter riders was higher than national rates for riders of motorcycles, bicycles and cars

A Green Party MEP says he welcomes some rules around e-scooters, but warns about regulating them 'out of existence'.

Ciaran Cuffe was speaking as a new US study found the injury rate for riders of e-scooters was higher than the national rates for riders of motorcycles, bicycles cars and pedestrians.

The study examined 1,354 injured people who were treated at 180 outpatient clinics - as well as emergency departments and urgent care centres - from January 2014 to May 2020.

Those injured in e-scooter accidents were not only the vehicles’ riders, but also pedestrians who were hit by moving e-scooters or who tripped over parked ones.

"Prior to the widespread introduction of shareable e-scooters in 2018, there were at most 13 e-scooter injuries per year,” the study's authors write.

"After [the] introduction of shareable e-scooter operators in our region, e-scooter injuries increased to 595 and 672 in 2018 and 2019, respectively."

Mr Cuffe told The Pat Kenny Show a minimum age of 16 would be reasonable.

"I think we absolutely need to regulate e-scooters, but I think it's important that we don't regulate them out of existence.

"On the plus side e-scooters take up a lot less space than a car on the roads, and they have a lower carbon footprint.

"But obviously we have to be careful - yes, the accident rates are higher. But looking at that report, there's 115 accidents per million rides.

"So if you use an e-scooter every day, you'd be injured every 24 years.

"Which isn't that bad; certainly compared to a bicycle where I've had several knocks every few years".

He says people should be wearing helmets when using them - and there should be more safety measures brought in.

"I would encourage people to dress for the mode of transport they're using, I'd encourage the use of a helmet.

"But I think we have to be careful, as I said, that we don't regulate the e-scooters out of existence.

"I think it might be reasonable to only allow those over the age of 16 to ride them.

"I think it would be reasonable to expect that that would have a front and rear light.

"And I think it makes a lot of sense to limit their speed to nothing more than 25 km/h". 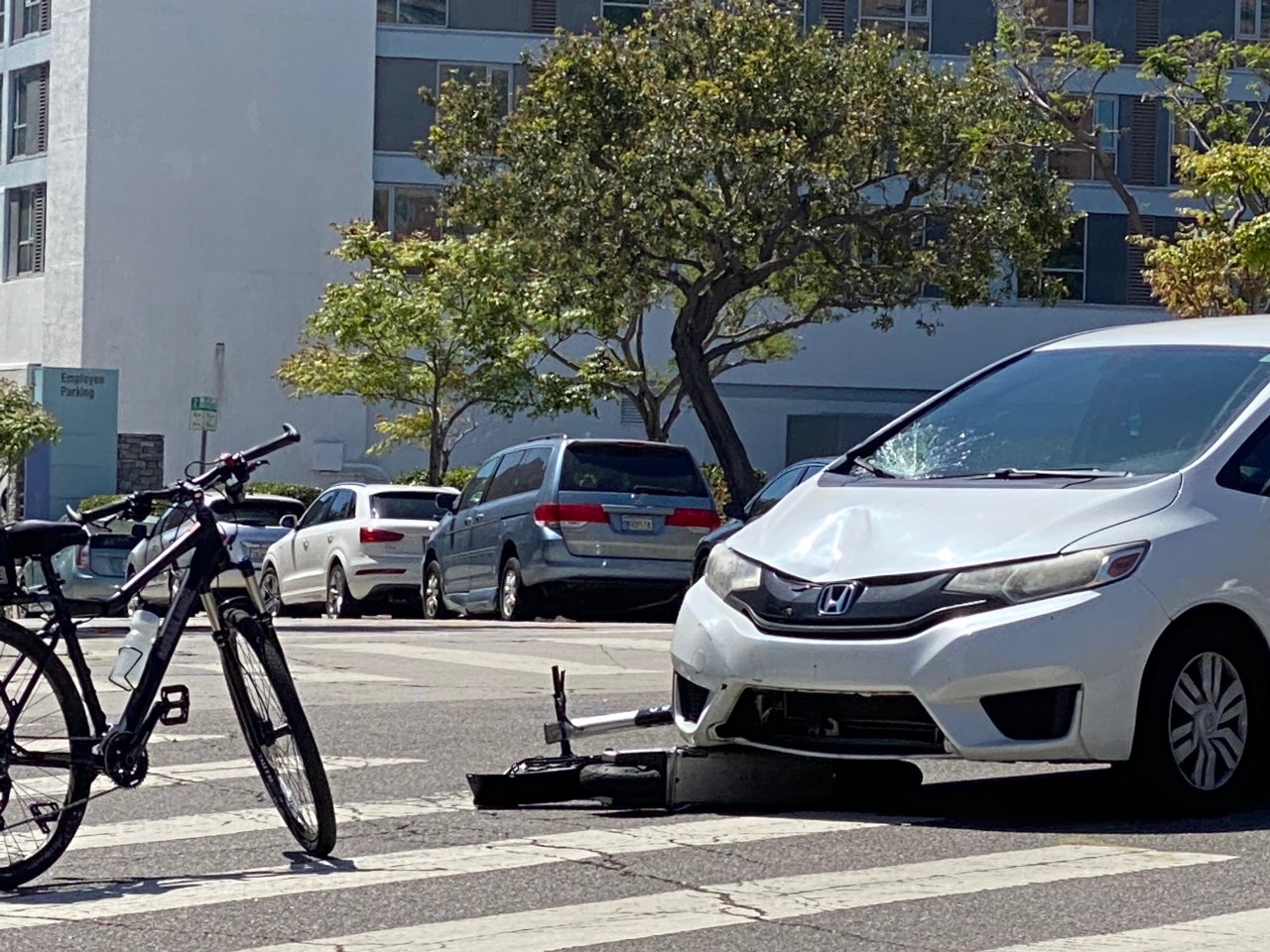 The aftermath of a collision between an e-scooter and a car. Picture by: Dr Joann Elmore/UCLA

Mr Cuffe says new technology could be the answer to dangerous scootering.

"There are technological solutions coming down the line.

"I was looking at new scooter technology which will turn the power off if you cycle on the footpath, it will fine you if you park the scooter inconsiderately in the middle of the footpath, and if you weave between the traffic on the road it will gradually bring your speed down.

"So there's amazing technological ways of encouraging safer riding, and I think they will spread to all e-scooters over the next few years."

But he says suggestions around needing a licence would hurt the mode of transport.

"I think if we insisted on provisional driving licence for e-scooter users, their use would fall off and diminish.

"And that wouldn't be great for reducing traffic on the roads".

Lorna Fitzpatrick is advocacy and engagement manager at the National Council for the Blind.

She says their members are already dealing with incidents.

"Just from research that we've conducted ourselves in NCBI, we found that 77% of our respondents to one of our surveys indicated that they'd already had an incident with an e-scooter on a footpath.

"We do welcome the introduction of the regulations, but we feel that it's abundantly clear to us that there are amendments required to ensure the safety of disabled pedestrians... or those with limited mobility."

She says while she would welcome technology to deal with some issues, these will not be rolled out on private scooters.

"They may, and can, play a significant role for shared schemes - like the Dublin Bikes version of an e-scooter service.

"But it doesn't necessarily address the issue for private use, and it's replacement for safety regulations".

And she says there needs to be a "universal sound solution" for e-scooters to alert people that they are nearby.

Main image: A man is seen on an e-scooter in July 2019. Picture by: Thomas Stockhausen / Alamy Stock Photo