The European Commission says Ireland's real GDP grew at "the brisk pace" of 5.9% over the first t...

The European Commission says Ireland's real GDP grew at "the brisk pace" of 5.9% over the first three quarters of 2019.

It says this was driven by strong private consumption, exports and investment.

"The activities of multinational companies boosted the latter two categories, while very large imports - the counterpart of multinationals' investment – had the opposite effect", it says in its winter 2020 economic forecast.

It also says there was a "marked rebound" in consumer and business sentiment, after the threat of a 'no-deal' Brexit receded.

However domestic investment in equipment "dwindled" as small and medium enterprises reportedly postponed investment due to Brexit uncertainty.

While private consumption is set to remain strong, supported by labour market dynamics.

The unemployment rate stabilised at 4.8% in the last quarter of last year, despite an expansion of the labour force through inward migration.

And it notes that average weekly earnings also rose by 4%, while the rise in the national minimum wage on February 1st "should support the disposable income of poorer households."

It also says investment in construction continued "at a rapid pace" and residential property completions have "surged". 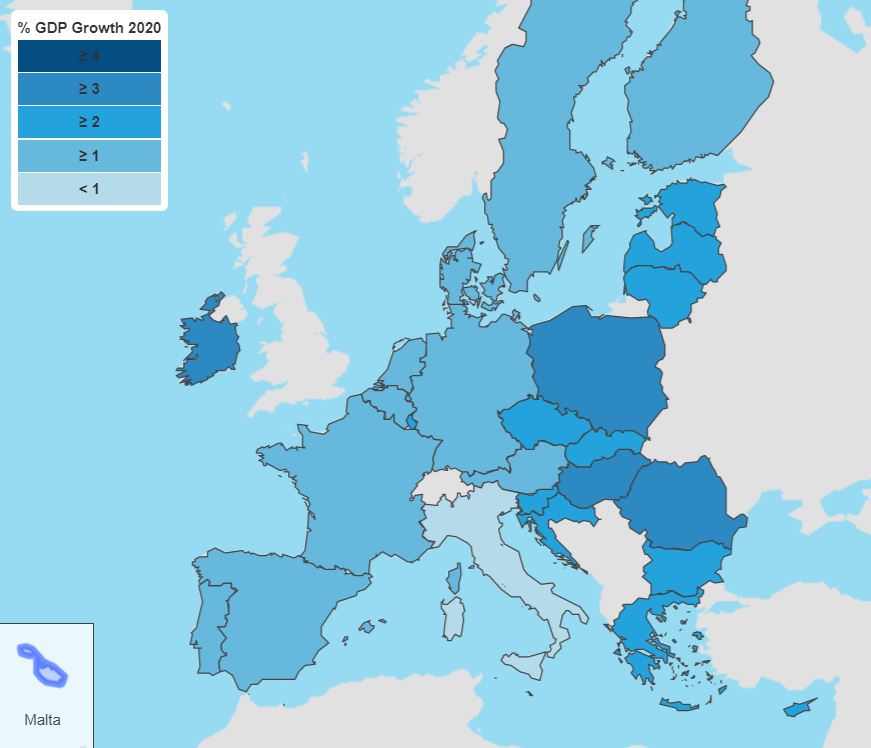 But risks to this forecast include uncertainty surrounding US trade policy and the outbreak of the coronavirus.

It says the outbreak - with its implications for public health, economic activity and trade, especially in China - is a new downside risk.

The commission says the longer it lasts, the higher the likelihood of knock-on effects on economic sentiment and global financing conditions.

It comes after the Central Bank Governor Gabriel Makhlouf also warned about the impact of the coronavirus here.

On Wednesday, he said: "While it is premature to reach any conclusions, there is the potential for a negative shock to the growth of the international economy in the short-term.

"Beyond that, however, we must wait and see, though recognising that uncertainty has increased."

"Any impact on the Irish economy would be felt through both direct and indirect channels.

"As China accounts for a large and growing share of world output - about 19% of world GDP in 2018 - we would expect a disruption to China's economy to have an impact on Ireland."

The winter forecast is based on a technical assumption of status quo, in terms of trading relations between the EU and the UK.