An Irish man who received a heart transplant nearly 30 years ago says staff at the Mater Hospital have saved his life twice.

In 1993, at just 11 years old, Patrick Barry became the youngest person in Ireland to get a heart transplant.

Over 27 years later, he's now raising money for the Mater Hospital for their '100 Miles In A Month' challenge for February

Speaking on today's Pat Kenny Show, he explained why he wants to give something back.

Patrick received his transplant back in the early stages of the transplant programme - a time when there was still uncertainty around such major surgery.

Despite having had a healthy childhood, Patrick found himself in need of the life-changing surgery when he caught a virus - a viral cardiomyopathy.

"Eventually I got so sick I was brought to Our Lady’s… they did an x-ray, and my heart was literally swallowed up to twice the size it was meant to be.

"I was very, very lucky. I think youth was on my side - I was only 11, and too sick to go over to Great Ormond Street.”

Patrick remembers the 'traumatic' experience well, including arriving in the Mater hospital for the surgery.

He recalled: "I remember slowly getting weaker and weaker… at the end I was just on a drip. I couldn’t eat… I was bed-ridden, and down to four stone.

“My father was crying… I turned around to my father and said ‘I don’t know what you’re crying for, I’m the one going in for the operation’.

“I really have to thank the family and donor who donated the heart - such a selfless act to do, and it saved my life. All I can do is thank them so much. I’m eternally grateful… I think about the donor every day.”

Patrick praised the work of surgeons Freddie Woods and Jim McCarthy, and the 'second to none' care he received from all the staff at the hospital.

He said Professor Woods would often bring football magazines to him, and sit down by his hospital bed to chat with him during the recovery.

Patrick recalled: “Can you imagine the top heart surgeon in Ireland… how busy that man was… and after work every day he’d come and sit there for an hour with me.

"It really got me through… the team in the Mater… everybody pulled together.”

'I was nursed back to life' 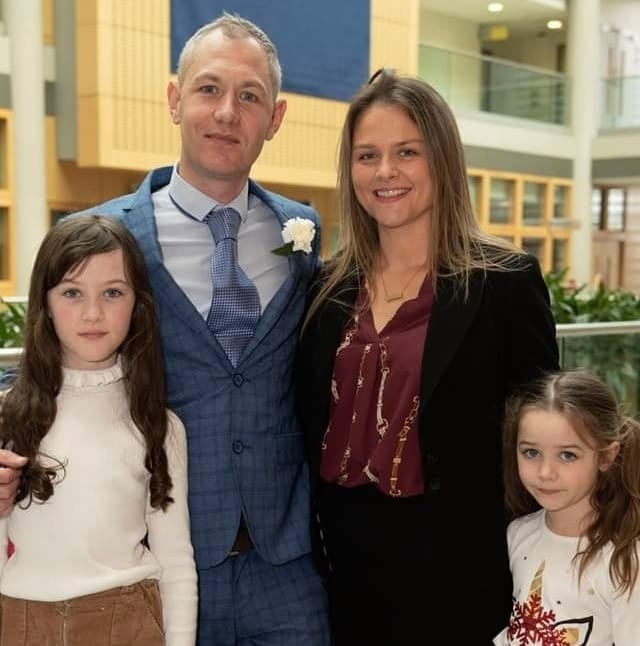 Patrick with his wife Amanda and daughters Lucy and Emily

While there were a few rejection issues over the first few years, Patrick has been lucky to live a normal life.

He married his wife Amanda five years ago, and they have two young daughters Lucy and Emily.

While Patrick has avoided major setbacks, there was one big scare two years ago.

On the third anniversary of the wedding, the family travelled to the Gleneagle Hotel in Killarney, Co Kerry.

Patrick recalled: “I walked out to reception after breakfast that morning. I had a cardiac arrest and dropped dead on the ground.

“This is how lucky I was: there was a defibrillator six feet from where I was, and an off-duty nurse in the breakfast room.

“One of the managers Geraldine took over CPR… my two young girls and wife were there witnessing this.”

He was brought to Tralee hospital, before being transferred back up to the Mater.

He woke up a few days later in the ICU of the Dublin hospital - and he credits the hospital staff with helping save his life for a second time.

He told Pat: “The care they give you there is second to none… I was nursed back to life.

“It’s only as you get older you realise what the Mater done for you… if I can give back any way I can.

"That’s why I’m doing the 100 miles, and raising awareness of organ awareness. It makes such a difference."

You can find full details of the fundraising effort on the Mater Foundation website.

Main image: Patrick Barry and his daughters Lucy and Emily