The property market is already rebounding after a COVID-19 'wobble' in April. That is according t...

The property market is already rebounding after a COVID-19 'wobble' in April.

That is according to the author of a new Daft.ie housing market report.

Ronan Lyons told Newstalk Breakfast: "It's hard to say that we're out the other side yet, but as we can see things now - as of the start of July - it certainly had an impact, a wobble, in April.

"The overall trends for house prices has been moving from inflation of say 5% or 6% a couple of years ago, more or less stable this time last year and then slightly falling as we entered the year.

"Then there was a big wobble in April when the market didn't know what to do.

"But... the number of homes put up on the market in June is almost back to normal levels - so the sales market has recovered quite a bit. 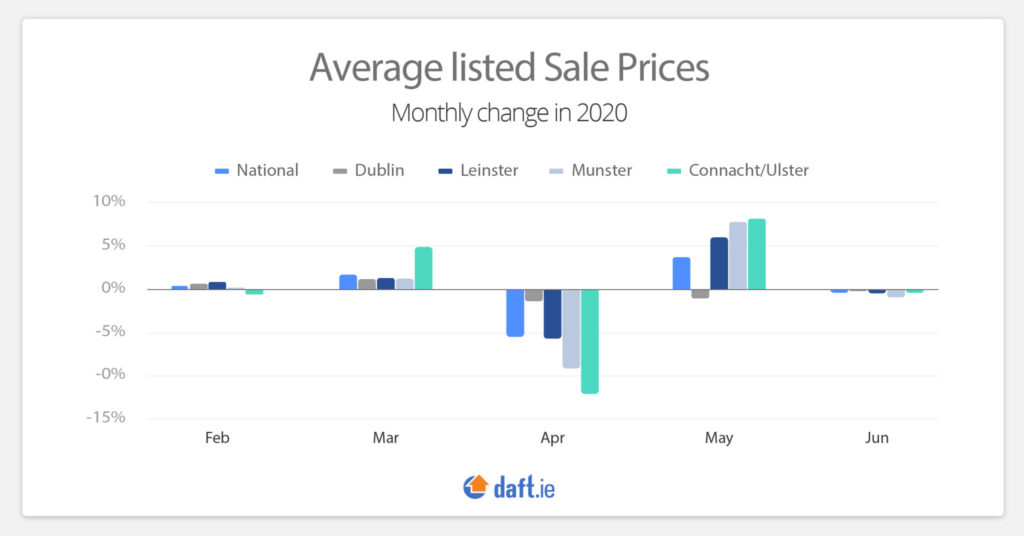 "It looks like the trend that was there has returned, of course that's not to say that things won't be different if there's a second or third wave.

"It is definitely a confidence issue.

"People are seeing something like a return to normality in their day-to-day lives, not everyone, but a significant number - and that has given people the confidence to put properties back on the market to go out and view again.

"But that's a fragile equilibrium at the moment, I think".

And he said one underlying issue still remains.

"As of February or early March, this was a country that was hugely under-stocked with housing - and in particular a diversity of housing.

"We are moving from larger and more rural households, and we're moving towards a situation where we have smaller households - one and two persons - and in and around the cities.

The report shows sale prices fell by an average of 3.3% in the year to June.

It also shows a 0.2% rise in rents nationwide in the year to June.

The average listed sale price nationwide in June was €253,868, while the average monthly listed rent was €1,402.

Most parts of the country show similar trends, with a modest annual fall in sale prices - ranging from 2.9% in Leinster to 4.9% in Munster - and largely stable rents.

In Dublin, rents rose by 0.5% year-on-year, while in Leinster outside Dublin they rose by 1.2%.

In Connacht and Ulster, however, rents are down 2% year-on-year - while sale prices are up modestly on average by 0.7%.

Daft says figures for the number of properties posted for sale or to rent indicate "a sharp recovery" in June, compared to April and May.

There were over 5,200 properties listed for sale in June, compared to roughly 2,000 in both April and May.

Whereas those two months had seen activity collapse by three-quarters, the number of homes advertised in June was just 15% lower than in the same month in 2019.

In the rental segment, there were 38% more homes advertised to rent in June 2020 than a year previously  - with Dublin driving this trend.

Main image: For sale signs by O'Connor and Shannon and Sherry Fitzgerald outside houses in Harolds Cross in Dublin. Picture by: Sam Boal/Rollingnews.ie