People in Belfast and Scotland tested for symptoms associated with coronavirus

Five people in Scotland are being tested for coronavirus, with a sixth being screened in Belfast ...

People in Belfast and Scotland tested for symptoms associated with coronavirus

Five people in Scotland are being tested for coronavirus, with a sixth being screened in Belfast - but no cases have been confirmed so far.

It's believed a person is being treated at the Royal Victoria Infirmary in Belfast for symptoms which may or may not be associated with coronavirus.

The patient is being looked at as a precautionary measure, with tests to rule out the coronavirus expected to take several days.

The head of infection medicine at the University of Edinburgh earlier confirmed that possible cases in Scotland were being investigated - but no cases have been confirmed so far.

Professor Jurgen Haas has said he believes there will be many more cases from other cities in the UK.

He said three cases are in Edinburgh and the other is believed to be in Glasgow.

Tests are currently being carried out and none of the patients have been confirmed as having the disease.

They all travelled to Scotland from Wuhan, where the outbreak is thought to have originated, within the past two weeks and are showing symptoms of respiratory trouble - a red flag for the virus.

The coronavirus outbreak has so far killed 17 people and infected nearly 600.

Prof Haas said: "We have currently three cases suspected Wuhan coronavirus in Edinburgh and as far as I understand one case in Glasgow.

"The situation will be pretty similar in pretty much all UK cities with a large number of Chinese students.

"It's not too surprising. My suspicious is that there will probably be many more cases in many other cities in the UK.

"None of the cases I know of have been confirmed."

Prof Haas said there is only one laboratory testing for the virus, operated by Public Health England (PHE).

He added that the cases have been flagged up through the PHE infection guidelines as they travelled to Wuhan within the last 14 days and are showing signs of respiratory symptoms.

More than 570 cases of coronavirus have been confirmed in China, while other cases have been reported in the US, Japan, South Korea, Thailand, Singapore and Hong Kong.

However, the World Health Organisation's emergency committee has said it is "too early" to declare an international public health emergency over the coronavirus outbreak.

The Chinese government has effectively locked down Wuhan, cancelling planes and trains there and in the nearby city of Huanggang.

The city of Wuhan, considered the epicentre of the coronavirus outbreak, is in lockdown.

And residents in Huanggang, 45 miles away, have also been told not to leave the city other than under special circumstances. 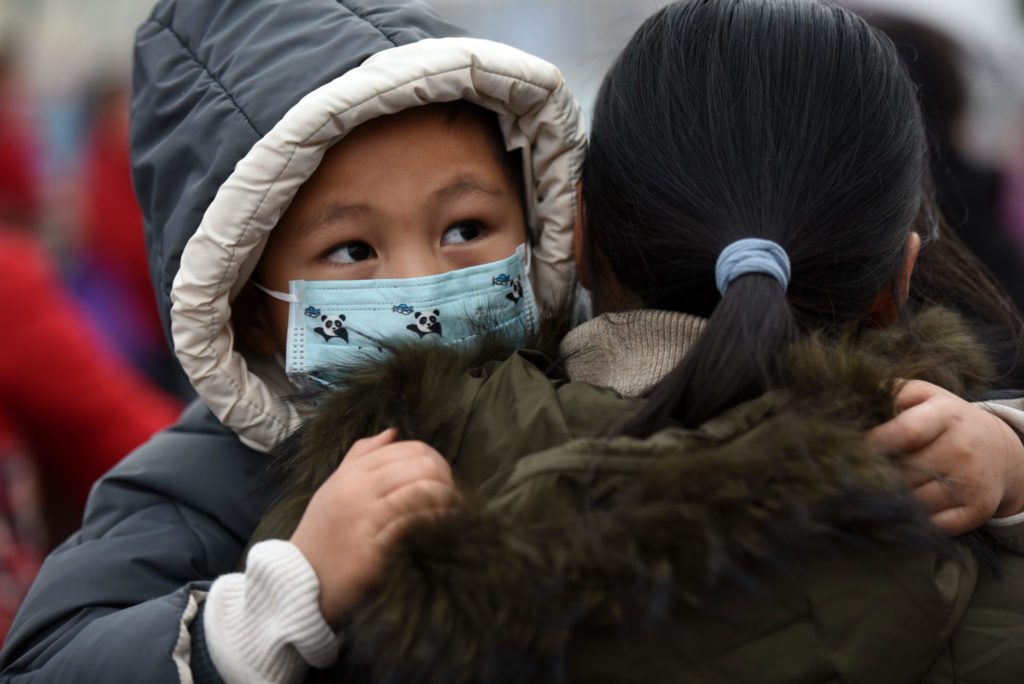 A young child wearing a face mask is held by his mother on the street in Huai'an City, east China's Jiangsu Province | Image: Costfoto/SIPA USA/PA Images

The World Health Organisation (WHO) is considering whether to declare a global health emergency over the outbreak, as millions of people in China prepare to travel domestically and abroad for its lunar New Year celebrations this weekend.

In Wuhan, all transport networks - including rail, bus, underground, ferries and outgoing flights - have been suspended, and its 11 million residents have been ordered to wear masks in public places and at work.

As the roads outside the city were shutdown, images showed drivers stocking up on fuel and empty shelves in supermarkets as households hoarded supplies for what could be weeks of relative isolation.

Similar measures are being enforced in Huanggang, which has a population of six million. Bus and train services have been suspended and entertainment venues including cinemas and internet cafes told to shut.

Nearby Ezhou has shut its train stations, and the Chinese capital Beijing has cancelled major public events including two New Year temple fairs, as part of the action to control the outbreak.

Overnight, the Chinese government released a breakdown of the details of the 17 people known to have been killed by the deadly virus.

All but two of the 13 men and four women were aged over 60. Ten of the victims had a pre-existing condition.

There is no vaccine for the new viral infection, which can cause pneumonia and can be passed from person to person.

The symptoms include fever, coughing and difficulty breathing.

Though the origin of the virus has yet to be identified, the WHO has said the primary source is probably an animal.

Meanwhile a decontamination exercise was carried out at Dublin's Mater Hospital on Tuesday after a woman presented with a suspected case of the Chinese coronavirus.

The woman had recently returned from China and the exercise was carried out after she presented with a fever.