The Environmental Protection Agency (EPA) says the equivalent of four Olympic-size swimming pools worth of raw sewage is going into Irish rivers and lakes every day.

A new report has revealed raw sewage from 35 towns and villages flows into the environment on a daily basis.

It says 33 areas are unlikely to receive treatment until after 2021.

While treatment at 19 of Ireland's 172 large towns and cities - including Dublin and Cork - failed to meet standards set to prevent pollution.

This is down, however, from 28 over the past two years.

The 2019 Urban Waste Water Treatment report also found 48 areas where waste water is the main significant threat to inland and coastal waters at risk of pollution - down from 57 areas the previous year.

There were also 13 areas in Cork, Kerry and Laois where improvements are needed to protect globally endangered freshwater pearl mussels.

And it identified seven large urban areas where waste water collection systems - or sewers - were ruled inadequate by the European Court of Justice. 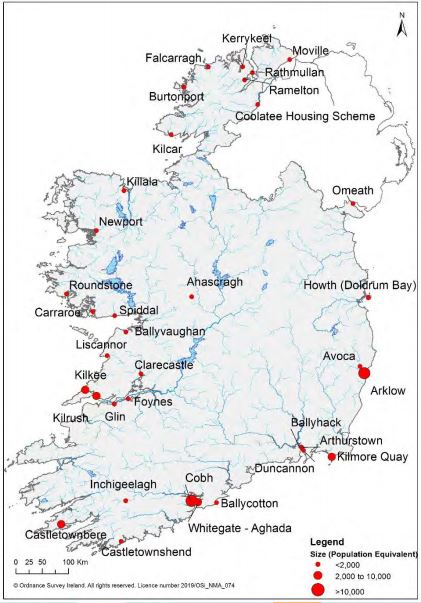 When a collection system is inadequate, it cannot retain all waste water and convey it for treatment.

The beaches are Clifden and Ballyloughane in Galway, and Merrion Strand in Dublin.

The EPA has also criticised Irish Water, saying the utility has 'no clear plan' to improve treatment at 23 areas where waste water is a 'significant threat' to waters.

Overall, there are 113 areas where priority action is needed to protect public health and the environment.

"What we literally mean here is when you flush your toilet in some of these areas, the raw sewage is going out without treatment."

"There is a health risk here for people: if you come into contact with inadequately treated sewage, it contains harmful bugs such as bacteria and viruses and people can become ill with such things as stomach upset, sore throat, gastroenteritis.

"And also you've the risks on the environmental quality side of things - once it gets into the water, what you see in the rivers is, it reduces the oxygen levels in our waterways.

"It also increases the algae that you don't want to see growing in these waters, and it affects the aquatic life of the rivers".

He said delays in Irish Water's plans are prolonging the risks.

"We need Irish Water to address the underlying cause of delays, put concrete plans in place for the priority areas that have been identified by the EPA and deliver on them".

He added that 16 prosecutions have been taken to date, with two others before the courts.

Main image: This 2019 file photo shows a Dublin beach shut down to swimmers following a wastewater overflow at the city's treatment plant in Ringsend. Picture by: Sam Boal/Rollingnews.ie