A five-year-old girl who fled to Ireland from Ukraine with her mother was a special guest in the Dáil chamber.

A five-year-old girl who fled to Ireland from Ukraine with her mother was a special guest in the Dáil chamber for Volodymr Zelenskyy’s address today.

President Zelenskyy received a standing ovation at Leinster House this morning after delivering his speech to both houses of the Oireachtas.

He used the opportunity to thank the people of Ireland for their support since the Russian invasion began and to welcome a “new age of understanding” between the two countries.

His address was followed by speeches from Government party leaders as well as the leaders of the opposition.

Chair of the Seanad Mark Daly welcomes 5 year old Anastasia to the Dáil chamber. She’s here for the Zelensky address with her mother having fled Ukraine.

Her father is fighting the Russians at home pic.twitter.com/GVBQE4KD3E

During his own speech, the leader of Seanad Senator Mark Daly welcomed five-year-old Anastasiia to the chamber.

He said she fled to Ireland with her mother, while her father fights the Russian invasion back home.

“On behalf of Seanad Éireann, I would ask all of you to join with me in welcoming five-year-old Anastasiia to the Parliament of our republic,” he said. 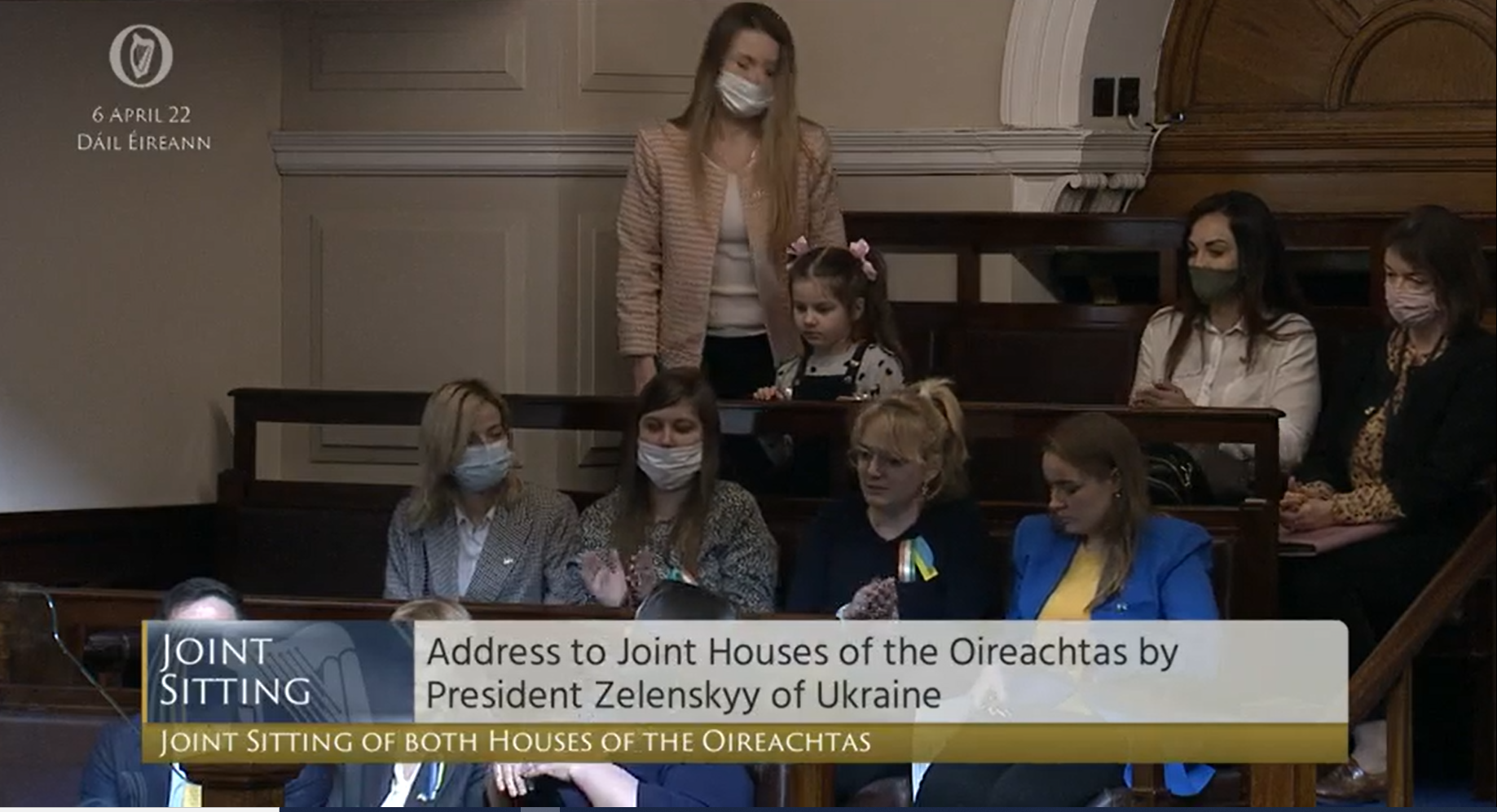 Five-year-old Anastasia with her mother Yana in the Dáil chamber. Image: Oireachtas

“Anastasiia is here with her mother Yana. Her husband - Anastasiia’s dad - like thousands of others, is in a defence unit in Ukraine fighting to keep it free for his daughter’s future.

“They have travelled 4,000km here from Kyiv to Dublin. Having to leave their home under Russian artillery fire, we cannot imagine what they have gone through.

“We cannot imagine what it must feel like - like million of their fellow Ukrainians - having to seek safety in European n countries.

“We cannot imagine what it must feel like to have your future so suddenly changed.

“Anastasiia and Yana we welcome you here along with your ambassador and the other refugees who join us here today.”

Senator Daly noted that, “as we sit here in Dublin bombs and missiles are descending on those who remain” in Ukraine.

“Their fellow citizens, their families, their friends their neighbours – innocent Ukrainian men, women and children.

“In recent days there is evidence of war crimes in Bucha that has been shown to the world. What we are facing is a regime that is being led by a war criminal and he must face justice like any other war criminal.”

He recalled the words of US President John F. Kennedy to the Dáil in 1963, when he stated that Ireland “is not neutral between liberty and tyranny and never will be”.

“That is as true today as it was over half a century ago,” he said.

“As an international community we must not be neutral in the face of tyranny.”

The Fianna Fáil senator noted that we can and must do more for Ukraine, adding: “we must be relentless in our support for Ukraine. Not just today; not just tomorrow but until the war is won.”