The gender of the baby, who was born on April 30th, is still unknown

The park announced the birth of the Linné's two-toed sloth on Wednesday.

The gender of the baby, who was born on April 30th, is still unknown.

They were born to mother Talyta and father Matheo, after a gestation of six months.

The park is calling on the public to help name the baby sloth via its blog.

Matheo, who is four and a half years old, was transferred from Wilhelma Zoo in Germany to Fota in 2019.

While mother Talyta, who is three-years-old, came to the park from Papiliorama Swiss Tropical Gardens in November 2020.

Lead ranger Julien Fonteneau says it'll be a few weeks before the baby will leave its mother.

"Not only does the Wildlife Park have great success breeding the fastest land animal and the tallest land animal in the world, and now also with the world's slowest moving animal - the sloth.

"Due to the nocturnal nature of the sloth, getting a glimpse of the baby can be elusive.

"Young sloths will cling to their mother's belly for approximately five weeks until they have the strength to move on their own.

"The little one is already pulling at leaves and other foods we give to the adults, although not leaving the mother's safety on its own yet." 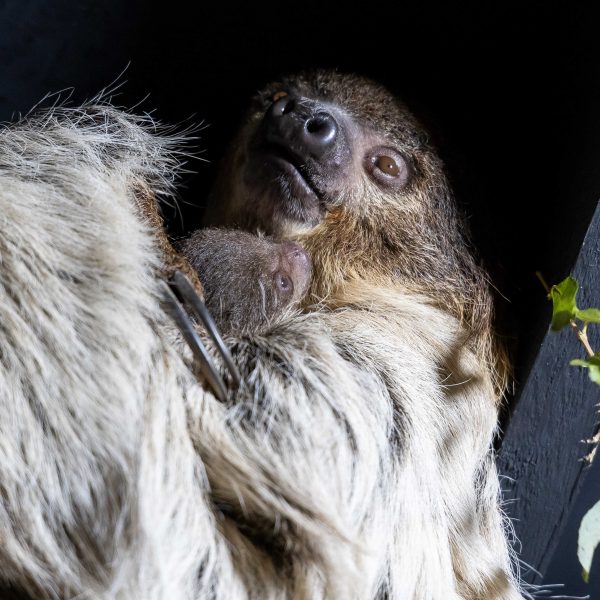 Sloths are native to South America and eat, sleep, mate, and give birth from their upside-down position high among the branches.

They are the only mammals whose hair grows in the opposite direction from the hair of other mammals.

To accommodate their upside-down lifestyle, the hair parts in the middle of the belly and grows upward towards the back.

The hair on the face points upward, allowing water to run off during rainstorms.

The only time sloths go down to the forest floor is to go to the toilet, which they do about once a week.

Their diet is mostly made up of various leaves, stems, buds, and a selection of fruit - but insects are also consumed.

This type of diet requires a specialised digestive system and sloths possess a large, four-chambered stomach like cows.

But due to the low nutritional value of their leafy diet, sloths are slow to exert themselves unless necessary.

Predators such as jaguar, ocelots, harpy eagles and anacondas pose a threat to sloths in their native habitats.