There has been a drop in support for Fine Gael in the latest opinion poll. The Sunday Times/Behav...

There has been a drop in support for Fine Gael in the latest opinion poll.

The Sunday Times/Behaviour & Attitudes poll shows the popularity of the party has fallen by five points to 23%.

While Fianna Fáil has seen no change and remains on 28%.

Sinn Féin is on 12%, down seven, while The Green Party has gained support by six to 11%.

The Labour Party is up one point to 5%, and Independents and Others are also up four to 13%.

Satisfaction with the Government has dropped four points to 34%. 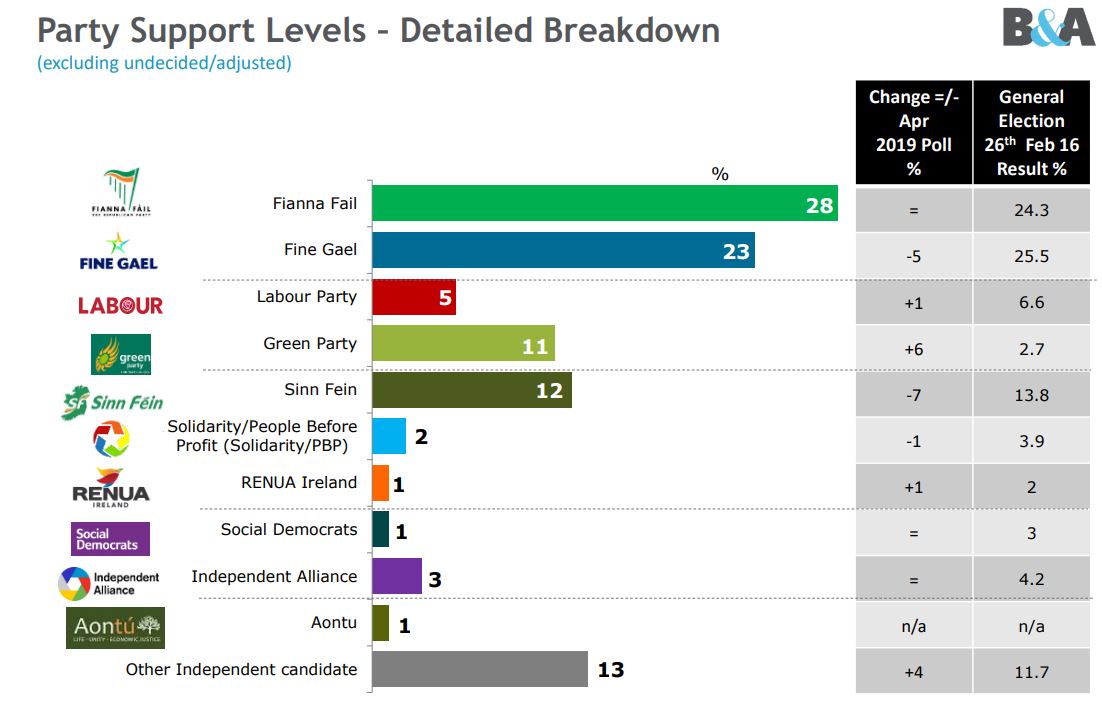 While satisfaction with the main party leaders has seen a drop for all - except one.

Leo Varadkar's satisfaction rating is at 39% (down three), Micheál Martin's at 46% (down two) and Mary Lou McDonald fell seven places to a rating of 32%.

The only main party leader to increase his satisfaction rating was Labour's Brendan Howlin - up one on 39%.

The results are based upon a representative sample of 900 Irish voters with a margin of error of 3.3%.

The poll was conducted on an in-home, face-to-face basis between May 31st to June 11th.

Sunday Times political editor Stephen O'Brien said this comes on the back of the recent elections.

"So they are in the middle of a soul-searching process".

"Perhaps the most interesting number in this poll is that The Green Party is up six points to 11% from the finding in The Sunday Times poll of last month.

"In the local elections, The Greens got 5.5% - and this is certainly a huge advance on that.

"They've enjoyed a lot of media coverage on the back of winning two European seats".