Ukrainians are increasingly worried that Putin will use chemical weapons as his military fails to...

Ukrainians are increasingly worried that Putin will use chemical weapons as his military fails to make the swift progress he anticipated.

Russia signed up to the 1997 Chemical Weapons Convention which bans their use or development. However, Putin used them in the Second Chechen War in 2002 and more recently while fighting alongside the Assad regime in Syria.

In December last year, Russia’s Minister for Defence falsely claimed there were US mercenaries in the Donbas region with "tanks of chemicals to commit provocations". The allegations have led British and US intelligence officials to speculate that Russia will soon launch a chemical weapons attack on Ukraine.

“They [the Russians] have backed Syrian forces in the war there, over 10 years, where Syrian forces used chemical weapons there on their own people,” the BBC’s Kyiv correspondent James Waterhouse explained to The Hard Shoulder.

“It was seen as a red line by the west that had been crossed but infamously the US never acted on that red line being crossed.

“So yes, it is a real concern on  top of the misery and horror that people are experiencing.”

In 2018 the BBC concluded that there had been at least 106 chemical weapons attacks in Syria since 2013. One Syrian described their use as “terrifying”:

"A barrel bomb or a rocket kills people instantly without them feeling it... but the chemicals suffocate,” Abu Jaafar said.

“It's a slow death, like drowning someone, depriving them of oxygen. It's horrifying."

Russian losses are thought to be much higher than the Kremlin anticipated and Mr Waterhouse believes this could provoke an angry and frustrated Putin:

“One wonders, what the out is here,” he speculated.

“The only possible avenue is the continued frustration of the Russian advance, the losses they are sustaining, the poor planning as far as western officials are concerned that has been brought in.

“But equally that causes worry as what will Russia resort to?

“Because we talk about cities being under siege a lot, don’t we? The reason for that is the level of resistance they are being met with at the cities’ outskirts. So they are resorting to what they’ve done over and over [again]; surround a city, cut off its supply route, bombard it into submission.” 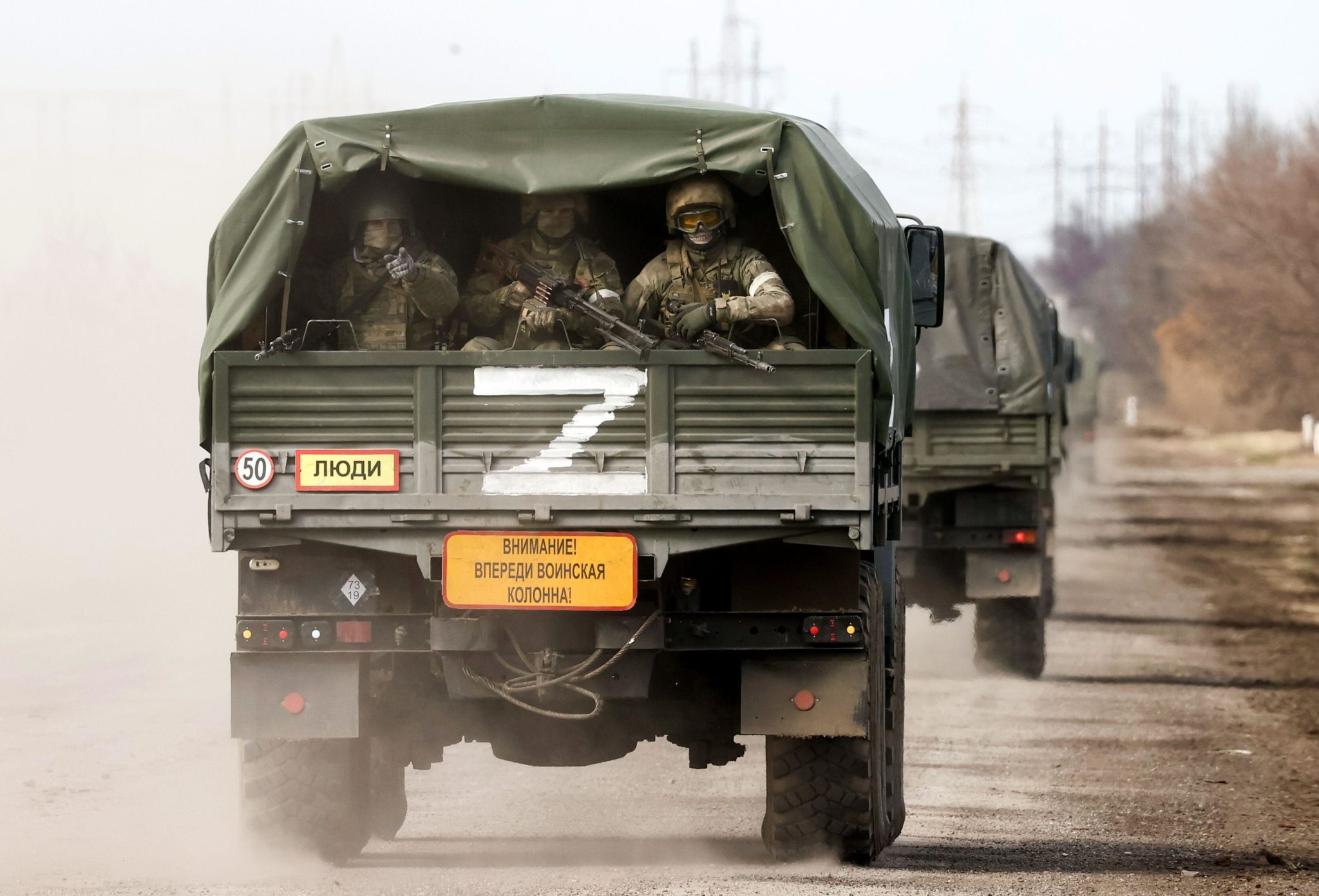 2HPYM3W Crimea, Russia. 24th Feb, 2022. A column of army trucks approaches the Perekop checkpoint on the Ukrainian border. Early on February 24, President Putin announced a special military operation to be conducted by the Russian Armed Forces in response to appeals for help from the leaders of the Donetsk and Lugansk People's Republics. Credit: Sergei Malgavko/TASS/Alamy Live News

Yesterday Justin Bronk, a Research Fellow for Airpower and Technology in the Military Sciences team at Royal United Services Institute, warned Newstalk that he expected the Russians would try and starve Ukrainians into surrender:

“This is unfortunately the Russian playbook and they’ve had a lot of experience with grinding urban sieges in Syria alongside the Assad Government in places like Aleppo and Homs.

“And so the playbook is pretty well known. I think it will just be repeated in more and more places.

“Encircle the cities, besiege them, bombard them, make life unliveable inside so that the civilians have to try and flee however they can.

“And then basically starve them out because they don’t have the manpower to take the cities street by street.”