A former member of the Church of Scientology has claimed the organisation uses a 'divide and conq...

A former member of the Church of Scientology has claimed the organisation uses a 'divide and conquer' approach to towns.

It comes as a drug rehabilitation centre, run by the controversial church, is being built in Co Meath.

Earlier this year the High Court quashed An Bord Pleanála's decision over the facility in Ballivor.

The planning decision was issued in November 2018 over the Narconon centre.

The board found that the change of use from a nursing home development to a residential drug rehabilitation facility was not exempted development.

The 56-bed facility is being built on the site of a former national school.

The organisation's Irish website describes Narconon as a "church-sponsored drug rehabilitation programme that helps addicts escape the dangerous cycles of drug abuse", adding that it "utilises drug withdrawal techniques that focus on an intense detoxification process rather than other drugs".

However, the methods used at similar centres for drug rehabilitation in other countries are widely disputed. 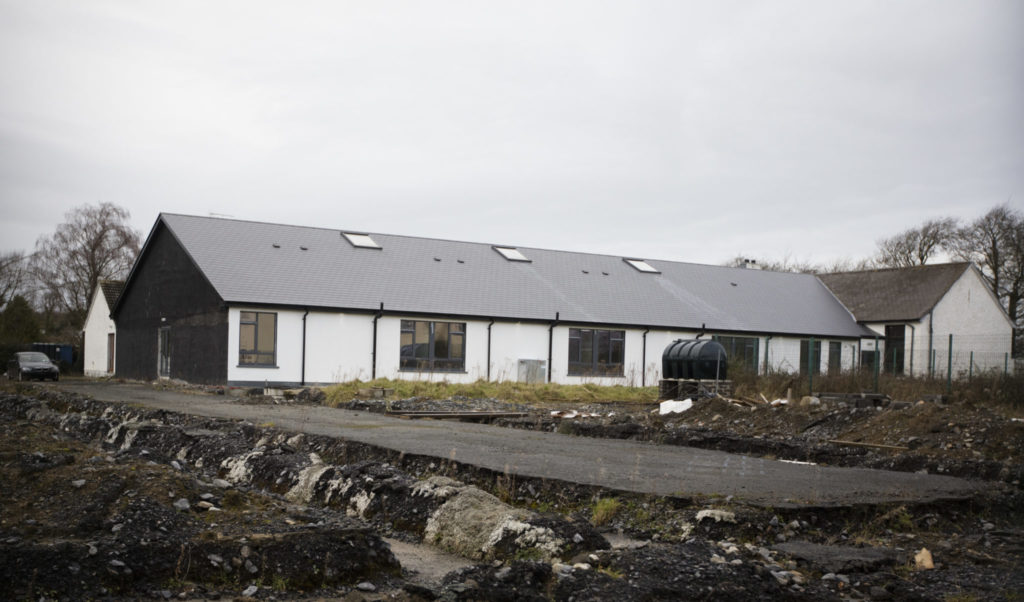 A 2018 photo of a former national school in Ballivor, Co Meath where a new Scientology religious centre is proposed | Image: Eamonn Farrell/RollingNews.ie

'Be weary of strangers bearing gifts'

He told Henry McKean for The Hard Shoulder that they are using different names for their front groups.

"They would use 'love bombing', so they would approach business and clubs [and] offer to donate sizably to their clubs or societies.

"They approached the GAA club which resulted in the GAA accepting €20,000 in donations from Scientology.

"This results in a divide and conquer scenario within the town, where the townspeople are turning against each other: because some are willing to take the donation, and some use the old wisdom of being weary of strangers bearing gifts.

"This often happens when Scientology are concerned.

"People turn on each other and this distracts the people from protesting the group and getting them out of their vicinity.

"They permeate the town like that and create division".

He also said one of their groups has "managed to get into Irish primary schools" to talk to young people.

Pete Giffiths, who got out of Scientology in the UK, said: "Scientology claims that Narconon is a drug habilitation programme, but the actual steps of that programme are no different to Scientology training.

"It's actually the very same stuff.

"You do a communication course, you do a purification rundown, but you're doing Scientology: it is no different at all", he claimed.

"Unfortunately Narconon isn't successful, it causes more problems than it relieves shall we say.

"In the United States there's been well over a dozen deaths in the last 10 years - and it's dangerous and expensive, let's not forget that.

"In Ireland, most people with drug problems have been pretty poor and can't afford it.

"If you've got a rich family, your rich family might well decide that it's worth taking a chance.

"My advice is don't bother - just stay away, it is not good, it is dangerous and it could ultimately cost your life".

'Everyone is entitled to help'

Some residents in the village are open to the idea of the centre, but there has been an ongoing campaign to keep it shut.

One woman said: "Everyone is entitled to help, regardless of who they are, whether they're rich or poor.

"I think if you're a Christian then follow your Christian faith, it should not worry you".

Another woman said she was not concerned: "I don't mind it like... I was only asking there a while back and I was out walking the dog and I was asking what's the story, was it opened - and they told me it might be next year".

Sue Davis said she is not a supporter of the centre.

"I kind of was a little but surprised because of the type of drug rehabilitation it is.

"I don't think it'll be a plus in the village because it doesn't bring employment to the village, it's just not good for the village.

"Some of the concerns would be that they actually go into saunas for hours on end, and we know people that are ex-Narconon - they would have been Scientology or whatever.

"They would have been in for a lot of years, and they said the saunas and all that is crazy what it does to their body, and the cold turkey that they feel they they're going through".

In response Diana Stahl, director of public affairs at the Church of Scientology Ireland, told Newstalk: "Narconon centres operate successfully in 20 countries around the world and are set up to comply with the highest health and safety standards in each country where they operate.

"All participants are required to have approval from a medical doctor in order to start the programme.

"In order to be accepted for the programme some people must do a medically supervised withdrawal elsewhere before they can start."

She also said while its centres are not regulated by the HSE and HIQA, no private drug rehab centre in Ireland is regulated.

She added: "Narconons are regulated in other countries, and we have no problem with this.

"Thousands of people have successfully completed the Narconon programme and enjoy lives free from drug and alcohol abuse as a result."

"Narconon is a drug-free, drug and alcohol rehabilitation programme with proven success."