The European Union has rejected a proposed Middle East 'peace plan' from US President Donald Trump.

The bloc is the latest entity to oppose the deal, after the Arab League said it would not cooperate with the US in any efforts to implement it.

There were no Palestinian representatives at the announcement.

Palestinian leaders have already rejected the plan as a "plot to liquidate the Palestinian cause."

President Trump claimed the plan offered a "realistic" two-state solution - however, there was confusion as he appeared to promise that Jerusalem would be Israel's "undivided capital" - while also claiming that it would "provide a Palestinian capital in East Jerusalem where America will proudly open an embassy."

But this fund will only be released in Palestine accepts the political plan.

The plan would see a future Palestinian state made up of the West Bank and Gaza, connected by a combination of roads and tunnels above ground.

It would recognise Israeli settlements on West Bank land, in return for a four-year freeze on settlements while Palestinian statehood was negotiated.

Israel captured East Jerusalem in 1967 and annexed it - but that move was not recognised internationally.

Tánaiste Simon Coveney has expressed "grave concern" over the plan, saying it "fails to achieve the balance and equality of esteem necessary to gain the support of both sides to the conflict and the international community." 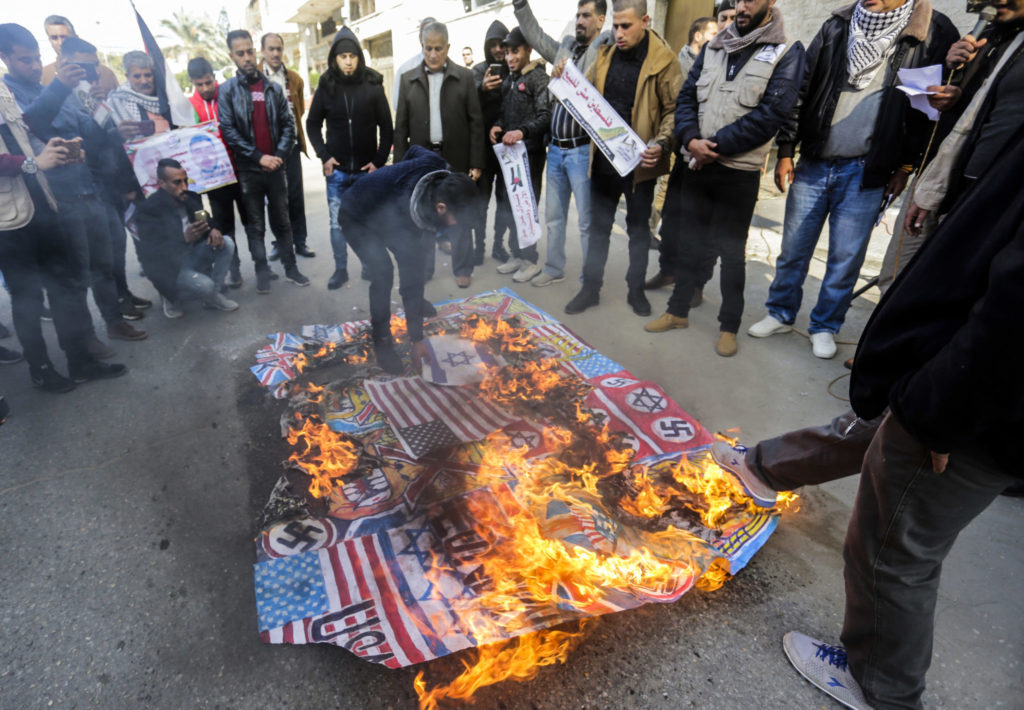 Palestinian demonstrators burn illustrations of the British flag, Israeli flag, and American flag during a protest against the US peace plan in Gaza City | Image: SOPA Images/SIPA USA/PA Images

In a statement on Tuesday, EU foreign affairs chief Josep Borrell said the US initiative "departs" from internationally agreed parameters.

He said: "The European Union is fully committed to the transatlantic partnership and values all efforts to help find a peaceful resolution to the Israeli-Palestinian conflict.

"The EU recalls its commitment to a negotiated two-State solution, based on 1967 lines, with equivalent land swaps, as may be agreed between the parties, with the State of Israel and an independent, democratic, contiguous, sovereign and viable State of Palestine, living side by side in peace, security and mutual recognition - as set out in the Council Conclusions of July 2014.

"The US initiative, as presented on 28 January, departs from these internationally agreed parameters."

"To build a just and lasting peace, the unresolved final status issues must be decided through direct negotiations between both parties.

"This includes notably the issues related to borders, the status of Jerusalem, security and the refugee question."

The EU has called on both sides to "re-engage and to refrain from any unilateral actions contrary to international law that could exacerbate tensions."

It said it is "especially concerned" by statements on the prospect of annexation of the Jordan Valley and other parts of the West Bank.

"In line with international law and relevant UN Security Council resolutions, the EU does not recognise Israel's sovereignty over the territories occupied since 1967.

"Steps towards annexation, if implemented, could not pass unchallenged", the statement added.

Ian Bailey’s latest extradition hearing due to get underway today