A new tax is set to be introduced across the European Union from next January.

The levy on non-recycled plastic waste is part of the bloc's recently agreed COVID-19 recovery plan.

The funds raised will be used to help with the repayment of loans taken out as part of the deal.

It involves a total of €1.8tn, which includes a budget for the next several years.

Some €360bn will be made available as loans, which will need to be repaid.

The vice-president of the European Parliament Mairead McGuinness told Pat Kenny an intervention by the so-called frugal four - the Netherlands, Sweden, Austria, Denmark - meant changes to the deal.

"There is less money going by way of grants to the worst affected member states, it will be more by way of loans".

"And it also talks about own resources, which again has been discussed previously - but now we are likely to have a tax placed on plastic waste to help fund the repayment of the loans which will be taken out.

"So an awful lot happened, and I think we will still by the end of this week be beginning to understand the details and significance of what has occurred over the weekend".

On the plastic tax, she said: "It's interesting that all of the leaders agreed to this".

Text from the document says the first step is based on "non-recycled plastic waste" to be introduced and apply as of January 1st 2021.

This will be made up of a share of revenues from a national contribution, calculated on the weight of non-recycled plastic packaging waste, with a call rate of 80c per kilogram.

Other options include a digital levy by 2023 and also a Financial Transaction Tax. 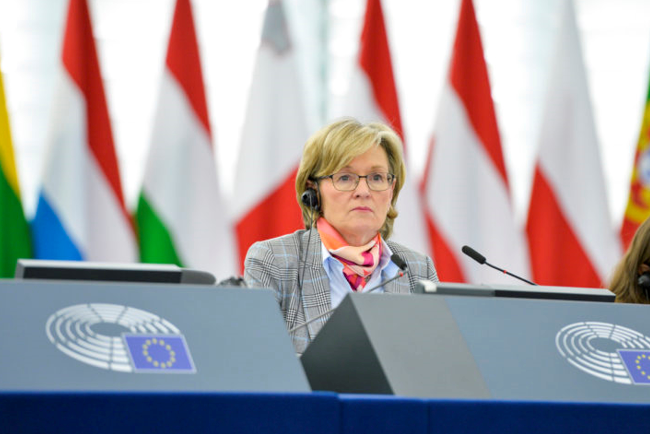 But Ms McGuinness explained: "All of these are on the table - the only one that is scheduled to come into play is the plastics levy, but [there are] no details yet.

"I think we will want to see the specifics, because the commission will have these details they're just not in this particular document".

However Ms McGuinness said the EU budget is lower than what it was expected to be.

She believes this was a play-off, in order to save the bloc's COVID-19 recovery plan.

"It's a deal and I think it's good that a deal was done."

"Nobody's fully analysed the two aspects of this deal: one is the recovery plan, and most of the discussion is around this big recovery package for the European Union, the borrowing of money collectively, how it's going to be repaid and the level of grants and loans.

"But equally important is this MFF, the next budget for the European Union to cover the seven years from January 2021.

"And I think there's been a little bit of play off one against the other - which I think the parliament had warned against - because we will have to ratify what has been agreed by the leaders, or indeed take a different view.

"I've just had an e-mail from the president of the parliament, David Sassoli, so we will be meeting in session on Thursday to do that very analysis.

"But I suppose my overall reaction is given that they stayed together at the table over such a long period of time, and given that some of the discussions were quite - if you like - in your face between leaders, I'm happy that they could agree a package which shows that Europe can collectively agree in times of crisis.

"And now we to see how the details will be teased through, and whether there has been an undue cutting of the MFF - because I think it is lower than what the parliament would have expected - in order to save the rescue package.

"So there's still work to be done on that.

"But it is quite significant, I think we might underestimate what has actually happened.

"For the first time, we have European leaders agreeing to borrow collectively - so the European Union will borrow €750bn from the financial markets, and obviously get a very, very good rate, and then the money will be allocated by way of grants and loans".

On this, she said: "There's no doubt we would be concerned around some of the funding for long-term programmes including agriculture.

"And I think that there are suggestions which I'm looking come in here that there is a cut to the Agriculture Policy - I need to look at the details to see how significant that is".

But she added: "I think one of the reasons the leaders did a deal, despite the difficulties that were presented to them in reaching an agreement, was because even the frugal four or five realised that if there is no recovery of the European Union economy, then those countries couldn't recover either.

"So it was in everybody's interests that we lifted the boat so that we'd all be able to recover collectively.

"And I think that's perhaps why, in the end, despite the problems there was a deal done".

The European Parliament has to give its consent to the new budget.

Main image: Bales of plastic waste are transported in a warehouse in Germany. Picture by: Waltraud Grubitzsch/DPA/PA Images