The sanctions cover the financial sector, energy and transport sectors

The European Council has agreed on further sanctions against Russia for its invasion of Ukraine.

Following a meeting on Thursday, the council says the restrictive measures will impose "massive and severe consequences on Russia for its action".

The council says it will adopt the proposals without delay.

This follows on from previously announced sanctions on Tuesday against several people and entities in Russia.

It also says it condemns "in the strongest possible terms" Russia's "unprovoked and unjustified" military aggression against Ukraine.

It demands that Russia immediately ceases its military actions, unconditionally withdraws all forces and military equipment from the entire territory of Ukraine - and fully respects Ukraine’s territorial integrity, sovereignty and independence.

The council also says it deplores the "tragic loss of life and human suffering caused" by the Russian aggression.

"It stands in solidarity with the women, men and children whose lives have been affected by this unjustified and unjustifiable attack", it adds.

It also calls for "urgent preparation and adoption" of a further sanctions to cover Belarus.

After unprovoked and unjustified military aggression, we stand united with #Ukraine in these dark hours.#EUCO agrees on further restrictive measures to impose massive and severe consequences on #Russia, in close coordination with our partners and allies.https://t.co/FIafJWD7ym pic.twitter.com/q7TRji4D4S

While US President Joe Biden has also announced a new wave of sanctions against Russia.

And he says the US is deploying additional forces to Germany.

Speaking during a press conference at the White House on Thursday, President Biden says "freedom will prevail" after Mr Putin "chose this war".

He says the sanctions the US was imposing aim to "maximise long-term impact" on Russia, while minimising the impact on allies.

The US president says "strong limitations" will be imposed on what can be exported from the US to Russia, which will hammer its access to global exports of everything from commercial electronics and computers to semi-conductors and aircraft parts.

He says: "This is going to impose a severe cost on the Russian economy, both immediately and over time.

"We have purposefully designed these sanctions to maximise a long-term impact on Russia and to minimise the impact on the United States and our allies.

"I want to be clear, the United States is not doing this alone.

"For months we've been building a coalition of partners representing well more than half the global economy." 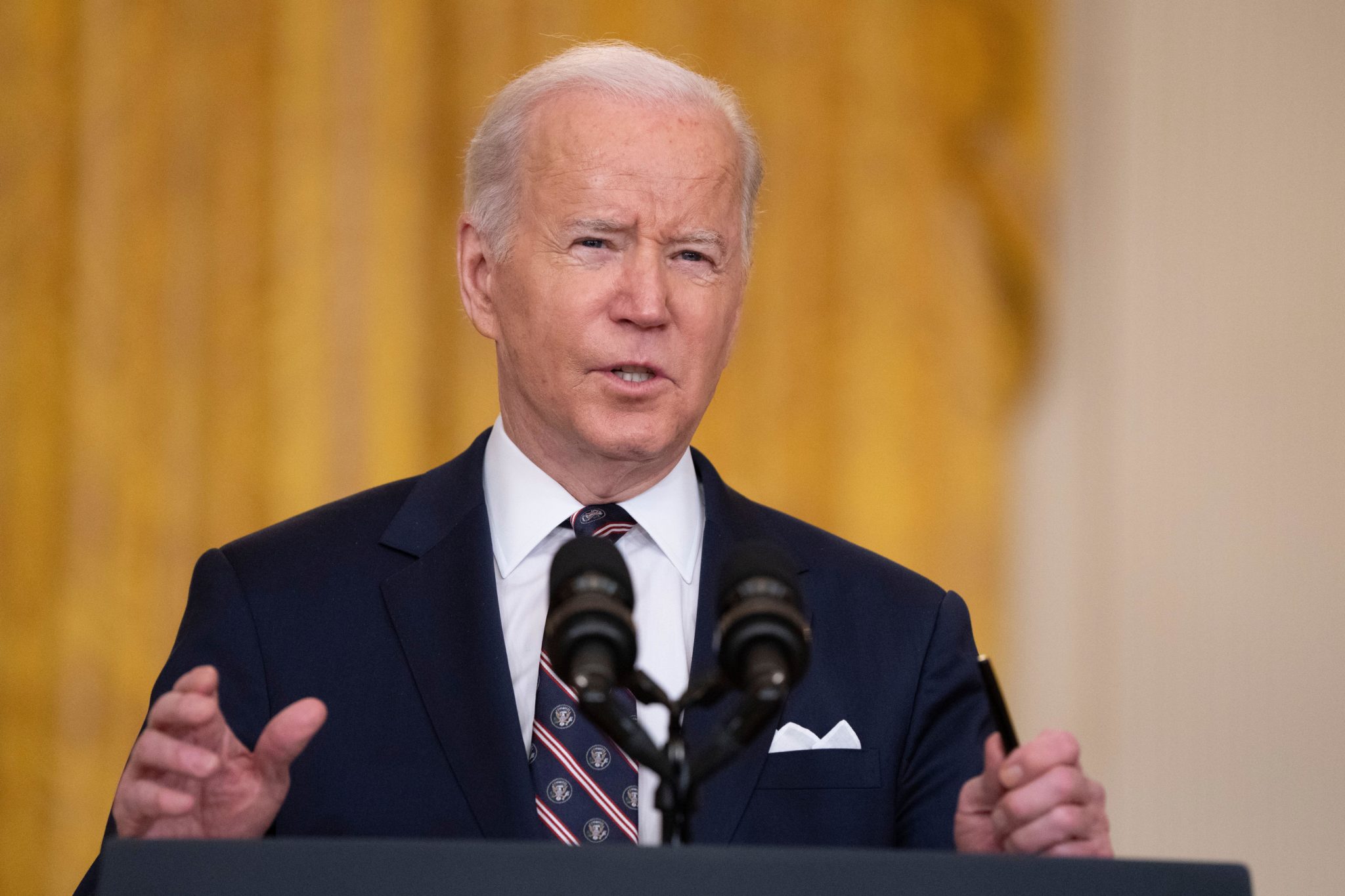 United States President Joe Biden provides an update on the situation in Russia and Ukraine from the East Room of the White House in Washington, DC. Picture by: MediaPunch Inc / Alamy Stock Photo

And Mr Biden says the US will hinder the ability of Russians to finance and grow the Russian military - and reduce their ability to "compete in a high-tech 21st-century economy".

He adds: "We have now sanctioned Russian banks that together hold around $1tn in assets.

"We've cut off Russia's largest bank, a bank that holds more than one-third of Russia's banking assets by itself.

"We cut it off from the US financial system."

The US is also blocking four more major banks, which will have their assets in America frozen.

A number of Russian elites and their family members are being sanctioned.

Mr Biden explains that these are people who "personally gain" from the Kremlin's policies.

He says he estimates the sanctions will cut off "more than half" of Russia's high-tech imports after previously promising "swift and severe costs" if Russian forces moved into Ukraine.

He says Russian President Vladimir Putin will be a "pariah" on the world stage after he authorised a "flagrant violation of international law".

President Biden made clear that while American troops would not fight in Ukraine, the US would help defend "every inch of NATO territory".

A US defence official later confirmed the US will send 7,000 troops to Germany, to help reassure NATO allies who are part of a larger contingent that had already been put on alert earlier this year.

While British Prime Minister Boris Johnson has hit Russia with what he called the "largest set of sanctions ever imposed anywhere by the UK government" - targeting individuals including President Vladimir Putin's former son-in-law.

Downing Street confirmed five further oligarchs who are particularly close to the Kremlin will be sanctioned.

Mr Johnson says that more than 100 businesses and individuals will be tackled in total, including "all the major manufacturers that support Putin's war machine".

He adds that there are also plans to introduce legislation that would limit the amount of deposits Russian nationals will be able to hold in UK bank accounts - and to work with allies to shut off the country's access to the SWIFT payment system.