A police chief in England has hit out at British Prime Minister Boris Johnson for using his officers as a "backdrop".

Mr Johnson gave a speech in the city of Wakefield on Thursday in which he spoke with reporters.

Dozens of officers stood behind him during the speech, which included details on police recruitment.

However, it ultimately became about British politics and the Brexit impasse.

Before the speech began, officers stood waiting for "at least" 20 minutes due to Mr Johnson's late arrival.

And then during the speech, one officer became unwell and was seen on camera sitting down while Mr Johnson was talking.

During the speech, Mr Johnson said he would "rather be dead in a ditch" than ask for any further extension to Brexit.

"It costs a billion pounds a month, it achieves absolutely nothing - what on earth is the point of further delay?" he said.

He also spoke about his brother Jo Johnson's resignation as a minister and MP.

"Jo doesn't agree with me about the European Union because it's an issue that obviously divides families and divides everybody.

"But I think what Jo would agree is that we need to get on and sort this thing out", Mr Johnson said. 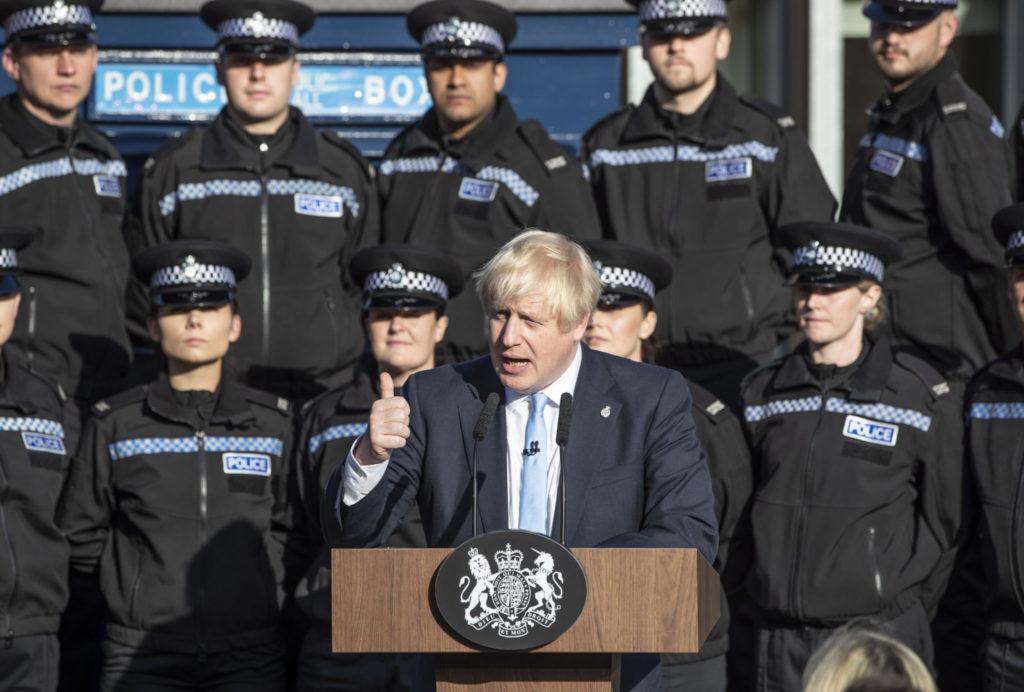 West Yorkshire Police Chief Constable John Robins said the event was originally to announce the launch of a national recruitment campaign for an extra 20,000 police officers.

In a statement, Mr Robins explained that two separate speeches were meant to take place - but that this was changed at the last minute.

"These were a visit to the mounted section, an informal meeting with new student officers, a five minute speech by the prime minister followed by media questions to launch the recruitment campaign and a then a visit to the [National Police Air Service] base where the prime minister was to deliver a 10 minute speech to the media, without police officers present and take questions", he said.

"It was the understanding of West Yorkshire Police that any involvement of our officers was solely about police officer recruitment.

"We had no prior knowledge that the speech would be broadened to other issues until it was delivered."

He added: "Minutes before the speech, we were told that the NPAS visit and subsequent brief to a small media pool had been cancelled.

"I was therefore disappointed to see my police officers as a backdrop to the part of the speech that was not related to recruitment."

Downing Street has defended Mr Johnson's visit, claiming the recruitment campaign had been "welcomed across the police service".

In a statement, the party's policing minister Louise Haigh said: "Boris Johnson has deceived the police by knowingly using officers for a nakedly party political stunt, without their prior knowledge.

"This is a serious breach of trust and the prime minister must immediately apologise for putting serving officers in this intolerable position.

"Boris Johnson cannot even be honest with a chief constable."